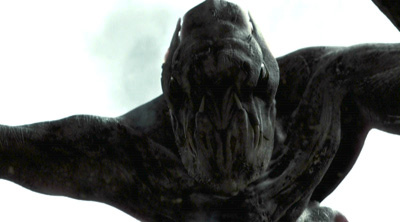 Find in that explanation for the sudden glut of pictures that recognize (in a way The Blair Witch Project recognized almost a decade ago) that our only real access to information in our overloaded age is through incomplete transmissions of indecipherable information. That we can form a gestalt from flicks like this (and Diary of the Dead and Redacted and so on) speaks to our sophistication as disseminators of arcane messages beamed direct from our midnight oracles. When the head of the Statue of Liberty flies down the middle of the street (a moment given away in one of the most brilliant teaser trailers in recent memory) and comes to rest against a row of parked cars, of course the reaction isn't a mob of Japanese civilians fleeing en masse but rather a mob of New Yorkers coalescing around it to preserve the moment, nonsensically, on their cell phones.

The plot moves on 'discovered' footage (like The Blair Witch Project--and Cannibal Holocaust before it, let's face it), with cable-news reports glimpsed therein revealing the first truly nasty surprise of the piece. I started to play ball with it beforehand, however, when something with a tentacle attacked the Brooklyn Bridge while our protagonists were trying to cross it; rich in genre history, thick in its lore, a shrine to Harryhausen at the least, Cloverfield is absolutely winning. It's a picture without pretense and full of the pleasure of making a city-crushing, people-eating monster movie/doomed-romance flick. It's clever enough to present two levels of peril (the building-smashing one and the face-hugger one) and wise enough to offer nothing in the way of explanation for its havoc. In a nod to our contemporary state of mind, bad things happen whether or not good people are paying attention in Cloverfield. The question here isn't who's watching--everybody's watching--but how it could be that, with all the military and technological power at our disposal, the world is still arbitrary and subject to entropy. The better question may pertain to how 2008 mirrors 1958--how a film that could've found itself in good company fifty years ago has been updated (but only slightly) to fit a culture haunted by 9/11 and the rude intrusion of a reality that requires a handshake agreement with the damnedest things simply to be able to walk out the front door. Not so different from Ike's Atomic Café, come to think of it, it's alive with similar threats of things spitting fire and falling out of the sky. Duck and cover and kiss your ass goodbye.

The movie begins with a going-away party for Rob (Michael Stahl-David), whose only string untied is his briefly-requited love for friend Beth (Odette Yustman)--who is, of course, currently on the arm of a Joe Jackson lament. Rob's best friend Hud (T.J. Miller) has his own crush on Zooey Deschanel-esque Marlena (Lizzy Caplan), using a digital video camera as an excuse to strike up a conversation with her. Then the sky falls and a monster and its spawn (or parasites, it's not clear) start ripping up Manhattan. As our heroes go out into the night as spectators, hostages, prey, collateral damage, you name it, Hud keeps hold of his glass-eye buffer and documents their struggle to stay alive until the military affects an evacuation. This includes a flight through pitch-black subway tunnels (where, like in 28 Weeks Later and The Descent, the night-vision feature on his home appliance gives the picture a brilliant visual tweak mid-course); an aborted campaign across the Brooklyn Bridge; and finally a bunker-position in Central Park with some Thing bearing down with inscrutable purpose.

Giving the Thing a purpose, a backstory of any kind, would have been a terrible mistake, and Cloverfield gratifies the most in its reticence to provide literal explanations. What it does instead is underscore the idea that life is composed of fleeting moments of grace littered in there among all the strife and languor of the day-to-day. Opening with incipient missed opportunity, it ends with the statement that "It was a good day," which fails to play as ironic because I think it's meant in earnest--as an idea, simple and pure, that the little moments are enough to hold on to in the face of calamity. It ain't much, but it's plenty, and beyond a few uncomfortable images and echoes of our recent history, the real strength of this 9/11 allegory is its concentration, seven years hence, on how our best hope for survival as a people is to embrace our idealism and hold fast to our noblest, most ephemeral instincts.

THE DVD
I hated M:I:III and am no fan of "Lost" or "Alias", so my resistance to Cloverfield, despite the interest piqued by its ad campaign, was tied intimately to a deep suspicion of J.J. Abrams's involvement as producer. This is the first film shepherded to the screen through his Bad Robot agreement with Paramount, from an idea Abrams hatched with his son upon visiting a Tokyo toy store and seeing a shelf full of Godzilla dolls. Just the prospect of a twisty/turny, pleased-with-itself Abrams confection had my gorge set to rise. Well, this is me eating crow. Director Matt Reeves, a friend of Abrams's since childhood (and director of David Schwimmer's failed bid for movie-stardom, The Pallbearer), provides a feature-length yakker on the Cloverfield DVD that's meticulously-organized, packed with useful and interesting anecdotes, and larded high with what appears to be a completely genuine, not-false self-deprecation. I was edified to learn about how little the cast knew prior to the picture's completion and--irony of the most delicious kind--about how difficult it was to keep everything under wraps in the middle of the information age upon which the film is commenting. Reeves relates how a scene would show up on YouTube hours after they shot it, mimicked by someone's cell-phone cinematography in a way that must have, aesthetically, looked very much like the final product. (It reminds of the bootleggers who'd rip off Edison's short subjects by setting up their own cameras a few feet away.) I also appreciated his story of hosting David Fincher for a day and picking his brain about the intimate peculiarities of working in HiDef.

Unfortunately, Reeves is so able a raconteur that he renders the majority of the special features on this disc instantly redundant. Unfortunate, too, is that so many of the supplements are by themselves redundant, tending to repeat identical soundbites from the same sit-down with Abrams, the only defensible explanation for which can be the expectation that no one bothers to watch these things. Reeves's indispensable yakker adorns a 1.78:1 anamorphic widescreen transfer that buggers standard analysis, given that the intention is uglification. I'll say this, though, that the monster looks awesome and that the CGI transfers well, if not completely seamlessly. In faith, what's a monster rampage movie without a little cheese? The DD 5.1 audio is better than expected--indeed, probably better than it should be, what with a good deal of atmospherics appearing nonsensically from the rear channels (especially during the "crossfire" set-piece). Impressive, but clearly a concession to Hollywood artifice.

"The Making of[...]" (28 mins.) covers almost exactly the same ground as Reeves's commentary, sometimes word-for-word, though I did enjoy the visual of people walking along a plank in a green warehouse and having to pretend that a giant lizard-thing was breaking up the Brooklyn Bridge around them. Having some AD yell directions like, "You hear a 'shreee' roar and when you hear me yell it, yell 'shreee,' that's your cue to react," to a gaggle of extras milling around a fluorescent green room is priceless. Eat that, Actors Studio. Footage of an impromptu birthday party for Abrams and a few hagiographies directed at same left a sour taste in my mouth. "Visual Effects" (23 mins.) talks in detail about the mad complexity of the "kitchen sink" production. The idea to do a big-budget special-effects bonanza through the pixellated lens of consumer products is flat spectacular ingenuity. I was, I admit, wowed by the revelation that even sets I thought to be mostly authentic were, by and large, digital phantoms. I'm getting old. "I Saw It! It's Alive! It's Huge!" (6 mins.) reveals the interesting conceit that the monster was, in the animator's mind, a scared, 30-story tall baby.

"Clover Fun" (4 mins.) is a gag reel featuring three consecutive clips of Lizzy Caplan breaking up that gave me the uncomfortable flutter of a guy falling in love. Four deleted scenes (4 mins.) include optional commentary (not optional at all, if you ask me) from Reeves in which he explains that one of them was too emotional (!) and another not emotional enough (!). Both choices, by the way, show dead-perfect instincts. Two previews--the teasers for the Abrams-directed Star Trek prequel and Indy 4--round out the presentation. Originally published: May 29, 2008.

THE BLU-RAY DISC
by Bill Chambers I know what you're thinking: Cloverfield was shot on DV, so how much better could it look in HiDef? What you're forgetting is how much better it could sound. It took ten years, but a mix has finally come along that seems as revolutionary as Saving Private Ryan's--and you really need Blu-ray to appreciate it. The disc's disorienting, rafter-rattling 5.1 Dolby TrueHD track blows what you hear on the DVD clean out of the water. Detail, meanwhile, resolves more cleanly in this 1.78:1, 1080p presentation. For what it's worth, I'm starting to warm to the incongruity between the lo-fi visuals and hi-fi audio, because whether or not they're working in harmony, the objective aim of both is to put you in the moment. There's only one additional supplement exclusive to BD (though all of the previous extras return and get bumped up to HD), a PIP, Java-based interface known as "Special Investigation Mode" that grimly tracks the whereabouts of our characters--including the monster, a.k.a. "Large Scale Aggressor"--on a satellite map of New York while simultaneously providing related pop-up factoids. I'm normally a Grinch when it comes to this sort of thing, but I must confess I found it kind of charming; it wouldn't surprise me to learn that screenwriter Drew Goddard was responsible for these deadpan annotations: they're so authoritative as to read like part of a treatment. Apparently, there are also some Easter eggs--happy hunting! Originally published: June 26, 2008.