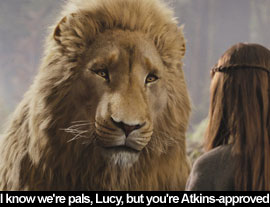 The Penvensie siblings--Peter (William Moseley), Susan (Anna Popplewell), Edmund (Skandar Keynes), and Lucy (Georgie Henley)--are summoned back to the parallel universe of Narnia when exiled Prince Caspian (Ben Barnes) blows on Susan's horn. Shades of Franklin J. Schaffner's Planet of the Apes and Walter Murch's Return to Oz, one year has passed in wartime London and 1300 in Narnia, and the children (who had grown up in Narnia in the first book/film, only to revert to their child selves back in Jolly Old) return to find the fantastic realm overrun with a bellicose race, the strong-arm leader of which, Miraz (Sergio Castellitto), wants the head of our Caspian so that his own son can claim the throne. The "kings and queens of old" and Caspian unite, recalling the legend that King Arthur will return whenever England needs him, bringing the survivors of Narnia's old guard out of hiding to swell their ranks in their attempt to return the land to its rightful protectors. I don't know that the details matter much; suffice to say that Peter doesn't want to wait for the reappearance of Christ-as-Lion figure Aslan (voiced by Liam Neeson) while little sister Lucy does. Flaws abound, not the least of which the deus ex machina that introduces a river god or something into an allegedly monotheistic universe, but the picture also features several moments of real visual power as counterweight, including a flight of griffins aiding in a night raid on a fortified keep and an encounter played against a sheet of ice and an entreaty for blood. There is, in addition, a surprising amount of casualties inflicted by both sides as our heroes suffer failures of judgment and heart

Narnia 2 is bleak and earthbound, not so much a child's wonderland as the perverse looking-glass universe of many of childhood's sequels, from William Blake's "Songs of Innocence" to his blasted doppelgänger "Songs of Experience" through to The Empire Strikes Back and Temple of Doom and Pig in the City. What begins as fantasy metastasizes into sobriety, so that we have baby Peter swinging his broadsword and killing hordes of the unrighteous like the misspent centre of a Children's Crusade. The enemy is less of beguiling "Lost Child" magic and more of the venal, human kind (Castellitto's Miraz is a brilliant villain, all of careful grooming and ironclad logic). The central theme of the piece isn't the discovery of destiny but the slipshod resurrection of ideals that have been lapped by modernity, with the conclusion shrouded in uncertainty and the promise that two of the four children will be exiled from the kingdom. The reaction of Narnian Trumpkin (Peter Dinklage, all wounded dignity) to the saviour children, even after his acceptance of their roles in the coming conflagration, is guarded skepticism. Not a mature film, exactly, but a sober one and, at times, a genuinely thrilling children's war movie complete with death, betrayal, the wretchedness of human ambition, and the small, sterling hope that faith can in fact conquer all if held as a candle against the dark. It's childish, yet fortifying. Originally published: May 16, 2008.