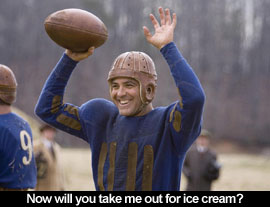 by Walter Chaw George Clooney's Leatherheads is a lifeless, desperate-feeling vacuum that arrives without much reason for being other than to underscore that the Coen Brothers' Intolerable Cruelty was pretty underestimated as an attempt to revive the screwball farce. It's deeply flawed as a comedy, given that the only real laugh has to do with someone being set on fire. And while the instinct is to give it a pass because it's innocuous and slickly done, the other side of that is this giant diagram of a slippery slope. The film's first mistake is casting the flat, increasingly insipid Renée Zellweger as a Rosalind Russell/Kate Hepburn type; the second is its expectation that a screenplay by SPORTS ILLUSTRATED scribes Duncan Brantley and Rick Reilly could have the same kind of oomph as a Charles Lederer or Brackett/Wilder piece; and the third and last is a slowing down of the patter from 45 to 33 to accommodate modern actors' relative inability to do rapid-fire delivery, thus highlighting the first and second mistakes anew. Zellweger further perfects her walking-on-a-rail-whilst-sucking-on-a-lemon shtick (she moves and acts like a puckering hat rack), leaving Clooney--a gifted physical comedian, as his work with the Coens would attest--to carry the load. No help that the Ralph Bellamy in the standard triangle is the American "The Office"'s Jon Krasinski, who'd better get Lloyd's of London on the horn about that fourth-wall smirk. Without it, he's wallpaper.

In Leatherheads, he's also Princeton scholar and Great War Hero Carter Rutherford, who packs 'em in on Saturdays but harbours a deep, dark secret about his alleged valour. Enter sour-puss'd Lexie Littleton, the TRIBUNE's tough-talking, irrepressible, unendurable hard-nosed dame reporter: She's tasked with flashing her gams and bringing Mr. All-American back down to earth. Who knew that her professional aspirations would collide with those of Dodge Connelly (Clooney), a Crash Davis of the pro-football league seeking a cash-infusion for his moribund Duluth Bulldogs with headliner Carter? Y'know what? Everyone knew. Leatherheads' premise is extraordinarily tired, so it relies, utterly, on its execution--and the whole damned thing eventually snaps like an overtaxed rubber band. Still, there's something comforting about the look and feel of the piece; the period detail is exacting and the subject matter, football, is one in which I'm really quite interested, truth be told--which makes the overall disappointment of it that much more piquant.

There's no tension as to whether Lexie will end up with Carter or Dodge, or whether she'll expose Carter's lie, or, finally, what the outcome of the Big Game will be--though I wonder if tension is the point. Leatherheads strikes me as a cloning exercise, a science experiment to see if there's any life left in the Hawks-ian screwball form. As such, it's a failure in almost exactly the same way as Gus Van Sant's Psycho. Sure enough, there's an un-reproducible element in those old classics that even devoted imitation fails to reanimate. Consider a moment where Zellweger and Clooney are shot in movie-star silhouette (the best way to shoot Zellweger, really; she has very nice features when she's not screwing them up like a wrung dish rag) that should be rapturous, nostalgic, you name it, but ends up distracting us because all that the beauty up there on the screen does is trigger nostalgia for the likes of Cary Grant and Barbara Stanwyck. The result is a project so desperate to be quick and quirky that I scanned for Diablo Cody's name in the credits. In lieu of wit, the picture traffics in tonnage, and when the sheer volume of material fails to ignite, it falls back on a few old-timey football games (scored by Randy Newman, natch) that prove that no matter how competent a technical filmmaker is Clooney, he isn't much of an action director. Leatherheads is a quiet variety of disaster--the type that attracts no cults and appears as a curiosity on a few talented folks' résumés for people to try to place in a year or so. Maybe less. Originally published: April 4, 2008.