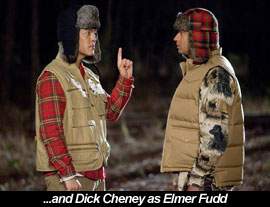 by Walter Chaw The first film was a pleasant surprise for its light-hearted puerility and surprising smarts, and Harold & Kumar Escape from Guantanamo Bay (hereafter Harold & Kumar 2) misunderstands this to the extent that all that's left are the shit and dick jokes and the dispiriting carrying of the new torch that male full-frontal nudity is the ne plus ultra of comedy. When it works, credit John Cho and Kal Penn (and Neil Patrick Harris, reprising his role as the filthiest Neil Patrick Harris on the face of the planet) for their comfort in their roles--and when it doesn't (which is most of the time), blame a lacklustre screenplay that strives for edgy but, like the Judd Apatow school of moral/filth passion plays, is exceptionally conservative, even timid, in its message. All that stuff about smoking pot and saying "vagina" is a smokescreen for monogamous relationships, upholding traditional family values, and a studious avoidance of offending anyone politically in a movie that revolves around an Asian and an Indian getting sent to Guantanamo Bay because the one is mistaken for an Arab terrorist. The contortions the picture goes through to remain innocuous are so awkward (take, for example, the attempts to humanize W. and Muslims) that, in just a few short months, it could become this archaic artifact of the political correctness that's killed the current era in scatology. The flick's only sure target is homosexuality--because, let's face it, the only thing safe to talk about in this context is how much we hate fags. Am I right?

Harold & Kumar 2 picks up directly where the first film leaves off, with our ethnic stoners on their way to Amsterdam to find Harold's new lady-love (Paula Garcés) and, presumably, to carry on in their bud-toking, girl-chasing ways. Alas, they're sidetracked first by Kumar's gorgeous ex-girlfriend Vanessa (Danneel Harris), who's about to marry neo-con knob Colton (Eric Winter), then by racial profiling as some paranoid old biddy pegs Kumar as an Arab terrorist and lands our happy duo in limbo, due to be raped by giant American MP guards offering "cockmeat sandwiches" to their terrorist charges. Stories of American malfeasance are legion, of course, but there's no satirical point here and what passes for humour is Kumar pointing out that every guard is gay, to which the guards respond that it's only gay to catch, not pitch. Crucially, neither side takes a second to recognize that the question of homosexuality in this scenario is secondary (tertiary?) to the essential touchstones that these are American military professionals degrading their uniform and the country they represent--and that the captives are due the full expanse of freedoms and rights because if we do not honour those in our custody, we dishonour ourselves. I know it's fashionable to bash our disaster of a government, but again, I want to draw the line between hating our government and hating our country. One is the quintessence of American patriotism--our duty as Americans, if you will--while the other is simply being an asshole. There's that hoary old Nietzsche quote about hunting monsters and abysses and becoming that which we abhor in the pursuit of it. The rest of the film is less offensive; a portion set in an Alabama ghetto touches on the poignant in its undermining of African-American stereotypes in popular media (take it as an antidote to Street Kings, for instance)--but, sadly, the picture is more invested in shit gags than in the small moments (like two Jewish supporting players sheepishly scooping up seven dollars or so in change) that crystallize the racial conversation this series is most vital when it's addressing.

It has often occurred to me over the past few months that with Barack Obama running for the Democratic presidential nomination, we're presented with a rather unique opportunity to put numbers and demographics to the racism in the United States. That if Blacks come out something like 90-10 in support--with older white voters going the other direction--we can finally put to rest the middle-class flat-earthers convinced that the Civil Rights Movement cured us of centuries of cultural evolution. As evinced by Harold & Kumar 2, what's actually emerged from Obama's campaign is this nervous disassociation with the conversation that piles on justifications for the uglier sides of our base predilections while looking for humour in dicks and pussies. Still, all would be forgiven were Harold & Kumar 2 very funny--if it demonstrated the lightness of the first picture, the fun of its own puerility and hedonism (where's the hamburger gorging? Where's the joy of sex and drugs?), and left off its defenses of Islam and clumsy pinioning of our national intelligence agencies in the character of agent Ron Fox (Rob Corddry). A scene where Harold & Kumar clandestinely attend a Klan rally has been done better at least a half-dozen times in just the last ten years alone; and the extended sequence in which Kumar tries to break up his beloved's nuptial bliss is perhaps the single most tired trope in the romcom canon. The sell-by date of this pic was about three years ago: most of its japes are dated the instant they drag themselves off stage (the worst of which, a protracted conversation with our W (James Adomian) that hardly plays now and won't play in a year) and all the glorious, comfortable interplay between Cho and Penn is wasted utterly. I was really looking forward to this one. Originally published: April 25, 2008.