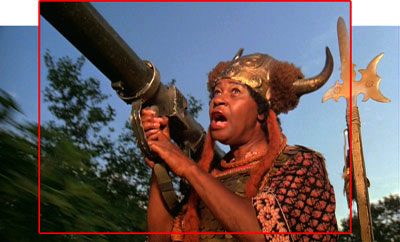 by Alex Jackson I'm willing to pretend that Zapped! is of some historical significance in the annals of exploitation cinema as either the last or the first of its type. Somehow, it reminded me a lot of 1976's minor cult classic Revenge of the Cheerleaders. It belongs in the same general universe, with a vibe that feels a lot more late-seventies than early-eighties. I think Zapped!, like Revenge of the Cheerleaders, was made specifically to be exhibited at drive-ins. The telltale sign is how brightly-lit everything is. Lighting conditions were poor at drive-in theatres, and so studio executives tended to frown when they got back tenebrous product that wouldn't play well in this market. (I vaguely remember hearing that Gordon Willis's work on The Godfather was viewed as particularly risky for that reason.) In this respect, Zapped! looks markedly different from its near contemporaries Porky's and Friday the 13th, both of which feature plenty of night scenes boasting the grungy, unrefined aesthetic of a pile of rotting leaves.

The film appears to be targeted at drive-in audiences on a conceptual level as well. The title Zapped! was chosen because they could create one humdinger of an ad campaign around it. (Sadly, the film's promotional budget was never approved by distributor Embassy Pictures, thus taglines like "Have you been zapped today?" were not properly utilized.) The premise is distinctly high-concept, too: it's Carrie as a teenage sex comedy. Barney Springboro (Scott Baio) is a fairly well-liked high-school botanist who stumbles on a potion that gives him telekinetic abilities. Sexually frustrated from hours alone in his laboratory, he uses his newfound powers to forcibly disrobe buxom female classmates, notably gorgeous cheerleader Jane Mitchell (Heather Thomas--best known then and now for the television series "The Fall Guy"--and her very obvious body double). Zapped! apparently came out too late to make the cut, but with this storyline, this title, and these stars, I could easily imagine it rating an entry in Michael Weldon's The Psychotronic Encyclopedia of Film. The high-concept storyline was an important selling point in the pre-home video age of exploitation cinema; after home video, filmmakers realized that "delivering the goods" (so to speak) was far more important than novelty.

Compared to the truly debauched Revenge of the Cheerleaders, however, Zapped! is surprisingly tame stuff. There's no sex and I don't think I saw more than ten breasts throughout. Our heroes do revel in the sexual humiliation of snotty unobtainables like Jane. The first time we see her, Barney's friend Peyton Nichols (Willie Aames, who would of course play a similar role opposite Baio on the depressingly quintessential '80s sitcom "Charles in Charge") is taking a photo of her underwear and bragging that he's going to publish it in the school newspaper. Yet the film isn't volatile or subversive enough to be called misogynistic. Saying that it hates women is grossly overestimating it--Zapped! isn't cognitively or emotionally mature enough to have an attitude towards women one way or another.

The film's intentional humour has a gentle stupidity to it. In an introductory scene, Barney feeds his lab mice bourbon to see if they can scuba dive while under the influence. And there are actually a few fantasy sequences: Barney levitates his model of the Starship Enterprise and imagines the Star Trek crew navigating around his dog; and Barney's baseball coach, Dexter (the late, great Scatman Crothers), accidentally inhales the smoke from Barney's incinerated marijuana stash and imagines he is bike-riding through a meadow with Albert Einstein while his wife--who won't let him eat salami--chases after them in a horse-drawn chariot. She fires salami missiles (they have the word "salami" printed on them) from a bazooka. I'm not clear as to why she is shooting salami at him if the point is that she is denying him salami. (She also won't let him eat chilli dogs, and the film curiously fails to extrapolate the homoerotic subtext from his hungering for tube-shaped meat.) I know, I know. It's funny 'cause it's dumb. But even in making such allowances, I don't sense that anybody is really thinking about what they're doing.

So what kind of audience would possibly find any of this funny? Well--kids, I guess. I've come to the tentative conclusion that Zapped! is essentially a children's film with boobs. Aside from the drug references, the tiny bit of vulgarity, and, yes, the occasional low-level sexual assault, there isn't a lot in the film to differentiate it from the live-action Disney pictures of the '60s and '70s. When Barney isn't using his powers to tear women's clothes off, he's using them to fix his team's baseball game (shades of The Absent-Minded Professor), cheat at roulette (shades of Blackbeard's Ghost), and fight off bullies (take your pick). In his broad appeal, baby-faced Baio is himself a throwback to the genre-emblematic likes of Kurt Russell and Jodie Foster. ("Family Guy's" Lois Griffin wanted to see Zapped! with Peter because, "I figure Scott Baio is androgynous enough that we can both fantasize about him and nobody would be gay.")

For 'tween audiences, I can imagine Zapped! had a bit of a kick to it. All their lives, they'd gobbled this shit up with a spoon. They'd grown comfortable knowing that these films weren't going to challenge them or offer them any experiences they wouldn't know how to process. Now take this shit and add T&A and you have something special. Certainly, the incongruence of sex and children's entertainment makes for hilarity unto itself, but I think the appeal of Zapped! lies mainly in the way it provides its audience with an emotionally safe environment in which to ogle women. If an eleven- or twelve-year-old watches a true soft-corn "porn" film, they can't very well claim they're watching it for the story. With Zapped!, one is able to indulge in the illusion that the sexual content has context within the narrative. Offensive as this might sound, Zapped! is "porn" for kids. As common decency dictates that we as a society should refrain from sexualizing our children, how could a film like Zapped! circumvent the traditional channels of distribution? Simple: home video. On video, there are substantially fewer barriers between the product and the consumer. Hence, in addition to being one of the last "drive-in" movies, Zapped! is also one of the earliest theatrically-released films to find its niche on VHS--to the extent that it inspired what is, to the best of my knowledge, the first straight-to-video sequel, 1990's Zapped Again!.

On the eve of this year's Academy Awards, Eli Roth hosted a screening of Zapped! with Scott Baio in attendance at the New Beverly Cinema in Los Angeles. Roth genuinely loves the film and was "geeked out" at the notion of introducing it with Baio. He said he first saw it when he was ten and loved it so much that he forced his father to take him to it several more times--further support for my theory that it is basically intended for pre-adolescents. Roth peremptorily defends the film from attack by saying it's clear that everybody involved had a good time making it. He claims that Zapped! is basically a fun movie and a welcome relief at a time when filmmakers take themselves way too seriously. Statements like that inevitably set me off. I strongly adhere to the belief that there are no distinctions to be made between art and entertainment--or "liking" and "good," for that matter. I want to chisel that on a stone tablet and have it be the new law of the land. As soon as you divorce one from the other, they become equally empty, meaningless words.

OK, Zapped! is a "fun" movie and you aren't supposed to take it too seriously--I still wouldn't choose to watch it over No Country For Old Men or There Will Be Blood (two films Roth alludes to in his introduction and then dismisses lest they weaken his case that movies ought to be "fun"). I wouldn't even choose to watch it over any of Roth's three features. Where's his pride? He has the ego to record three or four audio commentaries for each of his films but not to concretely differentiate himself from the hackwork on display in Zapped!? (The cinematographer is Daniel Pearl, who shot both The Texas Chain Saw Massacre and its remake as well as Roland Joffe's Captivity. Alas, under the command of director Robert J. Rosenthal, the movie looks like television.) Eli Roth is hardly one of the great American filmmakers working today and I wouldn't argue against characterizing him as a sort of ersatz Quentin Tarantino. But for the love of Pete, any idiot should be able to recognize that there is more affection for cinema and filmmaking in any single shot from a Roth film than there is in the entirety of Zapped!!

Zapped! isn't especially awful or unwatchable as much as it is vapid and useless. I hate the canonization of the film--no less so as the punchline of a hipster joke on "Family Guy" or in THE ONION--much more than I hate the film itself. Maybe it's defensiveness. Return of the Jedi and Batman were two of my favourite films as a kid and I still perceive something rather profound in them. I'm sometimes accused of concocting lofty rationales for liking pop and my retort, again, is that I have no way of differentiating films that deserve analysis from those that are "just entertainment." What's frightening about Zapped! is that its fanbase doesn't bother attempting to justify it as a good movie. They value it for the decidedly ignoble reason that it marks the first time in their lives they saw partial female nudity in the context of a children's film. There's a transparency to that attitude which invalidates the efforts of anybody trying to celebrate the cinema as a legitimate artform. If Zapped! can be celebrated as simply a novel diversion, that doesn't set the bar very high for everything else, does it?

THE DVD
Unfortunately, MGM's DVD release of Zapped! ignores the movie's following entirely; seems like a missed opportunity to explore the nature of cult films in the wake of a prefab phenomenon like Snakes on a Plane. The flipper disc contains1.85:1 anamorphic widescreen and full-frame (read: substantially cropped) transfers with commensurately adequate detail, though there is minor optical dirt marring the main titles and excessive grain during the darker prom scenes. Colours are bright to the point of oversaturation--it's really kind of garish. Simultaneously, the whole thing looks a little dingy. The Dolby Digital 2.0 stereo audio is muffled with no noticeable channel separation, while an even softer 2.0 mono option is included as well. There are no extras whatsoever: no theatrical trailers, no anti-piracy PSAs, not so much as an animated DVD menu. It's a bargain-bin title all the way. Originally published: March 21, 2008.