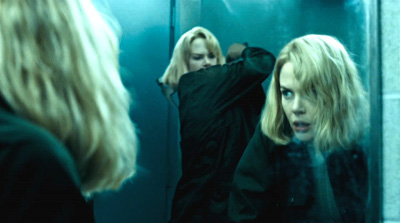 by Walter Chaw SPOILER WARNING IN EFFECT. Jack Finney's 1955 novel The Body Snatchers has proven itself to be of durable stock. Over the course of its first three official adaptations, it's managed to tap the cultural vein--to distil the zeitgeist--in its tale of soulless pod-people replacing loved ones and figures of authority. Something about this specific fear has been an Aeolian harp, essaying the Red Menace of the Fifties (Don Siegel's original Invasion of the Body Snatchers), the new-age cultism and air of paranoia of the Seventies (Philip Kaufman's 1978 masterpiece), the modern military-industrial complex (Abel Ferrara's underestimated 1993 revamp), and now the over-medicated upper-middle classes in German director Oliver Hirschbiegel's The Invasion. If it weren't for the inherent elasticity of the source material, in truth, there wouldn't be anything to recommend the new picture, what with its ridiculous screenplay (by first-timer David Kajganich), deadening proselytizing, and mawkish performances from an assembled cast of luminaries. The Invasion is hopelessly fucked-up in the only way you can fuck this story up: by having a bunch of halfwits impose themselves on it in the vain belief they can reinvent the wheel. It isn't the worst film of the year so far, just by far the most disappointing, and while I really admire Nicole Kidman in some of her independent film choices, her track record of picking real, bona fide stinkers in the mainstream continues with this, her widely-publicized entrée into the $17M/picture club. The irony being--and letting Kidman off the hook a little--that a well-publicized 17-day reshoot with none other than The Wachowski Brothers and their protégé James McTeigue at the rudder transformed what was reputedly a poor-testing, "documentary-like," low-key political thriller into this bullshit.

Dr. Carol (Kidman) is a psychologist who has as one of her patients a woman played by the '78 film's Veronica Cartwright--which should, let's face it, be fair warning to anyone in a movie like this that strange things are afoot at the Circle K. A horribly embarrassing dinner party Carol attends with boyfriend Ben (Daniel Craig) sees dependable Celia Weston trying on a Czech accent and Roger Rees, "Cheers"' Robin Colcord himself, joining the Olivier Memorial Bad Accent Hall of Fame as a tiresome Russian diplomat who tosses a philosophical softball at Carol so that she can prove to the audience that she's more than some bimbo scream queen in a third-rate horror picture. That's not the worst of it: when Ben (spoiling nothing, but stop reading if you're a fucking moron; do I spoil "Hamlet" if I reveal that daddy was murdered by Uncle Claude?) delivers the requisite "join us, it's nice" speech, he urges Carol to remember the time she wished aloud she could be an Aspen tree. It's true. I couldn't believe it either and I was watching the goddamn thing. The entire picture appears to have been written by Kang and Kodos; there's something interesting in here with the idea that world peace breaks out once most of the population is pod-inated, but it's played for light laughs before good scientist Stephen (Jeffrey Wright) takes a moment to dis the human race during the wholly unsatisfying coda. Really spoiling something this time, The Invasion has a happy ending thanks to a cure found from, get this, the immunity demonstrated by Carol's adorable moppet Ollie (Jackson Bond).

Compare The Invasion to 28 Weeks Later. Both are films directed by foreign directors doing their first English-language picture; both involve plagues of a sort that turn friends and neighbours into contagious zombies; and both are socio-political allegories. They also have in common immune little kids, helicopter rescues, and the hope that a cure can be found at the end--but tellingly, only 28 Weeks Later actually has the balls to not wrap everything up in a neat little package while breaking its limp wrist patting itself on the back. I like the synchronicity of the two pictures appearing at roughly the same time (The Invasion, in its original form, was initially slated to open late last year), and I appreciate the opportunity this affords to take a good hard look at the difference between a film that will endure and a similarly-premised film that doesn't matter now and never will. The rationale--the one given by producer Joel Silver as well as millions of moviegoers who care about movies the way johns care about hookers--is that the goal is to entertain, and I respond that things like The Invasion aren't even entertaining. What's diverting about something this predictable, this tensionless? There's a moment where Carol tells her kid that should she fall asleep (thus allowing the alien "spore" to metabolize in her system) he should plunge a hypo of ephanedrine into her heart that the audience greeted with howls of laughter and elbows to the ribs. This isn't entertainment, it's chucking elephant dung at the geek in the pit.

The Invasion is awful and everyone can tell. It inserts worthless flashbacks everywhere they're needed least and flash-forwards where they just don't make any sense whatsoever in the typical fashion of flash-forwards. It's a movie you pity, and you can do that without knowing how storied and remarkable are the other films derived from the same source material--without thinking there's anything special about how the nature of the "pod" has changed from generation to generation. It's a movie you pity because it's stupid, which is all anyone needs to know. Dwell on it too much and find a picture that isn't smart (though it tries to talk smart), isn't political, isn't post-modern, isn't exciting, isn't scary, isn't sexy... I take back that thing about post-modernism, because basically, if there's anything ultimately of interest here, it's that The Invasion appears to be a product of the precise malady it describes. Originally published: August 17, 2007.

THE BLU-RAY DISC
by Bill Chambers Warner brings The Invasion to Blu-ray in a 1.77:1 anamorphic widescreen transfer with a fairly tight grain structure. The presentation is sharp without also being edgy and balances pretty-good dynamic range with excellent shadow detail. Colours are a bit flat, though that appears to be an aesthetic choice. As for the attendant 5.1 Dolby TrueHD audio, the requisite 'stingers' punctuate with authority a marvellously transparent track. Unfortunately if predictably, the disc comes with three 3-minute making-of featurettes--"The Invasion: A New Story", "The Invasion: On the Set", and "The Invasion: Snatched"--that fail to shed light on the more troubled aspects of the production. (In fact, they're perversely auteur-oriented, considering The Invasion was finished without director Oliver Hirschbiegel's involvement. Maybe they're looking for a scapegoat.) Far and away, the highlight of the special features is the 19-minute "We've Been Snatched Before: Invasion in Media History", a somewhat nonsensically-named piece in which the nature of pandemics is loosely woven into the fabric of the Body Snatchers mythos. Therein, one scholar sagely reports that at the top of the food chain isn't man but microbes, our last remaining predator. It's enough to make you grow your nails out and wear Kleenex boxes for shoes. Blade Runner, Return to House on Haunted Hill, 10,000 BC, and Shoot 'em Up trailers plus a promo touting the wonders of Gametap cue up on startup. All of this supplementary material is in HD.