THE ASSASSINATION OF JESSE JAMES BY THE COWARD ROBERT FORD
***/**** Image A Sound A
starring Brad Pitt, Casey Affleck, Sam Shepard, Sam Rockwell
screenplay by Andrew Dominik, based on the novel by Ron Hansen
directed by Andrew Dominik

by Walter Chaw Kiwi director Andrew Dominick's heroically pretentious The Assassination of Jesse James by the Coward Robert Ford (hereafter Jesse James) is a deflated anti-western in the tradition of Peter Fonda's The Hired Hand and Terrence Malick's Badlands. Broadly, it's a magnification of the Nixonian malaise that infected the early-Seventies, its suggestion that things aren't much worse now than they were then complicated by three decades of cynicism. As a piece, it's almost completely sapped of energy, though it isn't deadpan like Jarmusch's Dead Man. No, think of it as more of a dirge: not ironic, but post-modern; not a death march, but mournful. It's how J. Hoberman once (derisively) described Body Heat, a "remake without an original"--Pat Garrett and Billy the Kid corrupted by McCabe and Mrs. Miller, the whole of it shot through with an autumnal soft focus that looks exactly like the reunion sequence that pushes the third act of Bonnie and Clyde. It vaguely resembles an insect caught in an amber sepulchre. Yet despite its obvious pedigree, it is all of itself, infused with the spirit of the now, suffused with author Ron Hansen's transcendental prettiness (the film is based on his novel), and, as framed by DP Roger Deakins's painterly eye, overwhelmingly beautiful. Deakins is given the keys to the kingdom here and every moment of Jesse James looks like mythology pulled through a cinematic loom, often leaving the edges of the frame lanolin-indistinct as they trail off into history. I hadn't thought it possible to see our current crises of faith cast as romantic, but there it is.

Jesse James is very much about memory and legend and how the two combine to produce idealism and hope. Like Ofelia's journey in Pan's Labyrinth, it sees childhood as the blueprint for how adults might aspire to be the heroes of their own lives, and so it finds young Robert Ford (Casey Affleck) jealously hoarding his stash of highly-fictionalized penny novels (of the sort W.W. Beauchamp was writing on English Bob in another western touchstone, Unforgiven) about his hero James under his bed with other sundry relics of his youth. When Ford's belief in James's legend is punctured, his slow leak into murderous resentment leads inevitably to the eponymous execution. It's the only way Ford can envision himself fulfilling his Warholian birthright and assuming a place in the fiction sketched by the picture's tremendous epilogue on New York stages, where his betrayal is re-enacted into infamy.

Early on, though, I was reminded of patriarch Homer's warning to grandson Lonnie in Hud: that "little by little the look of the country changes because of the men we admire"--that our perceived, fictionalized, mythologized history becomes the template into which we slot our behaviour into an increasingly Pirandellian future. Jesse James is a genuinely bitter film and, if you can ever call something this, refreshingly nihilistic. It's so contemporary that it actually has the temerity to suggest, with poetry, that the media fattens the very calves it sacrifices to its own fires. The idea that film is only ever about itself anymore runs parallel to that image--and suddenly the forced, beatific artificiality of the piece acquires this wonderful thematic cohesion. History is doomed to repeat itself and art is doomed to chart that fate, unheeded like Cassandra as endless ranks of new Iliums burn.

The things we venerate are stained irrevocably by our basest instincts for conquest, vengeance, and humiliation, all of it elevated to sublimity on the backs of daemons as unsuited for it as religion or politics. It's a reconsideration of the instinct to venerate the outlaw (something embedded in the DNA of yanks and Kiwis alike, I reckon)--particularly one as peculiar as Jesse James, who, in the last years of his life, became something of a doddering domestic. He rattled around in half-empty houses with his young family as destiny closed in around him like a tide-pool at ebb. Brad Pitt plays James with the jittery, Martian quality that distinguishes his best performances (Fight Club, Twelve Monkeys, Snatch). He acts like a god in a picture interested in explaining the ways of this god to the men who worship him, coming and going like an impure thought, given to emerging from the dark like a Faulknerian catfish and portrayed as though he understands that being an icon means serving as an avatar for other men's unexplored desires. A scene where James arrives unannounced and demands entertainment from his terrified hosts lingers, though not as much as another in which James goes from congenial repose to knife-to-the-throat mania and back again. Wrong, perhaps, to call Pitt's performance controlled--better to call it magnetic and charismatic, as befitting a mythological beast made flesh by a coterie of fawning sycophants.

Jesse James is close to three hours of slow, trancelike contemplation of details of place, character, time. It's the three pillars of science-fiction as defined by J.G. Ballard; the film plays like a western set on Mars, starring bugs pretending to be men. (It feels like it was directed by David Cronenberg if Cronenberg were interested in the Sublime.) A moment wherein James puts his head to a rail to hear the slow thrush of a train rumbling out of the dark, Tyger-bright in Deakins's pitch-black night, echoes the picture's ability to isolate the thrum of this moment in exhausted time. Jesse James is inexorable, the trick being that it transforms our ugly predestination--our complete inability to elevate ourselves above the seedy, fleshy urges hardwired into our monkey brains--into something lyrical and fine. Did I call it "nihilistic"? I meant to say that it was deeply humanistic. The wonder of the film is that it manages to render the one analogous to the other, and to posit that the art of making movies is more than the sum of its intimidating potential: it can also be looking-glass prophecy in all its sanguine and savage implacability. Originally published: October 19, 2007.

THE DVD
by Bill Chambers Warner presents The Assassination of Jesse James by the Coward Robert Ford on DVD in a disappointingly featureless disc. Happily, the A/V presentation more than makes up for it--I haven't been this impressed by a standard-definition image since popping my Blu-ray cherry. The 2.42:1 anamorphic widescreen transfer is razor-sharp but filmlike, with deep, penetrating blacks and excellent shadow detail. It managed to make me feel less remorseful about missing Jesse James on the big screen. Meanwhile, the aggressively directional DD 5.1 audio is lucid and, when it comes to gunplay, forceful. If I have one complaint, it's that Nick Cave and Warren Ellis's score seems a little buried in the mix. Skippable trailers for One Missed Call, 10,000 B.C., The Bucket List, The Brave One, and Bury My Heart at Wounded Knee preface the main menu. 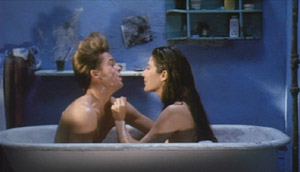 by Bill Chambers Johnny Suede had the good/bad fortune to cast Brad Pitt, because while Pitt's tenacious celebrity assured that it would never go the way of the Dodo bird, since the picture gets its momentum from his performance, his tendency to turn into a space cadet without a well-defined archetype to play (see also: Meet Joe Black) slows its pacing to a crawl. An abstract of drug-addled dilettantes straight out of the late-'70s New York art scene (and writer-director Tom DiCillo's id), Johnny Suede really has no cinematic peer or precedent, and his layers of squeaky-clean rockabilly artifice--the name and matching black suede shoes, the skyscraper pompadour, the two-tone wardrobe--only confuses the pastiche, making it that much more impenetrable. (At least musician Nick Cave, as a sort of future-tense Johnny named Freak Show, seems predisposed to the film's boho milieu.) Consequently, finicky Johnny's metamorphosis into someone who could love the plain Jane, comparatively down-to-earth schoolteacher Yvonne (Catherine Keener, essentially rehearsing The 40 Year Old Virgin) consists of little more than Starman's Pinocchio epiphanies: Despite the fact that Johnny is the quintessential commitment-phobe, the character's Martian framework overrides his utility as a critique of the male ego. Still, both Johnny Suede and Johnny Suede grow on you in a Stockholm Syndrome kind of way, with the latter half's dream sequences steering the film towards the ersatz Buñuel territory of DiCillo's superior follow-up Living in Oblivion--which, as it happens, is turf a lot more accommodating of (and indeed more sympathetic to) Johnny's idiosyncrasies.

THE DVD
Anchor Bay reissues Johnny Suede on DVD in a 1.75:1 anamorphic widescreen transfer that frankly does Joe DeSalvo's cinematography a disservice. Soft, dupey, and flat, the image looks dated despite the 16x9/OAR upgrade from the previous disc; moreover, you would never guess from this presentation that the film was shot in 35mm. For what it's worth, the opening credits are heavily windowboxed, while everything thereafter is slightly pillarboxed. Similarly lacking in clarity, the accompanying Dolby Digital 2.0 mono track sounds like the victim of too much noise reduction. The main selling point of this release is a superb feature-length commentary by DiCillo in which he once again clarifies that Living in Oblivion's Chad Palomino is in no way, shape, or form based on Pitt, insisting he's worked with actors who were "way more pissy and weird." (Could he be referring to Cave?) Be that as it may, he admits that the movie's tempo was regrettably protracted by Pitt, something for which DiCillo holds himself accountable. Mr. Jolie isn't even mentioned by name until almost a half-hour in, though, as DiCillo tells the origin story of Johnny Suede more or less chronologically, starting with his days at NYU. Something of a journeyman, he also peppers the track with colourful asides about studying to be an actor and shooting Jim Jarmusch's career-launching Stranger Than Paradise. The trailer for Mad Money cues up on startup. Originally published: January 28, 2008.