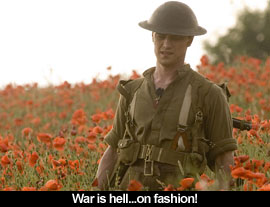 by Walter Chaw No end-of-year sweepstakes would be complete without the requisite bushel of awards-baiting pabulum, rich with a nice, thick vein of glossy pandering. They're movies you're supposed to love: can't-miss, sure-fire formula flicks that bank on their sparkly casts and borrowed prestige the way blockbuster action flicks rely on special effects and the promise of mayhem. Reduce it down enough and the dreg at the bottom of the stew pot is still just making money--you don't reinvent the wheel by following a recipe, and indeed, a good 99% of movies in any given year don't boast of anything new. To say that you like something like August Rush is to say that you hate to be challenged by a film--that escapism is the first and last reason you go to the movies. Where something like Transformers wants to inspire a car- or girl-related boner, something like Atonement wants to ennoble the cineplex arthouse crowd into paroxysms of self-congratulation. It's the same feeling that compels awards bodies to vote for this stuff: mainstream passing as estimable while the real deal flies for the most part under the radar. The more assembly line chunder like Atonement and The Kite Runner gets chosen for Academy recognition, the fewer slots there are available for big studio pics that actually deliver the goods, like No Country for Old Men, The Darjeeling Limited, There Will Be Blood, and Sweeney Todd (presuming, of course, that an impressive number of remarkable studio flicks released earlier this calendar year are already lost causes).

Presented for your pre-minted approval: Joe Wright's costume follow-up to his costume debut Pride & Prejudice, another snooty literary adaptation of a well-regarded British novel likewise starring Keira Knightley, shot in the dappled, golden light of fantasy-novel cover art and housewife shower-nozzle daydreams. I thought of two things while enduring the bulk of Atonement: one, the comment of a good friend and colleague who posited, correctly I think, that novelist Ian McEwan is always fucking with you; and the other that my initial lukewarm reaction to Roger Michell's Enduring Love had a lot to do with me not taking that into consideration. Atonement doesn't take that into consideration, either, turning the mordant, devastatingly understated trauma of McEwan's prose into one of screenwriter Christopher Hampton's period "bad sex" dramas reliant on extravagant turns of phrase and delightful chamber misunderstandings. I was reminded of that episode of "The Critic" where the titular schlub declares an airless, dusty film about a tea cozy to be some sort of masterpiece.

Young Briony (Saoirse Ronan), budding Tenenbaumian playwright, witnesses two events out of context and comes to the conclusion, incontrovertible, that the housekeeper's son Robbie (James McAvoy) is a sex maniac and surely responsible for the ravishing of one of her little pals. Flights of speculative fancy and selective "filling in" are indicted in the novel (the act of reading itself is indicted, truth be told), while voyeurism, it stands to reason, is indicted in the film version. But there are better movies about the obfuscating evils of peeping and misunderstandings and injustices, not to mention better literary adaptations, better romances, and better period pieces. Atonement's familiarity breeds contempt, I fear; this is the most unimaginative way one could possibly have adapted the book, and in its extreme glossiness and glancing off of other awards-popular genres like War and Revenge, it places itself in the proverbial pole position in the race for self-satisfied moneymaking--profiteering without appearing to sell out. The tragedy of the piece, such as it is, involves Robbie's truncated romance with flapper Cecilia (Knightley, still talking out of her jaw) finding its consummation on the night of the false accusation. As the film flies headlong through its jagged, jigsaw shards of broken narrative--time-skipping through the German invasion of France, a brief interlude in Dunkirk, and a dishonestly "clean" killing field strewn with the bodies of French schoolgirls--the two lovers try to reconnect, re-establish the crumbled social strata of antebellum England, and pretend that anybody besides them gives much of a shit.

It's a masterpiece (or at least "Masterpiece Theatre"), though, compared to Marc Forster's simpering, Disneyland version of Afghanistan, The Kite Runner. Based on another highly-regarded novel and drawing to it Hollywood's new Ron Howard, The Kite Runner was delayed for months while Paramount did its best to relocate the picture's Afghani child stars, given a high and apparently dangerous profile either for having the temerity to act out a child rape or, more likely, for having made a lot of American money. Whatever the reason, it drops into the middle of Awards season without much fanfare but with the abovementioned built-in audience, desperate for another story of trying to patch a few of the rends and tears of misspent youth. Glossy as a calendar spread, the film follows the trail of young Amir (Khalid Abdalla) as he evolves from a boy who won't take a stand into a man of courage and action forged in the kiln of current events. (See also: the Jake Gyllenhaal character from the also-bullshit Rendition.) It's an uplift melodrama about growing balls and kicking ass--about going back into the past to address wounds that can never heal, set against the backdrop of a country fallen under disastrous leadership and subjected to an endless progression of ill-planned wars. It's a cozy, brightly-lit, Lifetime-ready fairytale with child rape as a metaphor for the innocence of an entire country bulldozed repeatedly by twin world power molesters until all that's left is this rubble that, thank the gods, Amir is able to recompense through his rescuing of boyhood pal Hassan's (Ahmad Khan Mahmidzada) child from the evil, pederast clutches of the Taliban. Key to the film is that a slingshot is the totem towards certain salvation. Reference to Biblical David? More likely to Huckleberry Finn.

In no time, you feel the tug of the strings of the titular kites used by Forster to symbolize--what, a simpler time? An unrecoverable past suddenly recoverable? It's bald, simplistic, kitchen-sink moralizing cocooned in the middlebrow trappings of coming-of-age/fish-out-of-water/foreign thriller genres, all wrapped up in one unwieldy, stuttering trainwreck of an awards-season movie. Tedious isn't the half of it once you catch a whiff of how this one is going to fuck around with you before getting to the business of being a completely lock-step manipulator, skin deep and untroubled by the turbid waters in which it's splashing around. The Kite Runner is irresponsible--a bull in the china shop of childhood; of the cult of manhood; and of the complexities of the world in which one finds oneself ensnared. Another film about atonement, its very existence and execution betray the idea that the past must be dealt with, the better to face the future; you compare the whole of it to the five minutes Tommy Lee Jones commands the screen at the end of No Country For Old Men, or how no more than sketches animated in Marjane Satrapi's Persepolis convey the painful humanity of time's labour's lost, and you realize there's no one authentic chord in The Kite Runner. It's exploitation--a reductive fairytale that makes everybody feel good. I can't imagine many things more ignoble. Originally published: December 25, 2007.