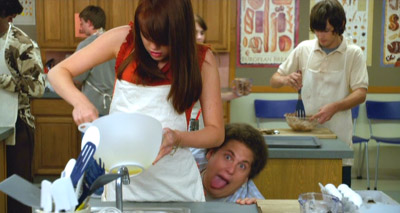 by Walter Chaw Raunchy teensploitation, sexploitation, you-name-itsploitation--it is what it is, and for what it is, Superbad's a fairly decent entry into Judd Apatow's crusade for moral monogamy. What's good about it is unsurprising (Seth Rogen and Evan Goldberg's script is occasionally brilliant--like when one kid speaks of looking into a kind-hearted rival's eyes as "like the first time I heard The Beatles"), and what's bad about it is unsurprising, too, such as its determination to be beloved beneath the crassness and scatology. I've come to the conclusion that this warm-fuzziness suggests not a heart so much a pulled punch; you compare Superbad to something like Revenge of the Nerds and find the latter's themes of fellowship and family are unobtrusive, whereas the former is pushy to the point of searching glances and lingering goodbyes between its best-chum protagonists Seth (Jonah Hill) and Evan (Michael Cera). It's terribly insightful on that point, mind you, that boys of a certain age often hold as their truest and deepest love the friendship of another boy they've known through the war years of early adolescence and high school. When college, or marriage, or even serious girlfriends intrude, men are invited to grow old into their new roles as civilians in the civil sense of the word. If you don't, you have Rogen's character in Knocked Up, or Steve Carell's in The 40 Year Old Virgin--but even if you begin there, it seems this cycle of films is mainly interested in pushing them forward into the realm of the conventional.

Just a philosophical objection, I guess, albeit one that's making it harder for me to watch these flicks without jaundice. Superbad takes place during one long day's journey into night as three buddies do their level best to score liquor as minors, the better to score entry into the party of the semester--the better to score, period. The third wheel, Fogell (Christopher Mintz-Plasse), obtains a fake ID on which he dubs himself "McLovin" and thinks a calf-skin vest makes him look twenty-five. Chief fascination of the picture is the relative and conspicuous lack of a Bully archetype (there is one, but so slight and personal-seeming that it hardly merits a mention), while the most inventive, most hilarious bit has to do with a child's sketchbook and his older version's defense that "it's common, almost 8% of kids do it." Much destruction is wrought, much alcohol is imbibed, and each member of our libidinous trio gets a shot at the girl of his dreams before evening's end, with detours along the way that don't always edify the rest of what's going down. Superbad grinds to a standstill, for instance, when McLovin winds up being taken on a ride-along by the worst cops ever (Bill Hader and Rogen himself).

Obviously intended as autobiographical (or appearing to be autobiographical--the heroes are named after the screenwriters/producers, for chrissakes) though set in the current day, the film screams 1970s, from its far-out opening-credits sequence through to its funkadelic soundtrack and self-conscious wardrobe choices. Its style is its warmest joke; testament to the skill with which it's all been pulled off is that what should by most rights be smarmy in its indulgence possesses a great deal of warmth. Rogen, Goldberg, and director Greg Mottola have made a period piece without dialling back the clock, and in so doing their characters come off as even more lovably retarded. Cera and Hill are perfectly matched: their styles--the one a stammerer, the other a motormouth--complement one another and their shapes do the Laurel/Hardy visual one-two with a charming panache. Cera essentially reprises his "Arrested Development" shtick while Hill, given the lion's share of profane profundity, delivers with a sweaty desperation that does a great deal to humanize the Fat Kid archetype so often abused in pieces of chunder like Unaccompanied Minors (and effectively skewered in Bad Santa). Superbad touches on a lot of truth en route to its moments of compromise--a lot of instances where it appears to be going somewhere dangerous and exciting are crushed into the restraints that nostalgia forces on the material. As a romp, then, as something like Harold & Kumar Go to the White Castle, it has its place, only really losing its way when it forces sentiment on us, as well as in a slight, twilight ending that feels more like a caesura than like a genuine resolution. Originally published: August 17, 2007.

THE DVD
by Bill Chambers Sony presents Superbad on DVD in an "Unrated Extended Edition"* restoring some four minutes of filthy hand gestures and penis euphemisms to the piece. Let me say off the top that prolonged exposure to HiDef has thrown my ability to judge standard definition transfers out of whack (and I tried to get the Blu-ray of this one to no avail, although we do have some cool BD titles in the pipeline), but this disc's 1.88:1 anamorphic widescreen presentation has no obvious flaws beyond a bit of softness that seems forced on the image by DVNR. Though the transfer runs a little 'hot' for my taste, such is the fashion of the day--the contemporary equivalent of high-key '60s lighting. The accompanying Dolby Digital 5.1 audio is surprisingly dimensional--the mix has an unusual amount of flair for a comedy, with voices ping-ponging around the room and the LFE channel never going unused for long. Dialogue is clear as a bell.

Extras begin with a predictably profane commentary featuring director Greg Mottola, producer Judd Apatow (and his 9-year-old daughter, Maude), screenwriters Seth Rogen and Evan Goldberg, and actors Michael Cera, Jonah Hill, and Christopher Mintz-Plasse. Despite being a little overcrowded (at least until 49 minutes in, at which point the Apatows storm out on a wave of fake outrage) and boy's-clubby, it's a fun session with admirably little crosstalk between the participants, many of whom are phoning it in from opposite coasts. More importantly, there are genuine laughs to be had; particularly fond of not only the anecdote involving an old-lady interloper, but also a running gag about James Franco's brother Dave, "the desert island Franco."

Of the scant three deleted scenes (totalling 8 minutes), only the first--wherein Seth and Evan attempt to steal gin from the latter's liquor cabinet--counts as an elision as opposed to an extension. (The third and final is a painfully attenuated version of the semen discussion.) Moving on, "Line-o-Rama" (4 mins.) is the obligatory montage of improvs and virtually indistinguishable from the "Gag Reel" (4 mins.) proper. While I'm unsure of the context for Rogen and Bill Hader reprising their Superbad characters in the subsequent quartet of "Cop Car Confessions" (approx. 2 mins. apiece), they're mildly amusing thanks to the perps having been plucked from a talent pool that includes "The Office"'s Craig Robinson, Apatow himself, "SNL"'s Kristin Wiig, and Justin Long (who appears to be doing a Matthew McConaughey impersonation). For what it's worth, the aspect ratio of these 16x9-enhanced segments inexplicably changes from 1.78:1 to (pillarboxed) 1.33:1 depending on the camera's proximity to the actors.

"The Making of Superbad" (13 mins.) is pretty cut-and-dry, though it does contain one telling moment in which Mottola confides in us that he feels like a "creep" for having just shot a sex scene. For a movie chockablock with X-rated banter. That's my general problem with the Apatow oeuvre: the absolute squeamishness when it comes to confronting sexuality directly (i.e., non-verbally), which gives all his films a sort of pious glaze. (In addition to making them hypocritical, considering their glorification of substance abuse.) As Bryant Frazer pointed out in his own review of Superbad, the most erotically-charged scene in the film is punctuated by menstrual blood and various appalled reactions; in an instant, sensuality becomes feminine disgust. If not Mottola, I wonder who helmed "The Vag-Tastic Voyage" (1 mins.), a Matt Bess-hosted BANGBUS parody created for Superbad that features porn stars Jenna Haze and Aurora Snow--er, I mean, two women I don't recognize. "Original Table Read 2002: Seth Reads Seth" (5 mins.) highlights a read-through of a very early draft of Superbad conducted on the set of "Undeclared" that finds Jason Segel--here flanked by Carla Gallo, Leslie Grossman, Kyle Gass, Martin Starr, and David Krumholtz--reading the part of Evan. Man, what a cast that show had.

Rounding out Special Features, a 3-minute featurette on the "Dancing Title Sequence" (3 mins.) that proves little except Goldberg's influence on the outcome, and a 4-minute excerpt from 2008's The Pineapple Express, a stoner-buddy-action-comedy likewise written by Goldberg and Rogen (who also stars alongside James Franco). On the basis of this clip, I can't say The Pineapple Express looks all that promising, but with the unlikely presence of David Gordon Green at the helm I'm giving it the benefit of the doubt. "Previews" for Walk Hard (which cues up automatically on startup), Talladega Nights, Reign Over Me, Vantage Point, Across the Universe, The Brothers Solomon, Spider-Man 3, I Know Who Killed Me, Feel the Noise, Hostel Part II, "Seinfeld" season 9, Resident Evil: Extinction, The Life of Brian, and Sony's Blu-ray slate round out the platter. Originally published: November 19, 2007.

*I must admit I was pleasantly surprised by the relative paucity of supplementary material on the Superbad DVD and thus proud of the filmmakers for showing restraint, especially in the wake of overstuffed editions of Apatow's Knocked Up and The 40 Year Old Virgin. Then I learned of the existence of Superbad's concurrent Two-Disc Special Edition. Oy.