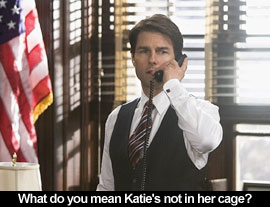 by Walter Chaw Stilted, awkward, an Ayn Rand screed complete with straw men and pontiffs poised to burn them down, Robert Redford's smug, self-satisfied liberal weltschmerz anthem Lions for Lambs is tailor-made for festival-season standing ovations. It's the prime example of why a lot of Republicans get away with calling Hollywood--the single highest concentration of Big Business and corporate interest outside the Beltway--a lefty hotbed of pinko nonsense carried on a cloud of flatulent hot air. It's a prime example, too, of why it's so hard to vote for Democrats even when the alternative is the GOP. Put this one on the shelf between Sidney Lumet's Fail Safe and this year's deplorable Rendition--movies so earnest in their chest-pounding pontification that it's impossible to imagine on the one hand who could be converted by them and on the other who could resist changing their party affiliation out of sheer embarrassment. In this one, the call is for activism in whatever form said activism might take just for the sake of doing something, damnit. To quote a guy writing in the 1920s, "The best lack all conviction, while the worst are full of passionate intensity."

The rest of it is about as fresh, reducing history to this unintentionally appalling shorthand ("Well, WWII only took five years" = the sort of solipsism against which this film rails, casually forgetting the invasion of Poland and the incept of the second Sino-Japanese War) while offering up a character who began her journalistic career in that annus mirabilis 1968--the same year another character received a fifteen-stitch scar demonstrating at a certain Democratic National Convention. It's true: Lions for Lambs is exactly that patronizing and shrill--and it's no consolation that its grasp of history is so facile. That famous quote from some anonymous German at the Battle of the Somme that provides the film's title? Go back farther and find its genesis in Alexander the Great's "I do not fear an army of lions if they are led by a lamb. I do fear an army of sheep if they are led by a lion." It doesn't matter except that every heroic talking head of the piece pounds on the absolute supreme importance of knowing your history. Credibility? Waning.

A kindly old goat of a professor, an oily GOP senator with a new war plan, and a hot-flash-afflicted, dotty old Beltway harridan (Robert Redford, Tom Cruise, Meryl Streep, respectively--all of whom would be cast against these types in a better film) go on and on about how many mistakes were made in Iraq, how we're on the verge of starting a nuclear war with Iran, and how nobody in the United States will really give a shit until that day comes when the government finally forgets the one real lesson learned from Vietnam and reinstates the draft. Forget fish in barrels: if you can't log a few cogent points about the hash Dubya and his Vulcans have made of their seven years in office, you don't actually understand the issues. Lions for Lambs turns a giant grey area into black-and-white punditry of the ugliest, most obfuscating variety. Recklessly chalked up to a given is the irredeemable stupidity of those currently in power; if history shows anything, it's that you do the most harm by underestimating the enemy. Dubya is an idiot, but he's not stupid--you can't do what he's done without some kind of native, animal intelligence.

So that the boredom is kept to non-lethal levels, in addition to all the blather there are a couple of delta force studs crippled on the side of a mountain as the baddies encroach in what's meant to be an eloquent, No Man's Land metaphor for the plight of the American soldier. Not enough that they're the only noble characters in the film, one's black (Derek Luke, of course) and the other's Mexican (Michael Pena, of course, though I also would have accepted Freddy Rodriguez), earning them a long speech by the academic grizzly in which he goes on about their inner city schools and value as noble savages and martyrs. It's the sort of speech that's jaw-dropping, really, in a picture that imagines itself attuned to the common man--encapsulating in a single moment the type of condescension that compels the Democratic Party to so consistently trot out the most out-of-touch, inert, inhuman candidates every election year. Say what you will about the knobs in the GOP--at least they know that enough common folks think that the Dems are all like Redford and so have made it possible for them to vote for stuff they're actually concerned about: who's fucking who in the ass and whether or not they get to go to Heaven once their torturous existence without any social services is over here on Earth. (Not a bad description of Lions for Lambs, come to think of it.) I agree with the politics, but the presentation is robotic, blinkered, idiotic, alien, and presented by the mythical latte drinker Thomas Frank identifies as the great blue-collar bogey manifested in a character who spends a good 80% of his screentime lovingly fondling a pristine, apparently empty Starbucks cup. When it comes down to it, the only reason I'd vote in Lions for Lambs' favour is desperate, hopeless fidelity to party affiliation. A sad state of affairs, for sure, but not for the reasons jackhammered out by this humiliating, ivory tower polemic. Originally published: November 9, 2007.