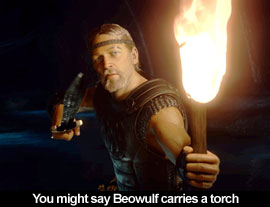 Brave Geat Beowulf travels to Danish king Hrothgar's (Anthony Hopkins) side, the better to slay the monster Grendel, then its mother (Angelina Jolie), then Beowulf's own monstrous son calved by Grendel's mother. Lots of interesting stuff in there about ill-got progeny, a barren marriage bed, the return of the prodigal, the uneasiness of the head that wears the crown, and so on, but it's mostly pretext to stick spears at the audience, throw coins at them, toss limbs, and threaten for long stretches to thrust a penis, IMAX 3D-style, at an audience made justifiably nervous about just such a thing. (To have another extended, pointed game of hide the salami in another animated film this year after The Simpsons Movie is one of the more perverse, inexplicable bits of cultural synchronicity.) It's an instant camp artifact; if Ralph Bakshi had a zillion dollars to spend, he'd be doing stuff like this, all sexualized and high-conceptualized into nonsense. The moment that Jolie's siren emerges naked from a cave pool, her feet shaped just like a pair of hooker stilettos, is the same moment that Beowulf immortalizes into a bawdy sing-along. Either you know the words and like the melody or you don't; there's no defending the piece as high art, though there's something to be said for wanting--and managing--to make a 3D fantasy movie with naked wenches, drunken kings, homoeroticism, and monsters in the modern age. And there's a laudable trend in Zemeckis's two animated pictures, what with this film's hostility towards the Church and The Polar Express' transformation of the Christians' most revered pagan holiday into a freakish, fascistic, paranoid vision of the Third Reich.

A final battle between Beowulf and his boy, ending with a bloody self-mutilation and a poignant reach for a beating, exposed, man-sized heart, gives the picture a healthy dose of soul when its twin marital dramas fail to ignite--underscoring at the same time the film's tendency to deliver in spades only to go down in flames. Give Beowulf credit, at least, for staking for itself the lofty goal of delivering an epic poem on an epic scale, armed with the strengths and weaknesses of its two screenwriters, Neil Gaiman and Roger Avary--the one so steeped in his own mythology that he doesn't seem to care whether his dialogue works better in panels than in mouths, the other so incapable of seriousness that the film seems more of an auto-critique than I suspect Gaiman would have preferred (i.e., straight up, no irony chaser). As it lays, it's a hoot, a testosterone-heavy action flick that plays like a tricked-out and loads more numbing The 13th Warrior. The most disturbing thing about it is the doors that this technology would appear to open to bastardizing any number of canonized works (Paradise Lost, start your trembling); and it comes with the obvious caveat that if you're going to see it at all, find an IMAX venue in which to see it. It's cinema as a pointless, deafening, eye-gouging spectacle (the biggest joke is that it chooses Beowulf as its template)--a glorious vomitorium of impossible digital derring-do that pounds its chest, makes points that no one's arguing, and then goes away without much of a ripple. So it's cool. So what? Originally published: November 16, 2007.