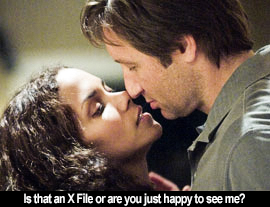 by Walter Chaw I love Danish director Susanne Bier's Open Hearts, the second Dogme95 picture by a woman and one of the most affecting tragic romances I've ever seen. (Much of its power is attributable to a scene where a man, newly paralyzed, dreams of reaching across a small space to touch his lover's hand.) I thought, even given the middling quality of her follow-ups Brothers and After the Wedding, that we'd found in Bier a distinct, exciting talent, an artist interested in charting the course of grief described in the coming-apart of complementary halves and doing so with minimal fanfare or melodrama. It usually would take more than one picture for me to lose the religion, but Bier's done it in brilliant fashion with her English-language debut, Things We Lost in the Fire. Blame her screenwriter Allan Loeb for a goodly portion of this glorious debacle, one that features an early exchange in which a father defines "fluorescent" for his six-year-old son as "lit from within," leading the boy, of course, to pipe up with, "Do you think that I'm lit from within?" Not that Bier escapes accountability: Refusing to let go of her Dogme flirtation, she shoots most of this gas-trap in total silence and extreme close-up, marking this boilerplate tearjerker as uniquely, unwatchably pretentious. It's also maudlin, mawkish, unintentionally hilarious, and utterly devoid of human emotion. The word I'm searching for, I guess, is "alien." After the extraordinary humanism of Open Hearts, to see Bier at the wheel of this infernal exercise in clearing off the mantle is nothing short of horrible.

Doughy, unassuming, Christ-like do-gooder Brian (David Duchovny) gets offed whilst interfering in a domestic dispute, leaving his brittle, deeply unpleasant wife Audrey (Halle Berry) and two adorable moppets to fend for themselves in their autumnal, upscale home. In life, Brian's best friend is heroin junkie Jerry (Benicio Del Toro), who, horrors, is studying to be a mortgage broker as part of his ongoing recovery. Audrey hates Jerry and doesn't like Brian visiting him on Jerry's birthday because she's graceless and completely self-absorbed--but once Brian pushes up daisies, she decides to give Jerry a chance by inviting him to live in their luxury, full bath and shower-equipped garage. I like movies like this in theory, movies that are just non-genre character studies--except that Things We Lost in the Fire is bloated beyond seemliness and plotted like a train wreck. Nothing really makes sense about this scenario as it's presented and performed; the Audrey character, especially, is so shrill and unlovable that you start hoping the title refers to a calamity that includes accelerant, a match, and Audrey tied to a stake. Motivations are trip-hammer and arbitrary, with completely predictable moments of minor triumph loudly telegraphed and smugly delivered, trailed close by reactions so befuddling that you can actually hear brain tumors developing. Any chance at suture is therefore defeated; the picture is best deciphered as an avant-garde, Warholian bit of anti-drama.

Not that it's completely baffling that a woman in mourning would seek a connection to her dead husband through a better understanding of the things he loved, but Things We Lost in the Fire doesn't take the obvious for granted while leaving the obscure for conjecture. It spends so much time explaining what doesn't need explication that moments like Audrey's rage at Jerry knowing where one wayward daughter has been playing hooky becomes, suddenly, the focus of a pocket analysis for a hundred audience-member Dr. Phils. The picture doesn't require active viewership, it requires the brand of psychosis that makes you give a shit about irrational people engaged in absolutely confounding activities with one another. It requires, in other words, that you be as much of a milquetoast doofus as poor, sainted Brian, who can't even trick his six-year-old into ducking his head beneath the surface of a pool. (Ten bucks says Jerry can do it on the first pass.) Moments meant to be emotional leave not a wet eye in the house, while the tide of early praise for this picture in general--and Del Toro's circus performance in particular--suggests that this is the sort of movie that certain members of the critical community, long divorced from any real human interaction, hail as somehow sublime. Things We Lost in the Fire is painful to watch--and not the good kind of pain, the embarrassed-for-everyone-involved kind of pain. Good thing, too: I was liking enough movies lately that I did wonder if I was starting to become inured to the taste of shit. Originally published: October 19, 2007.