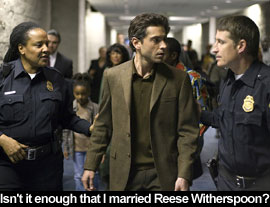 by Walter Chaw It plays the right political/philosophical card for my money, this idea that torture is morally wrong and suspect as an interrogation tool, but it does it in such a patronizing way that by the end I felt as though I'd had a nice, leisurely blow-job. By a toothless whore, to boot. Here I was thinking it was the Neo-Conservatives who believe their constituency to be composed of dim-witted children in desperate need of fables with moral resolutions. Reese Witherspoon is plucky Izzy, the very pregnant mother of an adorable 6-year-old whose movie-star handsome husband Anwar (Omar Metwally), the whitest-looking Arab on God's green Earth, is spirited away by the evil C.I.A. and stashed in a secret prison in North Africa. There, he's tortured for a week while observer/novice analyst Douglas--I shit you not--FREE-MAN (Jake Gyllenhaal) develops an audience-surrogate conscience and James Bond's brass balls. Izzy uses her resources, namely senatorial aide Alan Smith (Peter Sarsgaard), to try to figure out what happened to hubby, while the Evilest Person In The World, Corrinne Whitman (Meryl Streep), plays M to Freeman's Bond. As a native corrective, Gavin Hood's tedious, childish Rendition also offers the Muslim side of things with the soap-opera saga of little girl lost Fatima (Zineb Oukach) falling in with a plucky lad (Moa Khouas) who happens to have lost a brother to the tender interrogation ministrations of evil CIA collaborator Fawal (Yigal Naor), who happens to be the little girl's...wait for it...father. In defense of Hood and his follow-up to Oscar-winner Tsotsi, at least Rendition is just exactly as bad as his first, critically-beloved picture. I predict a different reception for this one, however, because there aren't any black people to feel superior to in this film and thus forgive it its fervent jerking-off.

We know that Fatima is good because she's beautiful; we know that Fawal is bad because he's ugly. It's Aladdin's Middle East character template, and if you don't think it's racist manipulation to have cast the movie like this, try swapping the interrogator and the victim. (Next, Streep--well-past childbearing age and more brittle now than plucky--should be Witherspoon; maybe put Alan Arkin, who cameos as a senator, in Gyllenhaal's role.) If your daughter brings home Anwar, a graduate of NYU who speaks lovely English and earns two hundred grand a year, you're not exactly sweating bullets. At various points in the film, it's useful to ask yourself why a conversation about this topic isn't inspiring anything like introspection or controversy. Is there another side to the torture question? Of course there is. Is it addressed in this film about torture? Only about as much as race is addressed in Tsotsi, white South African Hood's movie about fucking Cape Fucking Town, South Fucking Africa. What I'm saying is, No, not in any useful way. The right speeches are made in long, carefully-posed monologues to the right people in order to best elicit righteous applause from the kind of assholes interested in going to a movie made explicitly to pander to their particular viewpoint. Those who watch this gruel are the same who criticize the sloping foreheads clamouring for the next Michael Bay picture without having the self-reflection to understand that the impulse to get tongue-cleaned by viewpoint-affirming bullshit is one and the same.

It's not that I don't believe there are Americans who can't quite make the connection that the enemy, as it were, is human and that, as humans, will probably react violently to the murder of loved ones and the invasion/occupation of their homeland. It's that this presentation of the impulse that inspires murderous, suicidal rage is made slack and insulting when it's used as a literal cautionary corrective to not the Yankees, but the native collaborator. Is the message of Rendition that if you help the United States, you're doomed to the same treatment? And if that is indeed its message, then whose side are you on? At this juncture in our history, where, in a remarkably, magically short period of time, almost all the good will we've ever had in the world has been flushed down the proverbial shitter, can it be possible that this bleeding-heart picture is actually taking the position that the United States is so evil that anyone wanting to help us out is cosmically ass-fucked? Things aren't nearly so reductive as that, and Rendition, coming as it does in a fall that's shaping up to be one memorable for its complex, mature pictures, distinguishes itself with Antoine Fuqua's Shooter as naive, poorly-thought out, badly-reasoned left-wing(nut) manifestos that give the Right all the ammunition it needs. Originally published: October 19, 2007.