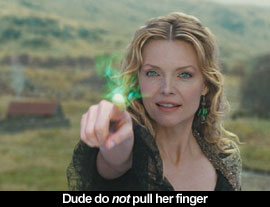 by Walter Chaw I do wonder about films that don't seem to be about anything, but I'll say this at the outset: Matthew Vaughn's Stardust, based on a book by Neil Gaiman, isn't about anything at all--and it's wonderful. Far from empty-headed, though, Stardust is a deeply meaningful series of sweet-nothings, wholly apolitical even in a macho supporting character revealed as a cross-dresser and hair stylist; and by its end, it wins not in spite of being so exuberant in its indulgence of flamboyant clichés, but because it is. It's so much better than the trailers and Gaiman's track record as a novelist (his métier is decidedly rooted in the comics) would lead you to believe, while the inevitable comparisons to The Princess Bride are misleading because The Princess Bride is a piece of shit. A beloved piece of shit, but a piece of shit just the same. On the contrary, Stardust is extremely well-made despite an opening half-hour that boasts of a few too many long establishing shots, directed with real snap by Guy Ritchie's former producer Matthew Vaughn (who did the same with Layer Cake) and executed by a stellar cast that includes a literally incandescent Claire Danes as a fallen star named Yvaine and Michelle Pfeiffer as a hideous bitch goddess, which, given that Stardust follows on the heels of Hairspray, appears to be the vehicle of her late-career comeback. More difficult to embrace is Robert De Niro as the film's Dread Pirate Roberts, a fencing mentor who happens, in this incarnation, to be a ballroom-dancing guru as well. The instinct is to recoil, but damned if it isn't the first De Niro performance in his self-parodic period that's both spot-on in its auto-satire and funny to boot.

Our hero is Tristan (Charlie Cox), the farm-boy Wesley transformed into a "shop boy" who's ennobled, in one of those stupid romantic conversations that only work in melodramas like this, by a rhapsody on the potential of little shop boys to become king that Shopgirl herself Danes imbues with a lovely weight. Tristan believes he's in love with vapid, vacuous Victoria (Sienna Miller) and promises to bring her a piece of a fallen star as proof of his love. Who knew that stars came in the form of Yvaine? Or that a star's heart, especially in full bloom, is coveted by witches for its eternal-youth-giving properties? Stardust is by turns gruesome and giddy, its climactic duel between Tristan and the would-be heir to the crown of a mystical parallel universe (something Gaiman explores often, to varying degrees of success) distinct and delirious in a summer already full of surprising action sequences. It's out-sized and romantic, and if every cringe-worthy line comes haloed in a comic panel bubble, more's the rightness of it in light of Gaiman's specific genius. Stardust is a comfortable film for Gaiman enthusiasts: this is what the guy's good at, relieved of the exposition the novel form demands; here're the author's stripped-down fairy tale archetypes decanted into pulp form, tapped out without embarrassment and full to bursting with joy.

No less mannered and artificial, Steve Buscemi's Interview, his honouring of martyred filmmaker Theo Van Gogh's 2003 picture of the same name, is a millennial sex, lies, and videotape that begins at the same place (digital as lies) and ends at this place (digital as truth). In-between, disgraced war correspondent Pierre (Buscemi) and soap starlet Katya (Sienna Miller, again) engage in an evening of gamesmanship that has all the dynamism of a night out at the local one-act play festival. Tedious at least, Interview is vaguely insulting in how it disdains anything approaching usefulness in as pretentious a way as possible. To ape a popular turn of phrase, the whole film plays like a commentary track of the damned--the lesson plan for a particularly solipsistic absurdism course. Where Stardust is silliness elevated to sublimity, Interview is silliness ground into a navel. Stardust is so stupid it's brilliant; Interview is so smart that it's reductive and moronic. Pierre has issues, Katya has issues, and together they discover that the aggregate of their terrible stories still doesn't amount to a hill of beans. People are opportunist assholes, horny animals, and driven to turn every personal tragedy into politics and profit--so how is Buscemi different? Or Van Gogh, for that matter? Better to turn that unblinking digital eye on themselves to see the truths embedded herein. Interview is interesting only because of its tragedies, one part "no shit" and one part "who gives a shit?". Should it be this telling that Miller as cunning is so much less than Miller as prize? Originally published: August 15, 2007.