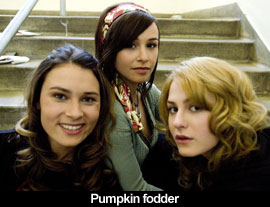 by Walter Chaw If Rob Zombie ever decides to direct a horror movie, watch out. To date, up to and including his remake of John Carpenter's legendary Halloween, he's presented us a series of family melodramas peppered with modest genre references and exploitation flourishes. His best film, The Devil's Rejects, is widely misread and underestimated, the most common complaint being that it isn't scary. It's a lot like complaining that Ordinary People isn't scary. But I'd challenge anyone to come up with many more ebullient, honest moments of uplift than the conclusion of that film (set to "Free Bird" of all things), as Zombie's miscreant clan makes a bid to let their freak flag fly in the middle of the American desert. His pictures are throwbacks to the Seventies in more ways than their relationship to drive-in and grindhouse fare: they're lovely odes to a sense of frustrated possibilities in a United States suffering the first throes of post-Sixties culture shock. It goes hand-in-hand with the Nixonian westerns littering the popular culture in the new millennium; no surprise to me that this administration--and the attendant feeling of paranoia and cynicism befouling our air--encourages this kind of revisionism, and really, who better than Zombie to helm an update of Carpenter's seminal slasher?

Unfortunately, what's good about the picture has a lot to do with what's wrong with it, too. It's reverent of the source material--enough so that for long stretches it plays a bit like Gus Van Sant's Psycho: that is, as an experiment in post-modernism not without its fascination but certainly without much tension. There's fun to be had in spotting Udo Kier, Ken Foree, and Brad Dourif in cameo roles (meanwhile, Zombie's standard company returns, his wife Sheri Moon turning in a wonderful performance as our bogeyman's stripper mommy), but it's distracting as well, almost too much like a rib-chucker (think The Howling--and sure enough, there's Dee Wallace as the adoptive mother of hero girl Laurie (Scout Taylor-Compton, also attached to an upcoming April Fool's Day remake)) that only ever really worked when John Landis gave it a shot with An American Werewolf in London. What's different is the folding of Halloween II's creation myth into the fabric of this one (that is, that Laurie is Michael's (WCW alumni Tyler Mane) sister); an epilogue that injures the remarkable spatial intelligence of the piece; and a long prologue that gives Michael an involved backstory that doesn't so much explicate as simply show. Malcolm McDowell is flat in the Donald Pleasance-originated role of Dr. Sam Loomis, and the character's part in the mythologizing of Myers is raised, then dropped. (It's interesting to me that this picture and the upcoming The Assassination of Jesse James by the Coward Robert Ford both concern how America's long tradition of venerating ugly outlaw heroes only flourishes with the intervention of the machine of commerce.) Surface interest and technical proficiency aside, though, at the very bottom of it Halloween just isn't very scary--or even very tense.

Our introduction to Laurie comes as she teases her mother about a local hardware-store owner going out of business, a man who, according to her, was a filthy old perv--and its epilogue takes place in the crumbling attic (the "headspace," as it were) of the Myers's long-abandoned homestead. Zombie makes this material very much his own in that way: where the original was surprising in its treasuring of childhood, this version is obsessed, as each of Zombie's pictures has been, with the ultimate tragedy of shoring up dykes against the rage of inexorable change. In light of that, it's only logical that the first part of the film introduces 10-year-old Michael (Daeg Faerch) through animal mutilation, his getting bullied at home and at school, and the seeming sublimation of his sexual feelings for his mother and older sister (Hanna Hall). When he finally dons the Shatner mask (buried for 17 years beneath the floorboards, as it were, literally and figuratively) on a quest to find his lost baby sister for purposes, The Searchers-like, unknown, there is the sense that the piece is suggesting, slyly, that Michael might be disappointed with how the great big world outside has corrupted his last blood relation.

The film takes on an allegorical feeling, then, and Michael's quest, while not quite John Ford-ian in its scope, is at least imbued with an ineffable sensation of destiny that is delightful, if intellectually so. Zombie's sense of space is wonderful--in stark contrast to the first picture, where each kill is a magnificent but almost dreamily disconnected set-piece, here you feel as though Myers is moving willy-nilly from home-to-home in suburban Haddonfield, guided by voices. None of it's quite capable of making Halloween exciting, alas, and the lingering question as to whether the great monsters of the cinema should ever get a backstory scores another resounding "no." At the end, it's more like A.I. than it is like anything else--the story of a mechanical boy abandoned by his mother, in search of a family and authentic emotion and left to founder in the clashing sensibilities of two auteurs: early-'80s fairytale teller John Carpenter and early-'00s diarist of the family reserve Zombie. Originally published: August 31, 2007.