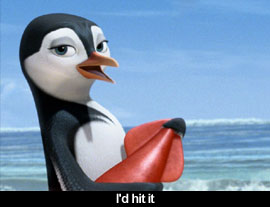 by Walter Chaw I guess it's fair to say that Ash Brannon (Toy Story 2) and Chris Buck's mockumentary Surf's Up is a successful send-up of the Endless Summer-style documentary recently revived by Stacy Peralta's Riding Giants--but its triumph as such is relegated to so microscopic a genre that its usefulness as satire is negligible. It might delight a few guys who revere Bruce Brown's waterlogged hagiographies or, closer to the vein, the handful of folks who'll actually recognize that surf legends Kelly Slater and Rob Machado make cameos--but we're a long way here from a roomful of toys coming to life when their owner is gone, and while it's tempting to laud Surf's Up for being ambitious, it's frustrating that the picture has to dedicate a tedious amount of time to the usual slapstick gags just to apologize for its obscure premise. Far from condemning it as the next Shrek, though, I'd say the worst thing about Surf's Up is that it's clever enough to leave you expecting more--and inoffensive enough (unless scenes of a primitive tribe of cannibal penguins can somehow be traced back to Native-fear flicks or intolerance towards Polynesians) to leave you wishing some of the "nuggets" its anachronistic Chicken Joe (Jon Heder, in the first performance of his career that didn't leave me wanting to punch his mother) mentions were in more obvious display in the filmmakers.

Surf's Up eventually succumbs to underdog sports intrigue (more The Karate Kid than Hoosiers), complete with undersized hero Cody (Shia Labeouf), love interest from the right side of the tracks Lani (Zooey Deschanel), muscle-brained enemy Tank (Diedrich Bader), and a Mr. Miyagi-cum-The Dude mentor, Geek (Jeff Bridges). Cody hails from a tiny, blue-collar burg on the coast of Antarctica, dreaming of riding giants in an annual surfing competition that once claimed the life of his hero, mysterious Zen surf-god Z. If there's still any question in your head at this point as to whether Cody ends up with Lani, or the true identity of Geek, or how Geek needs Cody to teach him something, too...then I can't help you. Failing as satire and, now, failing to provide something new in its structure beyond the occasional breaking of the fourth-wall and the This is Spinal Tap awareness of the camera at all times--even when that camera is in impossible places (I know, I know)--what Surf's Up has left is its remarkably able voice acting. Bridges, especially, has the perfect pipes for animation, and unlike emetic vacuum Cameron Diaz, so does Zooey Deschanel. Both contribute actual performances (they're all good, really, maybe something to do with the decision to record the cast together rather than separately) instead of celebrity endorsements, and they become the backbone and heart of the piece, manufacturing against all that sentimental, rote dross something that feels emotionally substantial. A closing shot of Cody hanging ten in a tube with Geek pings off a so-subtle-it's-almost-not-there surrogate father subplot, a tiny tuning fork in perfect pitch. Again it makes you wish the rest of the film were as meaty and melancholy.

Surf's Up is a serviceable, mostly harmless, occasionally dull/occasionally inspired picture that boasts gorgeous animation and might end its life transmogrified into some kind of weird cult flick for surfers. There are moments, in fact, where I thought the picture picked up on the spirituality of surfing for its acolytes in ways unique and thrillingly opaque. Unfortunately, these moments are sandwiched by many others that are simply perfunctory or lax. A trio of penguin kids, for instance, serves little function beyond the "awww" factor--the time would perhaps be better spent on further developing frayed threads like life passing the legends of the sport by (who is Z but a stand-in for Greg Noll?), that lost-daddy suggestion, and/or the march of corporate assimilation represented by Don-King-like promoter Reggie (James Woods). There's nothing terribly wrong with Surf's Up except that it has nothing in particular to say while relying on a lot on gags that younger kids won't get and a lot of surfer in-jokes that most people won't get, all without offering a compensatory amount of real pathos in its relationship dynamics. The film reminds quite a lot of last year's Over the Hedge in that it's somehow workmanlike in its impressive artistry and carries with it an overriding sense of genuine missed opportunity. Surf's Up seems like a personal project compromised with the need in the United States for animation to be for children; think how sick the barrel of it would be if it were brave enough to be as insular, rebel, and alien as its subject--the quintessence of radical pastimes--defines itself to be. Originally published: June 13, 2007.