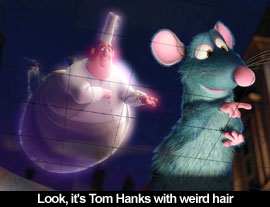 by Walter Chaw Brad Bird's latest film Ratatouille is the auteur's affirmation that it's possible, no matter the station, to find genius among the rabble. It's charmingly egalitarian, this idea that any class or creed can produce the next Einstein or Baryshnikov, and it seems a direct response to the critics of his The Incredibles who would say that that superhero film's mantra of "if everyone is super, no one is" is an embodiment of intolerance and classism. Ratatouille's answer is a lot like the one offered by Bird's feature debut, The Iron Giant: that not only is it possible to overcome one's basic programming, but also that choice supersedes predestination and, moreover, that a basic morality governs the actions of all things. A lot to put on the doorstep of a film about a rat, Remy (voiced by Patton Oswalt), who wishes he could be a chef in the kitchen of idol Gasteau (Brad Garrett)--but Bird, in the course of just three films (and stints with "The Simpsons" and "The Critic"), has forged a pretty formidable ideology based on, of all alien things, the sociology of common sense. Some people are more gifted than others, some people are assholes, and most people are idiots; just as an understanding of race and gender comes with the acceptance of basic differences, so, too, does understanding within a culture only come through a similar acceptance that some people are super and others are simply background.

Again in tension with the thesis put forth in The Incredibles, the human protagonist of Ratatouille is hapless Linguini (Lou Romano), a spaghetti-thin dork with a sterling genetic pedigree who happens to sport no benefit from his biological inheritance. A garbage boy in the late Gasteau's kitchen, he spares Remy's life and, like a lot of fables about single acts of compassion, is rewarded with Remy as the "elf" on his shoulder, commanding his movements like a master a puppet. Together they form an Iron Giant pair of diminutive and (relatively) mighty. There's something attractive about that image for Bird, clearly, and we're gifted in Ratatouille with great stretches of physical comedy as Remy and his host learn to synchronize their movements into culinary poetry. More tricky is Linguini's courtship with Colette (Janeane Garofalo), a character professing ruthlessness in getting to where she is in a male-dominated profession, yet endowed the picture's most graceful moment when she expresses genuine hurt at her inability to be contrary to her kinder nature. It's that devotion to the simplicity of essential decency (as embedded in the essentially decent) that gives Bird's work its grace. Find it as well in the titular Giant's borrowed morality in The Iron Giant and Mirage's act of valour in The Incredibles; at their best, Bird's films are about man's best intentions honoured through a thousand tiny acts of humanity.

The key to the picture is dour food critic Anton Ego (Peter O'Toole). Set up as the bogey and blamed in part for the premature death of Gasteau, he is by the end of Ratatouille revealed to be an Incredible. Charged with hating food, he responds, as good critics will, that he loves food enough to be offended when it's mangled. (Bird's involvement with "The Critic" is honoured here: Jay Sherman was a klotz, but a sincere one.) The last third of the piece tasks Remy and Linguini with preparing a dish that will impress the critic. To spoil nothing, in a moment of great, surprising beauty, they succeed. There are a lot of surprises in the course of Ratatouille, its great flights of comic invention alternating with effective, light, emotional interludes, but the greatest surprise is the effortlessness with which Bird manages to entertain while establishing subtle, solid footholds for the things that are important to him. At first glance, this is Bird's lightest film; upon further reflection, it deepens into perhaps his most substantive. In dealing with issues of friendship, it has more maturity than the imprint-morality of Hogarth/Giant (and Hogarth/Dean), while in dealing with issues of family, the lengths to which it goes to erect a workable nuclear unit with a colony of thousands of rats, an irascible foodie, and a boy and his girl make the film's extended family no mere prefabricated Eisenhower unit. The illusion of lightness is more difficult, by far, than the construction of gravity, and Ratatouille, in its incomparable ebullience, achieves genuine uplift in its portrait of the courage to aspire and, especially, of the audacity to embrace another's dream. Originally published: June 29, 2007.