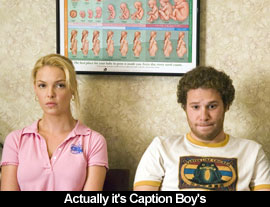 by Walter Chaw As a dyed-in-the-wool fan of Judd Apatow's work with Paul Feig on "Freaks and Geeks", I mark in his solo efforts (The 40 Year Old Virgin and now Knocked Up) a preoccupation with going to Hell. ("Freaks and Geeks", on the other hand, mainly about not drowning whilst wallowing in hell.) I mean that not only theologically, but also biologically and emotionally--Apatow's are comedies about worrying that you're not where you're meant to be at certain milestones in your life, and moreover, that you might never get there. Being forty the critical point in his last picture, here it's articulated in an exchange between slacker king Ben (Seth Rogen) and his sad-eyed father (Harold Ramis), where the expectations of embracing responsibility are passed as fear and regret from a man to his son.

Without getting too reductive about it, Apatow is a moralist painting in scatology (the better to catch middlebrow flies)--and Knocked Up, the movie in a lot of ways that Shrek the Third should've been, slots in comfortably next to the upcoming Evan Almighty as fine, upstanding pictures no matter their surface irresponsibility. They're metaphors for the inner life of the Young Life noviate, seething with hormones barely restrained by scraps of conservatism and defined by the helpless hypocrisy of someone who used to be a freak or geek and is now a successful movie director married to Leslie Mann. No wonder this mania with having the Wedding Crashers end in holy matrimony--is it even possible to write losers as winners? Useful to compare Knocked Up to The Graduate (Dustin Hoffman winds up with Katharine Ross only in the movies), then to note that The Graduate is a classic not because Ben wins his lady fair, but because it finishes on a deeply ambiguous note regarding this achievement. The Graduate ends right when the fantasy of love does; Knocked Up speculates that at the end of desire comes the joyful/sober eruption of domesticity.

Knocked Up also reminds of The Graduate in that it, too, defines a generation through ill-advised sex and the unlikely relationships that spring from it--the decay of the Flower Power ethic against the mid-millennial dysfunctional fad of Born Again-ism. Both films use beautiful women as mostly-blank sounding boards for the lunatic inadequacy of their male counterparts, but where marginalizing The Graduate's Elaine pays off in great draughts of pointed irony, marginalizing Alison (Katherine Heigl) feels too much like geek-empowerment fantasy. Knocked Up will be hailed for its writing, for its sympathy with a vaguely terrifying Algonquin Round Table of literate losers, but Alison (the joke of the film being that she is way, way too hot and successful to be impregnated, voluntarily, by Ben) is written in the film as having no friends to speak of, no men in her life despite her undeniable beauty, and saddled with a desperate character arc that is essentially her trying to convince Ben to be a father to his child. The surprise that's hard to take isn't that Alison gets drunk the night of a coveted promotion and falls into bed with the wrong guy--it's that she spends the rest of the picture molding Ben into Mr. Right. If Apatow weren't where Apatow is now, Ben's true nature would assert itself and Alison would, rightly so, be the one that got away.

Knocked Up is at its core traditional enough that almost none of the sharpness and anger radiating out of it can be taken seriously; as observational satire, it lacks the outcast verve that comes with real outrage. It's neutered. Having just delivered a seminar on Albert Brooks's Lost in America, it occurs to me that for all of that film's entertainment value, its message about 1985 and the height of Reagan's run in office is chilly, bleak, and nihilistic. Knocked Up, on the other hand, is achingly sincere and hopeful. Understand, there's no crime in that--the problem is, it's so dedicated to its message that it makes Alison a feckless loser who becomes mensch lubricant.

Faring better is sister Debbie (a brilliant, sexy Mann), stuck in a fairly horrific marriage to schlub Peter (Paul Rudd) and responding to it with acid screeds and injured postures. When she and Alison are denied entrance into a nightclub by a sympathetic bouncer who patiently explains to the pair the perceptual handicaps suffered by pregnant and "older" women (in clubs, sure--movies, too) before revealing the sacrifices he's been asked to make in the pursuit of his own profession, Debbie launches into a lovely, complicated series of devastating observations. In Debbie and Peter, find the black heart and satirical promise of Knocked Up: a film eventually so bloated (its 132-minute runtime is preposterous) with patter that, however well-metered that patter may be, it's fair to wonder how anyone could stand Ben and his crew for ten minutes, much less someone with as much going for her as Alison ostensibly does. By focusing on the wrong couple, Apatow has made a movie about Family Values that, if you stop to think about it for even a second, begins to seem dangerously intolerant--all the more so for being consistently smart and funny. Originally published: June 6, 2007.