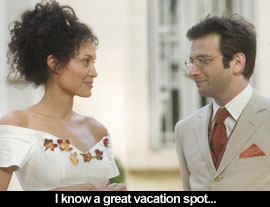 by Walter Chaw An avowed Michael Winterbottom fan, I think he's amazing even when he fails. I marvel at his Thomas Hardy adaptations--the devastating Jude and the redemptive The Claim (his take on The Mayor of Casterbridge)--and I hadn't thought, before I actually saw him do it, that anyone but Charlie Kaufman would have a shot at turning Tristram Shandy into a viable film. When the extremely prolific Winterbottom decided to explore how music and sex evolve sympathetically in culture, he turned out a little unofficial trilogy (24 Hour Party People, Code 46, 9 Songs) in the span of two years. And now that he's become politicized--something he would say he always was, with 1997's vérité Welcome to Sarajevo as evidence--he's turned out, in the same span, In This World, The Road to Guantanamo, and now A Mighty Heart. This is the story of Mariane Pearl, widow of WALL STREET JOURNAL reporter Daniel Pearl, who was infamously beheaded while covering Al-Qaeda in Pakistan in the early days leading up to our current boondoggle. As that fan of Winterbottom's, I'm inclined to give the picture a benefit of a doubt I nevertheless wonder if it deserves. First run through my head, A Mighty Heart strikes me as pointless and unsurprising; Winterbottom is of course a better anthropologist than he is a political philosopher: if he's trying to apply Donald Symons's models of cultural evolution to ethics instead of more immediately compatible pursuits (music, or literature), then what's emerged from the experiment is the revelation that ethics and morality appear to have nothing to do with the base nature of man--and, moreover, that Angelina Jolie will never be Nicole Kidman in her ability to be both herself and someone else.

The encapsulating shot for me has Mariane (Jolie) walking down a Parisian street with poignant toddler in tow, holding a shopping bag with a baguette sticking out of it. By far, it's Winterbottom's most conventional image, one that I want to believe is the equivalent of the bas-relief "help me" raised on Regan McNeil's possessed belly in The Exorcist. (Substitute "Legion" for Jolie and Pearl and the demands of a high-profile production on the sensibilities of someone who, success or failure, has at least never been this boring.) There are moments as the Pakistani police go through their tortuous procedure, shaking down informants and bullying through human rights red tape to preserve their honour before a suddenly attentive world audience, where A Mighty Heart stutters towards a hum--but those moments are frustrated by the demands of the picture to be safe, somehow. (Or the strictures of the picture to, while respecting the facts of the situation and its nihilistic aftermath, mine a moment of triumph, no matter how Pyrrhic, from the whole sordid mess so as not to alienate whatever imaginary public is clamouring to see this film.) It occurs to me that A Mighty Heart has less to do with its purported goal of furthering the cause of freedom of the press than with furthering the prestige of a scenery-chewing actress without whom this tailor-made vehicle wouldn't exist. The irony and the tragedy of Angelina Jolie's activism is that she brings a lot of attention to her causes, but the attention is focused squarely on Jolie at all times.

It follows that the parts of the film that aren't about Mariane's vigil and lamentations lumber to life. Scenes of the Karachi nightlife bristle with Winterbottom's gift for DV-vérité, while the rough irony that the director of a docudrama on Guantanamo Bay would suture with a police force that incorporates corporeal punishment in the course of their investigation doesn't escape, I don't think, without a cocked eyebrow. Still, A Mighty Heart feels self-serving--a more honest-seeming World Trade Center with a hero who has nothing to do with the tragedy, and nothing to do with the tragedy's resolution. It's a victim's story that reminds of a brilliant quote from a brilliant ONION article in which a bystander exclaims, "Man, I wish I had the courage to be crippled like that." I'm not sure the film ever crosses the line into patronizing, but there's nothing to be gained from sitting through it: no lesson to be learned, no experience to be experienced, and precious little new of anything to enhance a story that almost everyone already knows. It leaves the viewer with the uncomfortable insight into itself that the reason we go to something like A Mighty Heart might be the same reason we go to a serial killer movie: to see how clever the heroes are in restoring order; to comfort ourselves that what happened to them didn't happen to us; and to see at the end just how much they're going to show. And yet, should A Mighty Heart pays for a few more Winterbottom films that aren't compromised in this way, perhaps the sacrifice will have been worth it. Originally puiblished: June 27, 2007.