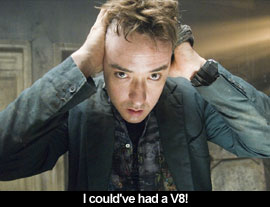 by Walter Chaw Boy, do I like John Cusack. He has scary, earnest intensity. No one does the nervous pit-pat like he does; no one else could have been Lloyd Dobler, or Martin Blank. Then there's The Sure Thing, Better Off Dead, Being John Malkovich, and hey, I liked The Ice Harvest (most of it, anyway). And boy, I guess Samuel L. Jackson is sometimes not terrible. The one scene he and Cusack have together in the prestige horror flick 1408 plays like seriomythic garbage-pop poetry: everything's good--the cadence, the words; what I'm saying is that I was well and truly on board with this dumbathon all the way up to the point where Jackson's hotel manager Olin (and as an aside, King has a special place in my heart for opening The Shining with "Officious little prick," referring to a different hotel manager) offers that the titular room in question isn't haunted, it's just an "evil fucking room." Cusack is haunted landmark guide writer Mike (the landmark guides aren't haunted, and neither is he, he documents haunted locations...never mind), not only a bit of a lush who looks like he's gained a few pounds on his liquid diet but a surfer, too, making this one of a sudden slew of films to deal with surfing (Surf's Up, Evan Almighty, Fantastic Four: Rise of the Silver Surfer) while providing 1408 (it adds up to "13," get it?) its Jacob's Ladder/"Occurrence at Owl Creek Bridge" escape clause. Yes, it's that kind of film--what kind of film did you think it was going to be?

Certainly not a good one, not with a recent Stephen King story--one that Eli Roth, of all arbiters of good judgment with a discerning eye for narrative, rejected--at its core and certainly not with a budget of over $20M, which almost always bodes ill for a project in a genre that demands a certain level of freedom. (If that number sounds relatively low, remember that the movie is about a guy in a hotel room.) No, 1408 is the same breed of horror movie as David Koepp's Secret Window: not scary; not fun; twisty in a completely linear way; micro-managed to a fine ground powder; a good reminder of how King used to be worth enough of a shit that someone like Stanley Kubrick wanted to adapt him instead of someone like Frank Darabont...again; but it looks great, and, wow, check out that cast. The director this time around is, perhaps predictably, non-native speaker Mikael Håfström, the dildo responsible for Derailed--proving that if there's one thing that's universal, it's the capacity to make schlocky garbage that's occasionally also reprehensible. Hurrah! 1408 isn't interesting enough to be reprehensible, though it tries hard; alas, it's so disinteresting that we mostly sit there wondering what about this project attracted people like Tony Shalhoub and John Cusack to it in the first place, though in all fairness Cusack did recently star in Must Love Dogs, so somebody needs a new agent. When I say that 1408 is trying hard to be offensive, I mean that eleven-year-old actress Jasmine Jessica Anthony, whose IMDb page proudly proclaims her a "strict vegetarian," is so Semetically cadaverous that even before her turn as Martin's dead daughter ends with her corpse exploding into ash, the Holocaust connection is impossible to ignore. Why there's a dead-daughter subplot in an evil fucking room flick in the first place is a product of overwriting and producer interference that demands the imposition of Dr. Phil-ologies on the unknowable quantity of true wickedness.

In King's defense, the original short story unfolds in a vacuum, which is exactly as it should be. There's no backstory for Elmira Gulch except that Auntie Em has wanted to tell her off for decades; villains don't need first acts. (Look no further than the failures of Episodes I, II, and III, Hannibal Rising, or another John Cusack starrer, Max.) 1408's evil fucking room's backstory is that 56 people have died in it, and during the course of our time in the room with Mike, we get to see a few of these casualties re-enact their death moments, projected like digital kinescope phantoms. Does this mean that when we die, we go lo-fi? Is the real horror here the Blair Witch-ian triumph of the primal over the technological? Olin does, at one point, warn that "electronics don't seem to work in 1408"--except that Mike's little tape recorder works fine (this after getting incinerated in a whiskey fire), as does his laptop computer after being soaked and frozen.

The horror of the room, then, must be the return of the repressed in the umpteenth rehash of King's "The Woman in the Room" drama, with Mike visiting the ghost of his father in an asylum bathroom and having a reunion with his dead little girl, the mother of whom he abandoned without a word a year previous. 1408 is the world's best, most aggressive therapist and the horror is pop psychology's Satan: Belial...I mean, denial. Ah, closer to the truth, I think, because the whole thing feels like a platitude, from repeated reverse POV shots up proverbial rabbit holes to Mike's snaking through dank crawl-spaces as he's pursued by a dead ringer for "Bone Machine"-era Tom Waits. (Why there are physical bogeys in the picture at all is more evidence of a concerted lack of imagination, since the evil fucking room shouldn't need help, the evil fucking room is an evil fucking genius.) The picture doesn't have the balls to live up to the challenges posed by its closed-room premise--it doesn't have the balls to make its evil fucking room evil or fucking (the room is a Freud-box), period, though it has the balls to pick on little girls and old men. So it's a bully; and like most bullies, if you push back, it folds up like a day lily. On the bright side, The Shining is still in print, while Kubrick's exceptional filmic translation of it is readily available for home viewing. Originally published: June 22, 2007.