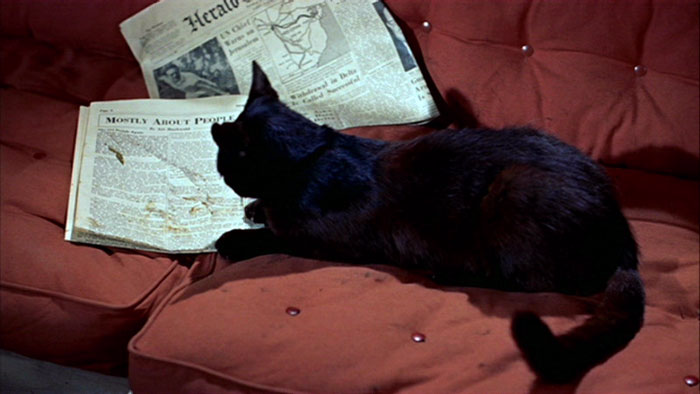 by Walter Chaw If Rear Window is Hitchcock's "testament" movie to that point in 1954 (post-North by Northwest, the term no longer has much meaning), then To Catch a Thief, appearing just a year later, recovers the only element missing from Hitchcock's black chest in Rear Window's exhausting exhumation: homosexuality. Note the way that Cary Grant's cat burglar John Robie is greeted by a former accomplice in scenic Nice: as Grant descends a staircase to an outdoor café run by all the reformed dregs of society once involved with Robie and now resentful that Robie appears to be back on the prowl, the head waiter pops a champagne cork in the first of several ejaculatory similes. I do wonder whether the entire film could in fact be read as a gay "reclamation"--its most famous sequence, the juxtaposition of the central seduction sequence with fireworks over Cannes, begins with Robie being teased for his asexuality, recalling an earlier flirtation with rival Danielle (Brigitte Auber) that ends with Robie asking her to cover her legs. More blatantly, Robie is approached by a muscle stud on the beach as Grace Kelly lounges in the background; and when offered on a picnic the choice between a "breast or a leg," Robie demurs, "You make the choice." Clever double entendres, no question, but what exactly is the second "understanding" that we come to in this series of innuendos? Moreover, what to make of the mother figure, reappearing at key erotic moments in body or direct reference (indeed, Kelly's Frances accuses Robie of thinking of her mother during their first kiss) and comprising the punchline of the picture as Frances threatens to make them a household of three (a literal "ménage a trios"--particularly given the film's setting). That kind of mother-love doesn't reach its apotheosis until Psycho five years hence, but there's something along the way to Hitch's complex Oedipal materphobia that suggests here a certain Freudian gay arrest.

To Catch a Thief may predict Psycho, but it predicts Vertigo more flamboyantly in its vertiginous rooftop pursuits, rescue (successful this time) of someone about to fall from one said rooftop, ambivalent romantic hero pulled from retirement, and "Midge"-type (Danielle, who, like Midge of Vertigo, assumes different identities as she morphs herself--unsuccessfully--from tomboy Girl Friday to sexual object choice). Though Vertigo never implies that Scottie's disinterest in Midge is because of his orientation, there is the suggestion in To Catch a Thief that something's not entirely "square" about this beautiful, well-dressed bachelor living alone in a well-appointed French villa. Consider, too, the play of jewels as aphrodisiacal totems for Robie--the entire prelude to the fireworks-seduction scene, lit brilliantly by the great Robert Burks, features Frances's face shrouded in shadow and her diamond necklace twinkling against her cleavage. To backtrack: Robie, an ex-jewel thief, is called out when a new rash of burglaries along the Riviera make him the target of police and the criminal underground's fury for the police's renewed interest in them. He hatches a plan with insurance agent Hughson (John Williams) to "case" potential victims, among them brassy nouveau riche socialite Jessie (Jessie Royce Landis) and her daughter Frances. That Robie's association with Frances is only through the deception and "wooing" of her mother hints again at that odd, Norman Bates-ian mommy-obsession; that Robie's association with the mother has mainly to do with her (sexualized) jewels leads logically to the "morning after" sequence in which Frances, having consummated her physical relationship with Robie, accuses him of stealing her mother's things during the carnal night. The idea--contemporary with this period's pop psychology craze--is that Robie is frozen at a pre-Oedipal stage prior to sexual maturity. Of all the films To Catch a Thief presages thematically, in its crime-as-catalyst-to-sexual-maturation bit, one can go so far as to find elements from 1967's Bonnie & Clyde.

Being ahead of its time, being creepy as hell in counterpoint to the cheery "vacation movie" atmosphere of it in the trademark Hitchcock way--even being, technically speaking, a near-perfect picture (take note of the numerous rack focuses during the fireworks scene, edited to give off a slightly disorienting, unpleasant feeling), however, doesn't make To Catch a Thief that great a film. Decidedly light, it feels tossed-off, an afterthought--every bit the lark Grant wanted his movies to seem. The entire film is the MacGuffin. Small wonder there's more interest in it extratextually: as the picture that brought Grant back from the brink of retirement; as the one with the stretch of road on which Grace Kelly was rumoured to die as Princess Grace of Monaco in three decades' time; not to mention as the last film Kelly would make before graduating from Hollywood to actual Royalty. Its only Oscar for Burks's cinematography, To Catch a Thief is a collection of VistaVision postcards; its location panoramas are breathtaking and its early helicopter camerawork manages to turn an endless car chase into a tedious walk in the park. Unusual for Hitchcock's later pictures, if usual for this mid-Fifties' tear (The Trouble With Harry, The Man Who Knew Too Much, and, I'm afraid, Rear Window), To Catch a Thief is really interested in looking at itself. Not a problem when the film is about looking (like Rear Window), but a problem when it's not. To Catch a Thief only means anything in the greater context of Hitchcock's twilight masterpieces.

THE DVD
Paramount reissues To Catch a Thief on DVD in a Special Collector's Edition sporting a 1.78:1 anamorphic widescreen presentation. While the image isn't exactly poised to impress, it's simply dazzling when judged against the previous disc's transfer. Moiré patterns are still an issue thanks to that damn striped shirt of Robie's, but the source print is cleaner and the colours are no longer so stale. In general, it looks like a newer film in this incarnation. Meanwhile, despite the addition of a 2.0 surround option, the Dolby Digital audio is as before: nothing special. Laurent Bouzereau and Peter Bogdanovich collaborate on a yakker that's condescending and self-aggrandizing in equal measure. Bogdanovich does his Hitchcock impression (and his Hawks impression, and his Grant impression), calls everyone by his or her first name, and points out when "Cary" laughs the most naturally. In-between, he recalls how charming Grant was and, as Bouzereau James Liptons him repeatedly, recounts set visits and other personal anecdotes that simultaneously demean the film as it unfolds and position Bogdanovich as the #1 asshole namedropper of the universe.

Three featurettes ported over from the original DVD begin with a retrospective making-of (16 mins.) that has granddaughter Mary Stone and daughter Pat Hitchcock painting an astonishingly rosy picture of the Master, which if nothing else says something good about how Hitch was with his family. I don't know that blood relatives are the best people to talk about someone's work--I don't even know that being that someone helps. Case in point: "An Appreciation" (7 mins.), in which Stone confesses she had grandpa ghost write a paper for a college Hitchcock course that received a "C." "I'm sorry, that's the best I could do," he told her. It's funny, but it's also telling in that just because you made it doesn't necessarily mean you have any idea of what you made. "Writing and Casting" (9 mins.) is self-explanatory, while a short piece on Edith Head (13 mins.) is another hagiography in what feels like a parade of hagiographies. At least they didn't ask Shyamalan to contribute. A theatrical trailer rounds out the presentation. Originally published: May 8, 2007.