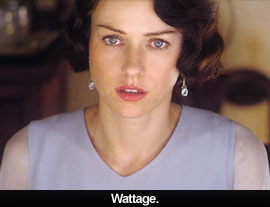 One of seemingly dozens of pretentious, self-produced vanity pieces from the Edward Norton grist mill, The Painted Veil, John Curran's adaptation of Somerset Maugham's story of colonial malaise, is a pleasant surprise. Naomi Watts and Toby Jones are fabulous (and Norton is steady); it's not terribly paternalistically racist despite being another Western film in which white people exert their magical influence in foreign lands; and even though it's all about prestige and hedonism, it manages now and again to actually be about prestige and hedonism. But like the simultaneously-opening Soderbergh noir The Good German, it's mostly interesting in the meta. What keeps this updating of the old Greta Garbo weeper from being literally better is the lack of immediacy in its tale of emotionally distant scientists and their flapper wives, adrift in the boiler pot of 1920s Shanghai. Not timeless in its remove but instead ineffably dated by it, it's an Old Hollywood production in both epic scale and lack of subtext, making the picture a lovely trifle not unlike other well-done bits of instantly-forgotten prestige (see: Philip Noyce's The Quiet American).

Walter Fane is a bland, emotionally distant research scientist specializing in infectious pathogens. "How fascinating," says socialite and object of Walter's affections, Kitty (Watts). "No, not really," Walter responds, yet Kitty marries Walter, anyway, moving to Shanghai following a whirlwind courtship largely meant to throw her mother's Jane Austen-tatious disapproval back in her face. (A mistake, safe to say.) Kitty finds respite from her subsequent boredom in the arms of diplomat Charlie (Liev Schreiber), an act of adultery the cuckolded Walter avenges by spiriting them away to a cholera outbreak in the middle of the country. Chinese legend Anthony Wong Chau-Sang has a juicy part as a military man who expresses that the troubles of his country are the responsibility of his countrymen and, in what's probably the film's most satisfying scene, demonstrates exactly how culturally specific are the problems that white imperialists like Walter try in vain to solve. Refreshing to say that this version restores Maugham's original ending (mangled in the Garbo), thus allowing for a final shot of the Chinese countryside that encompasses its vastness and beauty along with its essential mystery. In terms of how spoilers bleed, Curran's take has a lot more in common with Scott Smith's well-received penny dreadful The Ruins than with things like Edward Zwick's appalling Blood Diamond or Kevin MacDonald's similarly horrendous The Last King of Scotland. No matter the number of proofs given for silly Kitty's redemption, no matter the number of times it invokes a carpe diem worldview, The Painted Veil works thanks to its pessimistic belief that people can never carve out more than a moment or two of happiness for themselves in the middle of such a beautiful, insensible mess.

Robert De Niro's plodding The Good Shepherd is a different kind of insensible mess. The emotional centre of this semi-fictional account of the founding of the CIA (grounded by a stoic, monotone Matt Damon) hinges on another ill-conceived marriage (to another socialite, played this time by Angelina Jolie) infringed upon by the cloak-and-dagger of the newly-minted Cold War. There's some nice masculine bonding ritualized in the top-secret, homoerotic spanking/pissing/Greco-Roman wrestling of ultra-secret frat Skull & Bones (where Bush Jr. first learned to be a spook) that only occasionally elicits giggles, as well as snatches of interrogation and espionage that make The Good Shepherd a Bletchley Park presentation of a James Bond intrigue, i.e., a spy flick as filtered through the sort of secrecy and emotional reserve required by the profession itself.

Damon's spymaster Wilson is a cipher--made such, the film suggests, by the suicide of his stentorian father, which he witnessed firsthand. We get a boilerplate psychoanalysis of the toll his reticence takes on his life through a parade of treacherous father figures (a gay, Red teacher (Michael Gambon), an FBI man (Alec Baldwin), a military muckety-muck (De Niro)), women wronged (Jolie, a luminous Tammy Blanchard, Martina Gedeck), and finally a boy of his own (Eddie Redmayne in the film's best performance), whose pillow talk might undermine daddy's most important mission. It's the birth of a covert nation allegorized as the dissolution of a traditional family structure; there's no trick in discerning the message of the film as similar to that of Apocalypto (the fall of a great nation facilitated by corruption from within) and, in so doing, figuring out that beyond skewering the cult of masculinity in general and the Skull & Bones in particular lies The Good Shepherd's grand design of indicting the Bush administration's shameful legacy of illegal surveillance and dirty tricks abroad as the culprit behind America's global loss of face. Hardly a lightning bolt, and hardly one that deserves 160 deadening minutes of misdirection and repetition, and hardly anything to justify casting Jolie as the jilted wife of a disinterested husband.

Steven Soderbergh's The Good German is meant as a film set in the 1940s that looks as though it were released in the 1940s, too. Inasmuch as a self-consuming experiment can succeed, it succeeds, though proof of Soderbergh's ability to emulate Guy Maddin proves very little indeed. The Good German is ultimately a slack noir with an oft-beaten anti-hero Geismer (George Clooney), a hissing fatale in the Dietrich mold Lena (Cate Blanchett), and a pseudo-Lorre toad in army driver Tully (Tobey Maguire). It all amounts to not much as Geismer rekindles his wartime flame with turned-out Lena in post-war Berlin while Soderbergh builds a visually-arresting shrine to Weimar filmmakers and expats like Michael Curtiz.

A journalist who's seen more than he should, Geismer wanders around in a wide-eyed gape that skirts on the perilous edge of Clooney's O Brother Where Art Thou? moron performance. He's too smart to be this far behind, and all that's left for us to do during the downtime is contemplate how the picture is really about moral relativity in the post-war, pre-Cold War machinations of the Russians and Americans and their German scientist pawns. It wouldn't pass muster in the company of John Huston, Jacques Tourneur, or Jules Dassin; this is less Out of the Past than it is mired in the meta, its only import located in the furious exculpatory labours of critical admirers and, ironically, the one or two viewers still titillated by ugly words and brief flashes of sex, doggy-style. For as much as Soderbergh's Solaris was a wonderfully intimate update of Tarkovsky's canonical vision, The Good German attests that any act of critical mimic experimentation (Gus Van Sant's Psycho, for instance) requires the same core of human failure and desire, lest it come off as just so much masturbation and self-congratulation. Originally published: December 25, 2006.

THE DVD - THE PAINTED VEIL
by Bill Chambers Warner presents the third instalment of Edward Norton's 2006 Asshole Trilogy on DVD in a passable 2.43:1 anamorphic widescreen transfer. Aside from being a little overzealously matted, the image suffers from some of the worst colour bleed in recent memory, with the opening flash-forwards to a soggy field of blue leaves almost seeming out-of-register like some three-strip Technicolor movie from the '40s. If the telecine operators eventually get the saturation under control, a pervasive darkness never really lets up: Naomi Watts rarely glows like she does in production stills for the same film. The accompanying Dolby Digital 5.1 audio is strictly utilitarian, no doubt in accordance with artistic intentions. The Painted Veil's own trailer (16x9) rounds out the premiums while previews for For Your Consideration, The Astronaut Farmer, and Music and Lyrics (4x3, all) cue up on startup. Originally published: May 15, 2007.

THE DVD - THE GOOD GERMAN
by Bill Chambers Warner presents The Good German on DVD in a formidable fullscreen transfer. "Fullscreen?" you ask, incredulous. Well, yes--the 1.33:1 aspect ratio is part and parcel of the film's admittedly confused M.O., which makes Steven Soderbergh the first director to have framed a studio picture for Academy projection in decades. (Gus Van Sant's hardscrabble indies Elephant and Last Days don't count.) "Peter Andrews"'s b&w cinematography looks astonishing on the format, the anachronistically high-veering-on-hot latitude of many an image--think 1964's Dr. Strangelove--a result of the movie's pastiche aesthetic more than anything else; Soderbergh can't seem to decide if he's Michael Curtiz or Stuart Cooper. (On that note, no sense complaining about the decay of stock-footage inserts.) To cut to the chase: This thing would probably cause erections in HD. As for the film's soundtrack, it's rather dubiously rendered in 5.1 Dolby Digital, but I guess it qualifies as retro or old-fashioned in that there's very little dimension to the mix. (Fidelity is smashing, though.) Sadly, there's no commentary from the normally-garrulous Soderbergh--The Good German's theatrical trailer plus a startup block of previews for Infamous, Letters from Iwo Jima, Ocean's Thirteen, The Painted Veil, and American Pastime comprise the special features. Originally published: May 21, 2007.