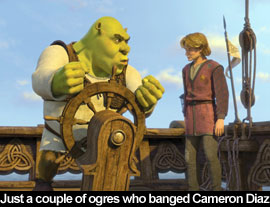 by Walter Chaw A bad franchise reaches its nadir as DreamWorks Animation's flat-awful Shrek the Third (hereafter Shrek 3) tackles the King Arthur mythos in eighty unwatchable minutes of thunderously boring and occasionally moralizing shit, puke, and hitting gags. The only thing mildly entertaining in the whole mess is a prolonged death scene for a frog followed by a chorus of the things singing a Wings song--entertaining, though not in any way inspired or satirical. As calling the movie dumb would constitute a recommendation for people actually interested in seeing it, better to call it the kind of life-suck where you can feel the irretrievable minutes siphoning out your eyes. To say that children would enjoy it is a smokescreen for the mentally-underdeveloped and emotionally immature to indulge in lowest-common-denominator slapstick and the type of hollow banter that passes for wit in great swaths of greater primate societies. All else fails and toss in a cover of Heart's "Barracuda" by that champion of women's rights and humps Fergie--paired in facile shorthand with a throwaway gag featuring one of the pantheon of fairy tale princesses burning her bra. (Describing it is already more funny and clever than the action itself is in the film.) Prescribing medieval Ever After revisionist feminism to something as essentially useless and inert as Shrek 3 is jarring to the point of total incoherence. If anything, this film is the prime example of what happens when the aim of crafting something for the express purpose of entertaining dullards, mental defectives, and toddlers results in something so middlebrow that it tends toward a vacuum. In its "defense," it's more likely to cause naps than to cause hyperactivity.

Tapped to be the next defender of the crown in the Rodeo Drive Kingdom of Far Far Away, ogre Shrek (dispiritedly voiced by the limited Mike Myers, again) confronts responsibility in a real job and a knocked-up wife, Fiona (Cameron Diaz, whose voice is not her best virtue). In order to avoid both, he goes off to Worcestershire High to abduct an alternative heir to the throne, young Arthur Pendragon (Justin Timberlake), dragging amusing ethnic subordinates Donkey (Eddie Murphy--have I said before "typecast as a badly-animated ass"?) and Puss-in-Boots (Antonio Banderas) along for the ride. Lots of "awww" moments as Shrek dreams of his potential litter of doe-eyed spawn and Donkey romps with his half-dragon litter: it's the sludge at the bottom of the sentiment barrel used as cement between the fall-down-go-boom action sequences and desperate attempts at updating old tales that clearly haven't actually been read by any of the participants. Consider that its top-billed screenwriting team of Peter S. Seaman and Jeffrey Price is the brain trust responsible for Ron Howard's How the Grinch Stole Christmas, Queen Latifah's Last Holiday remake, and Will Smith's legendary flop Wild Wild West, meaning they came cheap--meaning that every expense was spared in disinterring this prefab product in order to best maximize profit margins while reassuring corporate sponsors that nothing remotely stimulating will be lurking in here to potentially offend the consumer base.

Shrek 3 is merchandise, a film made by marketers--an investment in your gullibility and brand loyalty that also wants to hook your children on the exact same evil shit that atrophies your brain while anaesthetizing you to the pain of it. You might be looking for a diversion, but your children probably still hope that life isn't a tedious sty, and there's got to be better things for them to be doing than watching an animated baby ogre puke like a fire hose and a Mr. Bill-inspired Gingerbread Man crap frosting. It's easy for non-addicts to decry it; the real trick is recognizing that if you support artless cash grabs, you're directly responsible for a lot of what's wrong with this country. Far from an example of how lefty Hollywood is plotting the downfall of Western Civilization, it's an example of big business interests (Shrek's primary tie-in partner, McDonalds, isn't exactly a vegan bistro owned by pinko liberal hippies) fishing a hook into your wallet baited with cheap moralizing and sanctimony.

In addition to all the same falderal about appearances being only skin deep (this in a series that set the standard with a film too scared to let a babe marry an ogre while mercilessly mocking the short guy), Shrek 3 shoehorns in a brief high-school bullying vignette that rings awfully hollow when one considers that even cursory knowledge of the Arthur mythos instructs that Arthur's moment of unbecoming superiority herein is doomed to legendary heartbreak and betrayal. The message isn't a brace for the underdog, it's a biscuit tossed to the ruling elite--and further affirmation of this trilogy's championing of material rewards and status in return for monogamy, marrying your own kind, and reproducing in accordance with law and tradition. Frankly, it does a lot to dispel any notion that this slow-thinking golem is remotely irreverent or iconoclastic. If telling you that it's boring and stupid doesn't convince you, maybe telling you that it's also fascist and condescending will. Originally published: May 18, 2007.