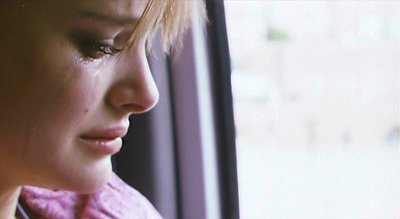 by Walter Chaw The not-at-all-hamfisted allegory of an Israeli woman and a Palestinian woman trekking across the disputed land to find an American who will settle some non-specific debt, Amos Gitai's tediously strident Free Zone opens with ten minutes, uninterrupted, of Natalie Portman weeping over what we discover to be the end of a love affair. It's showy and about as subtle as a kidney-punch--ditto the conception of Portman's passive Rebecca (Portman), the American on the sidelines, a matinee-beautiful beacon who stands by as impassively as Milton's God. That said, the device of a long, car-bound road trip narrated by flashbacks of the protagonists' separate journeys to this journey is, at least for a while, intoxicating. The problem--and it's a doozy--is that Gitai's picture is so blatant an allegory that nothing any of the characters say comes free of dramatic distance or irony, making it impossible to take the film seriously as anything other than ventriloquism for Gitai's, let's face it, unsurprising politics. Nothing wrong with Wailing Wall lamentations about the state of the world, but watching someone shake a fist at a dead horse, long past the hope of resurrection, for upwards of two hours, is tiring and futile. Is there traction in proposing that the film merely mirrors the hopelessness of the Middle East conflict? I guess, but then how many people--specifically, how many people renting a film called Free Zone directed by Amos Gitai--are going to feel edified by that?

Rebecca hitches a ride with accidental cabbie Hannah (Hana Laszlo), taken along for a casual tributary trip to, oh, I don't know, Jordan, to make Free Zone the first Israeli production ever to gain permission to film in a Muslim country. Hostile border guards, suspicious gas station attendants, and lots of wiper blades accompany them on their endless quest for self-discovery, offering along the way a thick, sloppily-bound manifesto penned by Gitai for the benefit of the world of gaffed idiots Gitai imagines will be moved by Yankee Rebecca marvelling at things she's "only read about." It's the distaff equivalent of Gunner Palace, where being there lends some imagined power to simple positions already held by most sentient creatures, many of whom are surely gifted with a good deal more eloquence and shame. When Palestinian businesswoman Leila (Hiam Abbass) enters the fray to complete the unholy trinity of Holy Land hijinks, Free Zone becomes largely unbearable--and so schematic that without much effort you can imagine the corkboard littered with index cards mapping out the political clashes this cast is asked to act out in their robotic interactions. For me, my palms started tingling with the "slappin' bug" around the tenth time Rebecca complained of her (allegorically) insatiable hunger. Oh, I get it: America is a colonialist asshole made moronic for its greed because the world it covets is a suppurating sty.

More gloom and righteous doom from the indie set as The Secret Life of Words trundles centre stage with its closed-room tale of horribly-burned oil rig wildcatter Josef (Tim Robbins), bedridden and in need of the tender ministrations of pallid nurse Hanna (Sarah Polley). Spanish auteur Isabel Coixet casts the picture in a gratifyingly icy glow--would that she'd been content with drilling the opaque mysteries of two badly-damaged human beings forging a tentative, human connection in the middle of a black drink. Alas Coixet, like Gitai, can't resist the meaningful political backstory that will transform her characters into symbols--that is, into ventriloquist dummies rattling off humdrum rhetoric. Not one person in their right mind would find any controversy in the vilification of the Armenian genocide, and hand-in-hand with that, I'd argue that the treatment of the subject should be respectfully circumspect in the manner of Michael Haneke instead of shrill in the manner of Atom Egoyan. Bad enough to reward patience with inadequate epiphanies, what The Secret Life of Words does is lull with a certain Breaking the Waves tonal ode before reducing itself to a Phoebe Cates-in-Gremlins denouement all of unearned shock and awkward pathos. A City Lights-esque epilogue wherein blasted Josef, freshly-sighted (take note!), proceeds to see his heavily-accented ladylove by digging into her past and forcing her, and us, to endure another abysmal lecture, chiefly reminds that while you think you might be safe renting a UK-financed film with an American star (and a Canuck one, admittedly) and a Spanish writer/director, Canadian movies can be made anywhere in the world.

THE DVDs
Via Warner, Canadian label Seville brings Free Zone home in a 1.83:1 anamorphic widescreen transfer that, thanks to the vagaries of PAL conversion, looks so crappy I was sort of amazed to learn the film wasn't actually shot with a consumer-grade digital camera. (It's indeed 35mm.) Disappointing that a region often described by Free Zone itself as seldom-filmed looks here like it was photographed through a windshield with a pointed lack of grace. The DD 5.1 audio is fulsome, however, with its channel separation consistent and logical, if absent of real fireworks. Light special features begin with an "Opening Scene Preparation" reel (11 mins.) that is essentially the rough footage of Portman working herself up to a crying jag from nothing with no commentary or context to justify the "preparation" portion of the title. It's really not a lot different from just watching the finished product. "Interviews" (12 mins.) is the usual thing featuring talking heads Laszlo, Portman, and Abbass going on and on about how amazing the whole experience of making the film was. Were that amazement only evident on screen.

Most un-shocking revelation? Abbas admits the ultimate idea of the film was "vague." She offers a lot of justification thereafter, but it's the first thought that rings true. (Abbass also confirms that Portman is a real live person.) For her part, Portman claims that it's an amazing time for Israeli cinema--meaning what, exactly? "Amos Gitai's Presentation at the Montpelier Film Festival" (9 mins.) is self-indulgent garbage that opens with a first-person track up the stairs to Gitai's lair, where the resident maestro is on the phone, listening to classical music, and noting, "The Continental"-like, the interloper. It's essentially nine minutes of watching Gitai talk to someone on the phone in French, which, even if you speak French, should rightfully make you want to punch a fist in his throat.

The Secret Life of Words arrives on DVD north of the border courtesy Mongrel Media's Festival Collection in a 1.85:1, 16x9-enhanced transfer that's artfully sharp and chilly. Colour separation is pure, blacks are black, and definition is good enough that you can almost see the veins on the other side of Polley's head through her translucent face. Especially by comparison, the Dolby 2.0 stereo sound is nothing special. Bonus features, scant, consist entirely of a list and short text descriptions of other titles in the Festival Collection series. I'd transcribe them, except there's no real point to the exercise; I will say, though, that for me, clicking on "more" after the first 32 titles results in my machine shutting down. For what it's worth. Originally published: May 4, 2007.