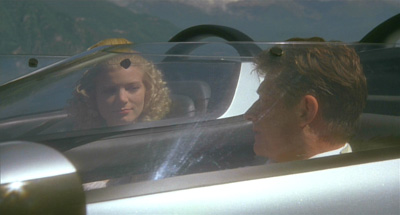 by Alex Jackson Dr. John Buchanan (John Hurt) is a brilliant scientist in New Los Angeles, circa 2031. One of his experiments fractures the space-time continuum, sucking him into nineteenth-century Geneva, where he meets Dr. Victor Frankenstein (Raul Julia), who's busy conducting a few experiments of his own. In the meantime, the Frankenstein maid is on trial for the murder of Victor's brother. Nobody knows how she did it, though they figure it's witchcraft. Because he read the book (Frankenstein, of course), Buchanan knows that Frankenstein's monster (Nick Brimble) is the true culprit. Frankenstein is refusing to admit to his failed experiment, however, and would rather allow this girl to die than confront his crimes against God. Exasperated, Buchanan goes to Mary Shelley (Bridget Fonda) for help. As for the monster, he's terrorizing Frankenstein and insisting that the scientist create him a female companion.

Despite having its basis in a novel by Brian Aldiss, Roger Corman's Frankenstein Unbound (hereafter Frankenstein Unbound) is among the more faithful adaptations of Shelley's classic (at least until the Branagh version in 1994). The monster is articulate and not altogether unintelligent; his hatred of Victor is born of existential angst and confusion. He never asked to be made and is particularly resentful of the fact that he's ugly, hence his demands for a mate. This aspect of the film is the most vulnerable to goofiness: Regardless of whether or not it's faithful to the original text, an articulate and sensitive Frankenstein's monster violates our mental image of the creature as fostered by the Universal model. Director/co-writer Roger Corman (he penned the screenplay with critic F.X. Feeney, whom you may remember recorded a commentary track for the Special Edition of The Towering Inferno) does little to soften the camp when he has the monster ask the village children if Victor "made them." The most successful adaptation of the novel's themes may actually be Ridley Scott's Blade Runner, which hadn't the challenge of addressing the baggage James Whale brought to the material, to say nothing of Mel Brooks.

In the film's best scene, Shelley opines to Buchanan that scientists must "live with the madness of possibility" and attacks Frankenstein's experiments as "an abomination in the eyes of God." This handily expunges the key conflict in Shelley's novel, a Romanticist critique on Enlightenment, and informs Buchanan's character arc. His entire belief system is upturned as he realizes he has more in common with Shelley than with Frankenstein. He absolutely idolizes the nineteen-year-old girl and considers her one of the great minds of the 19th century. When she tells him about how scientists must live with the madness of possibility, he replies that she amazes him. "You live in the nineteenth century and yet you understand the future infinitely better than I do." They kiss and laugh and fall to the bed. As Shelley unbuttons her blouse, she coos, "Percy and Byron preach free love. I practise it." This is the last we see of Mary Shelley, but the experience appears to revitalize Buchanan, who decides to definitively reject his scientific pursuits in favour of the mushy emotions inspired by this tryst with the literary giantess.

At the risk of stating the obvious, Roger Corman is, as the underrated critic Brandon Judell once said of John Singleton, a B-movie director with A-movie aspirations. Frankenstein Unbound may have been a better movie had it come out in the late-'50s or early-'60s as a black-and-white gothic starring the likes of Vincent Price and Boris Karloff. The film's kitschy high-concept clashes with the anaesthetic respectability of the medium-budget special effects and authentic European locations. I find it especially amusing that, in an apparent attempt to further class up the proceedings, Corman appropriated Hurt, Fonda, and composer Carl Davis fresh from Michael Caton-Jones's critically-acclaimed Scandal, for Corman clearly remains an exploitation producer first and a bona fide screen artist second. He seems to be more interested in getting asses in the seats than in generating a work of lasting value.

Frankenstein Unbound is not a bad movie, but it ain't that good, either. It's the kind of thing you might watch on Showtime to waste a lazy Sunday afternoon, were you to watch it at all. The film is missing something and I think that something is heart. Not to mention, when you have a relatively literate script and a cast that includes actors such as Hurt, Julia, and even Fonda (her outraged pout while exclaiming "It's an abomination in the eyes of God" successfully conveys Shelley's invigorating youthfulness), the whole "Roger Corman" thing just isn't quite as cute.

THE DVD
Fox has released Frankenstein Unbound on disc in a pretty solid bare-bones package. The 1.85:1 anamorphic widescreen transfer looks a bit too diffused throughout but is for the most part vibrant and well-defined. The Dolby Digital 2.0 Surround track is faithful to the film's modest aspirations and loud and impressive where it counts, i.e., when it comes to Davis's creepy score and Hurt's gravelly voiceover. An insert booklet containing production notes is the lone special feature. Originally published: May 14, 2007.