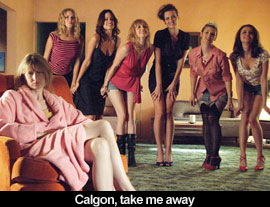 by Walter Chaw Nikki (Laura Dern) is an actress landing her dream role opposite Devon (Justin Theroux) in a film directed by the great Kingsley Stewart (Jeremy Irons). Alas the project, "On High in Blue Tomorrows", has a history in which a previous, doomed production ended as reality seeped into its fiction and the film's onscreen/offscreen lovers were killed. For a moment, it seems as though David Lynch's Inland Empire might be as straightforward as a haunted Hollywood genre exercise--but time slips, it's suddenly the next day, and as one character says to another, you're sitting over there. Displaced, distracted, the picture is a masterpiece that, for the patient, the active, and the curious, may be the most literal definition of "dread" captured on film. That feeling you get when Henry Spencer contemplates his feral baby in Eraserhead is the same species of disgusted, familiar fascination that infects this film like a murder of maggots.

Lynch's exploration of love, betrayal, and identity inundates Inland Empire with an ineffable, existential quagmire. It's glorious, defiantly individual, and an untidy mess of loosely-connected vignettes that manage to coalesce over the course of the film's three-hour runtime into something like an avant-garde telling of the myth of Eros and Psyche--the girl-child of the myth Nikki, fully-grown and in a profession that makes her as visible as the Psyche of the story (who earns the unwelcome attention of rival-in-beauty Aphrodite), confronting her sexual anxieties as they manifest in a potential affair with notorious lothario Devon. On the surface, it appears that Lynch is revisiting the Tinsel Town, notoriety-fuelled identity nightmare of Mulholland Drive, but, freed of the Persona dynamic of woman/woman (and of the Hitchcock dialectic of blonde/brunette), Inland Empire is grounded in the friction between two men: the bestial husband and the potential lover.

Like the interchangeable personae of Lynch's two women, the two men of Inland Empire are, if the Eros and Psyche read carries, likewise antipathetic aspects of the same character. They are the romantic and the horrific, perhaps something so simple as the emotional and the intellectual parts of what should in essence be interpreted as one functional archetype. To complete the transformation of full-grown woman into a child inexperienced in love, Lynch employs regression tropes like alienation, confusion, misunderstanding, and inconsequence. Take the circular Theater of the Absurd conversation of a family of bunnies on a stage, or the overlapping realities of the film-within-a-film (within-a-film), or the death scenes enacted before mental incompetents and social orphans; the ability of Lynch's films to discomfit can be drawn from this ability to winnow all the existential nightmare of being small into little pockets of forlorn isolation.

Inland Empire feels like a Charlie Kaufman movie at times as Nikki evolves through the indignities of childhood while coming to flower in a series of very public deflowerings: first on a ridiculous talk show (curiouser and curiouser, Dern's real-life mother Diane Ladd plays the host), then through the shooting of a cursed screenplay. Lynch seems conscious at least of establishing the premise as something timeless, with an off-the-reservation Polish gypsy woman (Grace Zabriskie) relating Nikki's story as an old folktale before revealing that the script Nikki's so pleased to be shooting had been attempted before with tragic results. Nothing new under the sun and all that, it follows that Eros and Psyche represent only one of multiple potential avenues for unlocking this text.

Allowing for that, Inland Empire jibes particularly well with the story of the young woman, Psyche, spirited away to a castle of shadows by a wind to be the bride of Eros, where her attendants are disembodied parts and where her continued existence is contingent on her agreement to not know her lover. Consider, too, that in the tale--one that is ostensibly employed to demonstrate the epic difficulty of bridging the divide between the head and the heart, the two aspects that the two men in Nikki's life could be said to represent--Psyche mortally transgresses and dooms herself to a series of impossible tasks to earn her way back into the sweet embrace of the bliss she enjoyed in ignorance. Like Psyche, Lynch provides Nikki with animal helpers of a sort--and to compound the complexity of any analysis of Lynch's films, at some point the idea that Lynch is in fact providing proverbial bread crumbs for his audience proves inescapable. Dreams are nonsense, too, until they're held up against the candle of archetype.

I don't think that Lynch is difficult; I think it's possible to regard Lynch's films fairly simply as directed at the collective unconscious, given that they're uniformly sticky and unpleasant despite rarely making conventional narrative sense. Clocking in at just under three hours, Inland Empire makes the case, by its gut-impact alone, that there's something huge and nameless roiling in its belly. For my part, I'd offer that the picture completes the loose trilogy begun by Lost Highway and Mulholland Drive: examinations each of identity and sexuality, as well as perception and the slipperiness of existence. If Lost Highway and Mulholland Drive are relatable as extrapolations of themes proposed by Hitchcock's Marnie and Vertigo, think of Inland Empire as Lynch's The Birds, wherein the indomitable femme is reduced to domesticity at the end not by any supernatural source, but by her agreement to be assimilated into the patriarchal norm. Writing about it is perhaps, to paraphrase Frank Zappa, like dancing about architecture, but Inland Empire is a fascinating, terrifying document of the machinations of the lizard brain and even the instinct to represent it in story and image--of how all the intricate steps in the waltz of love and jealousy (and art and expression) might just be the product of millennia of biological hardwiring. Originally published: April 27, 2007.