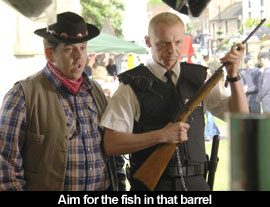 by Walter Chaw Edgar Wright, Simon Pegg, and Nick Frost return after the triumph of Shaun of the Dead with the nominal success of Hot Fuzz: the one a dead-on skewering of/homage to the zombie genre, the latter an equally-dead-on skewering of/homage to the buddy-cop genre that leads one to conclude that the zombie genre is infinitely more fulsome a target than the buddy-cop genre. Though it's clearly the product of smart guys who care about the films they lampoon, there's obviously a difference between making a movie that can stand proudly alongside George Romero's body of work and making one that could keep good company with Michael Bay's. (There's a lot of meat to be mined in a clever dissection of the zombie genre, in other words, whereas most action flicks of this type are already self-parodying exercises in excessive hetero-affirmation amidst much piece-fondling and weeping.) What works best about Hot Fuzz isn't its admirable respect for and similarly keen understanding of films like Robin Hardy's The Wicker Man and Richard Rush's fondly-remembered Freebie and the Bean, but that it, like Shaun of the Dead, functions remarkably well as an example of the genre--something of which most parodies (i.e. arbitrary garbage like Shrek) are completely incapable.

Gung ho Sergeant Nick Angel (Pegg) is a London super-Bobby exiled to a bucolic hamlet when his heroics begin to show up his peers--a possible reference to the fate of Sting's perfect soldier in Terry Gilliam's The Adventures of Baron Munchausen. (Hot Fuzz invites such speculation because Wright and company have copped to aping upwards of two hundred films in crafting this marathon tribute.) Once safely ensconced in the quiet, Lovecraftian confines of his new beat, Nicholas finds himself paired with oaf Butterman (Frost) and, in no time flat, at odds with the citizens of the small town, who find Nicholas' heightened paranoia a source of humour. Soon, however, a series of grisly "accidents" arouses Nicholas' Spidey sense and spurs him into action despite the continued skepticism of the village green. It's only a matter of time before sinister market-owner Skinner (Timothy Dalton) and a who's-who of UK character actors (Jim Broadbent, Paddy Considine, Billie Whitelaw, Paul Freeman, Edward Woodward, Bill Nighy, Kenneth Cranham, and so on) offer their moments as either suspicious allies or the usual suspects.

For my part, I missed the sense of real pathos the trio managed in Shaun of the Dead--even the new film's father/son dynamic seems played more for the gag Point Break connection than for any real emotion. Nevertheless, Hot Fuzz repeats the minor miracle of Shaun of the Dead: it's a super-intelligent picture that doesn't betray a superior attitude towards the almost-uniformly inferior mess of pictures it essays. It's the smartest kid in class, but it's not uppity about it. The greatest pity might be its advertising campaign, which misleads about the amount and type of action contained in its body while giving away some of the picture's best, and most patient, Went the Day Well? surprises. Surprisingly gory in a horror-movie fashion and chock-a-block with more grotesques than a Southern Gothic, Hot Fuzz takes its time getting to where it's going--it's a carefully-written, meticulously-planned piece that ties up all of its set-ups with clever knots, saving the majority of its action for the last half of its full two hours. Its niftiest trick may be that it somehow captures what it is about something like Bad Boys II that so intoxicates without stooping to explain or becoming appalling in the imitation. Easier said than done, the picture is a fantastic, spot-on shrine to films that don't deserve it and, like a more carefree Tarantino, obviously the product of guys intoxicated by the strange wine of B-cinema. Originally published: April 20, 2007.