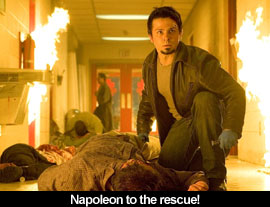 by Walter Chaw Robert Rodriguez is better at making an old exploitation movie and Quentin Tarantino is better at capturing the joy of watching old exploitation movies, meaning that the Rodriguez half of Grindhouse is exuberant, post-modern camp and the Tarantino half is, as Tarantino's films usually are, pure delight. Rodriguez winks and tries maybe too hard; Tarantino, being the sui generis of a very specific kind of film, proceeds to create something that resembles Vanishing Point and Two-Lane Blacktop while steering clear of irony, self-indulgence, and post-modernism in its reverence. The mistake is in seeing some of Tarantino's casting choices as ironic: what's wrong with the careers of the world's Travoltas and Pam Griers and even De Niros is that they started cashing in on the ironic value of their brand. No, what Tarantino does is remember why they became a brand in the first place. A moment where Kurt Russell, as Tarantino's bogey Stuntman Mike, flashes a giant, shit-eating grin right through the fourth wall doesn't come off as self-congratulatory so much as it shows an old genre vet excited to be back in the saddle. While Rodriguez's Planet Terror is fun in a back-clapping way, Tarantino's Death Proof is a profound insight into the sort of dick-raising entertainments that made Tarantino who he is as fanboy artist. Rodriguez likes to show off--Tarantino can only make the movies he makes: it's not the pulpiness of the subject matter that feels like the true faith in Tarantino's films, it's the sense that for all the artificiality of his aesthetic, there's not an ounce of pretense in his decisions. In short, Rodriguez is the Salieri to Tarantino's Mozart.

Accordingly, Planet Terror hits all the right notes--the secret military bases, green gases, strippers, rednecks, BBQ, splatter, the casting of C-list icons like Tom Savini and Jeff Fahey and Michael Biehn, the fitting of go-go dancer Cherry (Rose McGowan) with a prosthetic machine gun, and so on--without ever suggesting that Rodriguez hears the music. His appreciation of the grindhouse pictures informing the project feels MST3K-ish to me: if it's less hostile, that's mainly because he's not smart enough to know that his admiration doesn't have much to do with respect and the drive for defiant individuality that an affection for these pictures can represent. (It's telling to me that his best film is Sin City, as there's very little of him in it.) Planet Terror's central gross-out joke involving freshly de-sacked testicles says everything one can say; Rodriguez parades a lot of balls, Tarantino needs not resort to any such compensatory measure. Soon, zombie-like throngs bubble up here and again (the film is more second-tier Romero, à la The Crazies), leading to the expenditure of a few thousand overripe squibs as mysterious stranger Wray (Freddy Rodriguez, no relation) reunites with bombshell Cherry and leads humanity's last, best defense against the diseased Hun.

Neither more nor less than that, Planet Terror is about how silly and badly-made were those old zombie/military terror flicks, punctuated by snickering asides and wet indulgences in Greg Nicotero's F/X work. Though it's never boring, the best thing about Planet Terror is the Rodriguez-helmed trailer that precedes it, for a fictional Danny Trejo vehicle called Machete. Essentially Shooter with the tagline "They fucked with the wrong Mexican," it says in three minutes more about the function of exploitation pictures on the fringe for fringe audiences (minorities, women, dorky white guys working in independent video stores) than does the whole of Planet Terror. The main feature is such a glittering piffle that a moment where a child accidentally caps himself with mommy's gun isn't remotely as funny as its placement and tenor might imply. Rather, it's unpleasant in the way of the blowhard who finally feeds out enough cocktail party rope with which to hang himself. At the bottom, once the dust settles, the only thing exploited in Planet Terror is exploitation films, which, of course, handily alienates the very audience assembled for three hours of Grindhouse.

Three faux-trailers provide the cushion bridging Planet Terror and Death Proof, the best being Edgar Wright's Don't and the worst probably Rob Zombie's tribute to the Ilsa: She Wolf of the SS series, which isn't bad so much as predictable (save a cameo from the perfect actor to reprise Fu Manchu) in a Blades of Glory fashion. (Is it actually possible to parody Ilsa flicks?) Eli Roth's Thanksgiving is graceless, but its gleefully-depraved closing shot forgives the rest--even the turkey mascot running around with its head cut off.

Death Proof is two long dialogue scenes alternated with two virtuoso action sequences. Stuntman Mike, pompadour'd with a long scar decorating the left side of his face, drives a car he's "death proofed": reinforced for stunt work to the point that almost no auto-related calamity could claim the life of its driver. It's a contention Stuntman Mike tests on a dark Texas highway, and Tarantino shows it three times in as many different angles with the fate of one passenger, her eyes closing as though anticipating a new lover's first kiss, rendered almost unbearable for the tenderness of its expectation. Since his affinity with the rhythms of pop chatter are no longer a surprise, what stuns are these small moments of romance in Death Proof--reminders that Jackie Brown may be the most underestimated love story of the Nineties that likewise demonstrate a remarkable insight into the gender dynamics of slasher and exploitation pictures. Most of the second half has to do with the difference between love and lust, for instance, as well as the way that an appreciation for genre films often falls out along similar feminine/masculine lines. (That there's a "couples" designation for porn paints the distinction perhaps most sharply.) The tango between Stuntman Mike's juiced-up black Charger and the white, Vanishing Point Dodge Challenger of his quarry (which includes the incomparable stuntwoman Zoe Bell) plays out like the rape/revenge foundation for countless exploitation flicks in the vocabulary of film-familiar backroads, with muscle cars the ram and receptacle. Its conclusion an ejaculation of complicated genre reversals and confirmations, Death Proof is a film about courtship, untimely intoxication, bad decisions, and testosterone as a literal elixir taken like a shot of Jaeger when you need to seal a deal.

Death Proof is so sticky that Stuntman Mike's recitation of the last few lines of Robert Frost's "Stopping By Woods on a Snowy Evening" lingers long after all those exploding zombie pustules have faded. Russell's resurrection as a B-movie icon is complete, just as Rose McGowan's elevation into an action heroine proves to be a non-starter. (It's revealing that Tarantino casts McGowan in his picture as a victim.) Grindhouse confirms that Tarantino knows exactly what fuels the tingle when an entire generation of us sees Russell stroll on screen with nihilism in his eye--and that Rodriguez, who casts Savini in the same role in which he's always cast (that is, as the eventual victim of his own splatter effects), is only really good at puerile imitation. Planet Terror's not nearly as smart as it thinks it is; Death Proof's smarts are so edged and complicated that they could only be the product, unintentional, of an auteur who's assimilated the undertow of his favourite films and, rarest of the rare, is able to reproduce those undertows in works that, however familiar, are completely original. The problem with Tarantino imitators (at this point, you have to think of Rodriguez as the worst of them) is that there are precious few filmmakers who've so successfully made films that speak to the collective unconscious that are also deeply personal and conventionally entertaining. And the problem with Tarantino detractors is that they simply don't like movies enough to consider that Dirty Mary Crazy Larry is possibly a more influential good-ol'-boy on the run picture than Badlands--and won't until it, like Dennis Muren's Equinox ...A Journey Into the Supernatural, gets a Criterion DVD release. Too bad Tarantino didn't do the zombie pic, too. Originally published: April 6, 2007.