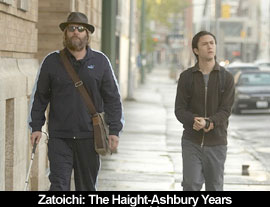 by Walter Chaw Perfectly workmanlike in execution, Scott Frank's hyphenate debut The Lookout is a mash of admirable capers (A Simple Plan, Memento, and Fargo are high in its pantheon of giants' shoulders), but it lacks suture in its crime arc, making one wish that its small character moments--highlighted by a superlative cast--were allowed to anchor its climax and epilogue. As Chris Pratt, a brain-damaged youth suffering after an act of high school chutzpah that resulted in the annihilation of his golden life, Joseph Gordon-Levitt continues to cement his claim as the best young actor of his generation, delivering a performance revolving around the life and death of the mind that is heartbreaking in its observation and subtlety. I think a lot about a moment near the end of the film where he makes change for an old acquaintance and lament that the twenty minutes or so that precede its conclusion--twenty minutes that drag The Lookout into convention and cheap formula--even happened. Until then, the picture drags some seriously dark shit out from under the psychic bed, such as how being a sports hero in high school can hide the fact that you're maybe an asshole setting yourself up for a fall, and how robbing anyone of virility and self-esteem (not to mention Everybody's All-American) can lead to dangerous explosions involving women and long firearms. Once exposed to this genre's sputtering arc light, however, all that darkness in The Lookout is suddenly at the mercy of a lot of travel-worn underdog revenge bullshit. The tightrope of genre pictures is that the first time I can predict what's going to happen is usually when it loses me for good.

Pratt lives with blind, former meth-addict Lewis. As played by Jeff Daniels, he's a decent, non-exploitive, "fuck off" portrait of disability--not noble in any way, just broken by disappointment and missed opportunity like every other asshole in the world. ("I've been turned down more than a motel bed," he says.) Pratt's frontal lobe injury manifests in the occasional outburst and, though slightly assuaged by a little journal, an inability to sequence events from beginning to end. In Daniels and Gordon-Levitt's early scenes together, there's a palpable feeling of veracity; I believed in the way these two characters functioned together--enough so that when the wheels begin to come off their relationship at the attentions of femme fatale Luvlee (Isla Fisher) and gravel-spitting villain Gary (an exceptional Matthew Goode), The Lookout gathers a potent head of melancholy steam. More's the pity, then, that the picture abandons the potential to be a little film about lost lives and frustrated ambitions in order to indulge little tingles leaking through giant, suppurating plot holes that would otherwise have been forgiven. Imagine A Simple Plan ending with the Billy Bob Thornton character revealing himself to be a Green Beret and taking out all his anger on the baddies, or Fargo closing on Margie turning into Annie Oakley.

Without more in its head, The Lookout is left as a competent heist flick and little more. It reminds me a little of Peter Medak's Romeo is Bleeding or another Billy Bob Thornton starrer, The Ice Harvest: pictures of this particular genre that are just good enough to feel like squandered potential. Indeed, moments like Pratt trying to find a can opener or telling his father that he can't play chess anymore, or Goode's baddie reaching for his inhaler, are so good that the fact that The Lookout's not better than "pretty good" may qualify it as the first real disappointment of the year. (The biggest surprise might be that, given early raves by Richard Roeper and Peter Travers (two of the four horsemen most responsible for the death of film criticism as a viable profession in the United States), The Lookout is actually still "pretty good.") I'd lobby that for all its desire to be accepted into the popular artery, it's worth a look as an early example of Gordon-Levitt's inevitable ascension onto the A-list, should he so desire: one of the first steps into a career like Johnny Depp's, full of quirky and personal pieces and often argument enough, by his presence, to see a movie. The Lookout is flawed for sure, but there's reason to believe its ultimate worth will be as a piece of a larger puzzle in Gordon-Levitt's career, destined to be examined with more intensity whenever he finally finds himself reborn in the public eye as something more than a former child sitcom star. Originally published: March 30, 2007.