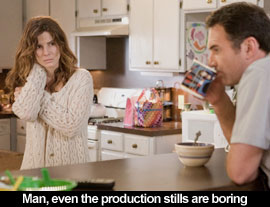 by Walter Chaw There's a scene in the middle of Mennan Yapo's thunderously bad Premonition where two little moppets do a little "Who Killed Cock Robin?" hopscotch that is meant, I think, to mirror their mother's tripping back and forth through time to before and after her husband's timely/untimely death. See? I get it. Premonition, with its faux-spiritual, quasi-pretentious, Hallmark Hall of Fame-enshrined machinations, not only thinks pretty highly of itself in its Lake House fashion, but also corroborates a whole new genre behind the ample wake generated by newly-solemn Sandra Bullock involving fractured narratives (see also: Crash), often time travel (The Lake House), and pat morals having to do--like the ironic moral to another time travel fable--with being excellent to one another. Not even the sight of a severed head rolling around at a funeral or Peter Stormare as the voice of reason lends the picture the slightest flicker of life. It's less damning than Bullock's primary career as the poor man's Julia Roberts in vaguely misogynistic romantic comedies, I suppose, though the best that could be said about Bullock's dreary new path is that while the films are still appallingly bad, at least they're not especially popular. This predilection for knocking off Nicholas Sparks master plots should be a short-lived one.

Before this dimwitted bullshit goes the way of the dodo, however, here's moony hausfrau Linda (Bullock) receiving the news that her non-descript, Peter Gallagher-browed husband Jim (Julian McMahon) has died in a freak car accident--then sleeping, then waking up to find that it hasn't happened yet, then sleeping again, then waking to find that it has. Checklist: The Other Woman (Amber Valletta, who, let's face it, looks an awful lot like Rutger Hauer); a Catholic priest who happens to have a dog-eared volume documenting historical whackjob Cassandras just like Linda; a little girl crashing through a blood-stained plate glass door; a mysterious answering machine message; and a meaningful murder of crows always at the ready to announce that something mystical, nay, autumnal is about to happen. Premonition is less shiver-inducing than it is supernaturally boring (it practically defines "interminable"); if you spend any time trying to puzzle out who knows what, when, and why, you're missing the bigger picture that the film is made by either the greedy or the genuinely stupid (most probably both). It's slickly patronizing, giving you nothing and then tickling at you for that cheap tingle--the uncle who hands you a stuffed bunny after he molests you. Once it's fumbled around in the dark for a couple of dry, fruitless hours, Premonition wraps up with a wholly unjustifiable epilogue so cynical in its grab for alien sentimentality that you could argue that the entire boondoggle is some kind of satire of Ron Howard movies.

Alas, Premonition is simply itself in all its instant camp classic, exploitation glory (more items for the checklist: mangled kids; miracle pregnancy; black best friend; swarm of flies; Bullock in loony-bin restraints)--or it would be if it weren't such a slog to make it through to the end. Those hardy enough to last will be gifted with one of the funniest unintentional murder sequences in the brief history of such things, perhaps the definitive modern example of what happens when someone with zero grasp of delicacy and delightful temporal conundrums tries to wrap things up with a bang after demonstrating near-total incompetence for the rest of the film. (How is it that no one called "shenanigans" at any point during this catastrophe? Was there a Shyamalan clause in their contracts that prevented them from punching holes in its cheesecloth fabric?) Ultimately, you could declare with some confidence that Bill Kelly's script is maudlin nonsense, but that would be ignoring the bigger question of how something that needs an intense rewrite just to iron out its internal inconsistencies attracted an alleged A-list star and a major production/distribution deal.

The answer, one supposes, is the question. With Adam Shankman--the genius behind Cheaper by the Dozen 2 and The Pacifier--attached as a producer, Premonition betrays itself as one of those intensely depressing examples of bad art erupting from the collision of filthy lucre and a complete lack of shame. I like that they use crows, because the stink of this carrion has flushed out a few guilty jackdaws. There's no crime in failing to make a good film (good films are rare)--no, the crime here is that this project was obviously doomed from the start and no one had the integrity or the impetus (or the ability?) to stem it before it hemorrhaged. Linda asks at one point whether it's a capital offense if she knows that her husband is going to die but does nothing to stop it. The same could be asked of Premonition's creative team and this pathetic, misshapen creation they expect you to parcel out your life and money to see. Originally published: March 16, 2007.