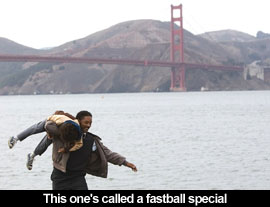 by Walter Chaw They should pass out insulin plungers with the purchase of a ticket to the new Will Smith vehicle The Pursuit of Happyness, which sports a subtle tickle of plantation politics that's overwhelmed by a sense of smug entitlement and ugly elitism. Inspired by the true story of Eighties Wall Street bootstrap wizard Chris Gardner, it's a telling in a way of the Hercules legend, complete with insurmountable, fickle tasks and divine inheritance. Our mythological hero solves the Rubik's Cube in the back of a taxi for the bemused delight of potential employer Jay Twistle (Brian Howe); deals with the abandonment of his frustrated wife (Thandie Newton); and figures out a way to retrieve a pair of the bone-density scanners (the sale of which were his profession pre-Dean Witter) stolen by the homeless peers he disdains. It's true: the picture--even with its ghetto-cred misspelled title and restroom-to-boardroom fable--is intolerant of people consigned to the impoverishment the film contorts to assure us will be Chris' plight for only the time it takes his uplift to ripen.

Although the story wants you to believe that it's about hard work, it spends more time establishing Chris as a Beautiful Mind savant who could "go through a math book in a week" when he was a precocious kid yet didn't, we fill in the blanks, have the privilege of college because of his background and maybe the colour of his skin. I don't mind the message that it's only hard work in combination with natural ability that leads to success, but what of the boardroom scenes in which a panel of old white men deciding Chris's future at the brokerage (a doddering James Karen the worst caricature among them) speak to him as though he were a child, stopping just short of patting him on the head and sending him back to the cotton fields? It's hard to know if The Pursuit of Happyness has gauged the complexity of its racism, much less the extent to which it's a satire of how blacks view whites (all of Chris's pre-trader clients are white doctors; almost all of his clients post-trader are white executives) and of how whites view blacks (i.e., as sometimes-precocious children). I did, however, marvel that the two transients who steal Chris's precious devices are white: no black-on-black crime here--The Pursuit of Happyness is as clear-cut a case of Man-phobia as a film that also wants to eat its cake can be. (A bit where Chris bluffs his way into a 49ers game and then proceeds to shuffle and charm his way into a pocketful of business cards strikes that same discordant chord with gusto.) In the picture's most troubling irony, much of its delighted whimsy (to which we're cued by self-deprecating Maya Angelouvian voice-over) is predicated on Chris's entertaining ability to bounce back from a series of perverse, Job-like setbacks.

If we're honest, the only reason Chris isn't a villain is that we know the outcome. His wife is angry because her husband appears unwilling to get a job that actually pays a salary so she can stop working double-shifts at an industrial laundry, pay the rent and utilities, and keep their child in daycare--what a bitch! The Pursuit of Happyness is great for the minute or two it talks about how hard it sometimes is to come up with the pennies for a hot meal for your family in a single-income household--the rest of it's just such glad-handing garbage. The trailer-friendly tableau of father and son (real-life Smith-spawn Jaden), sleeping in subway can with Smith squeezing out the Denzel Washington-in-Glory Teardrop of Oscar Gold is the perfect counterpoint to its parade of Stevie Wonder and Ray Charles anthems and is, again, so affected as to be a single-panel political cartoon. The final equation of The Pursuit of Happyness is that happiness is a job that can support your family, no matter what indignity one suffers in its pursuit and execution--a message that should bring tears to the eyes of The Man everywhere. What I left with is this idea that the three men positioned as Chris's superiors (after Chris goes through his unpaid internship as a boiler-room cold-caller) are each, in turn, shown to be officious, condescending, and racist, leading one to justifiably wonder whether the real message of the film isn't that smart, hard-working minorities should shut up and be grateful for whatever scraps the gentry deigns to toss out. Way to get your mind right, Will. Originally published: December 13, 2006.