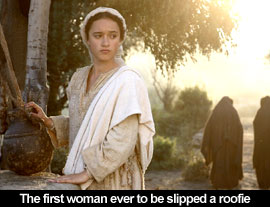 by Walter Chaw The nativity, consigned primarily in my imagination to bad children's pageants and gaudy lawn displays, gets a third image in my own private trinity with Catherine Hardwicke's The Nativity Story: a thunderously boring film so circumscribed in scope and crippled in execution that it's destined to be a minor hit fuelled by the line of buses stretching from your local bible chapel. It's another teen melodrama from Hardwicke, complete with disapproving adults and pregnant little girls batting doe-eyes at rough-and-tumble shepherds; you see Hardwicke occasionally attempting an anachronistic Fast Times at Golan Heights à la Sofia Coppola's Marie Antoinette, but Coppola, for all her dips into self-pity, is a filmmaker of note, while Hardwicke is just beating someone else's drum on someone else's dime. (Proof positive is that despite the uniformity of Hardwicke's output across three identically-non-descript flicks, there is still no sense that decisions are being made, or that anything more than a sickly colony from a thin scrape across the John Hughes petri dish has been born.) Mary is played by young Maori actress Keisha Castle-Hughes--her race of note because if there's something important about the instantly forgotten pic, it's that its cast is comprised of people who look like people might have looked in Nazareth around two thousand years ago and not like Andy Gibb. A shame that Castle-Hughes is dreadful (and not helped a bit by another dreadful, pop-eyed screenplay courtesy Mike Rich of Radio and Finding Forrester fame) and that Oscar Isaac (as Joseph)--who is not dreadful--is trapped in this prosaic sinkhole. Tempting to use terms like "sanctimonious" and "smug," but The Nativity Story is more accurately dissected with the observation that it's a faithful telling of a story that has as its only purpose the drumming up of ecstatic anticipation for a foregone conclusion.

It's absolutely game to call Thom Fitzgerald's films sanctimonious and smug, however, and 3 Needles is their self-important messiah. Three parallel tales of Third World woe, each of them infected with a secret, unnamed viral ailment (it's AIDS, stupid), the non-stunning film offers as its most non-stunning revelation that Fitzgerald equates his native Canada with Africa and China, though it doesn't play as self-deprecating so much as it plays as evidence that Fitzgerald has levitated himself above the plight of not only the "little people" of the rest of the world, but of his homeland and beyond as well. The struggle of 3 Needles isn't between man and ignorance, it's between Fitzgerald-as-Saviour and everyone else. The Great White North segment (which he calls, tongue poking through cheek, "The Passion of the Christ") involves a porn star (Shawn Ashmore) who uses his father's blood as his own during mandatory disease screenings while passing the love bug around like a bad penny. No rape in this one, but gang rape is the loathsome catalyst (rather, the only catalyst loathsome enough for this filmmaker) of the other two: one with Lucy Liu as a dedicated government worker inadvertently decimating an entire Chinese village before giving allegorical birth alone by the side of a dusty road; the other with Chloë Sevigny as a Catholic missionary in South Africa, selling her body for a few precious capsules of a miracle pharmaceutical.

It's a nasty, misanthropic film, the only kind someone with a dangerously misguided and inflated sense of self can produce--yet what really nails 3 Needles to its cross is the hollowness of its constant, deadening, non-illuminating moralizing. (I'd love a peek at the keyboard Fitzgerald uses to conjure his screeds: I've never seen one sledgehammered into dust and splinters before.) Olympia Dukakis provides grandmotherly narration, reminding us that these three stories are but three out of ninety-million--and when it all wraps up, the picture reminds of that guy at the cocktail party who gathers a crowd for his passion only to gradually lose it with his arrogance. Without criticizing the AIDS epidemic or, even, the importance of a film on the topic, what most rubs about 3 Needles is the same thing that offends about similarly self-important message flicks like Fast Food Nation (and, hell, Crash and Babel): that no amount of crouching behind the major issues of our day can hide a general lack of insight and eloquence. One would think that films like 3 Needles would make you care, but generally they just make you angry about being spoken to as though you were an idiot in need of all the wisdom an Emilio Estevez or a Thom Fitzgerald is able to impart. Praised in some circles for providing no real answers, 3 Needles merely substitutes thoughtful ambiguity with hand-smacking and lumpish metaphors. For those keeping a tally, other things Fitzgerald's film shares with The Nativity Story include nice scenery and an overpowering score. Originally published: December 1, 2006.