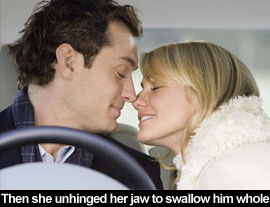 by Walter Chaw There are bad movies, and then there are Nancy Meyers movies (first What Women Want, followed by the similarly excrescent Something's Gotta Give): chick flicks in the most damning, insulting sense of the patronizing term and reason enough to question the wisdom of ever spending money to see a movie. If you go to Meyers's latest, not only are you about to watch what is easily the worst movie of the year--you're most likely going to do it in the company of people who'll actually like it. The Holiday is appallingly written and icky besides in that familiar way of this brand of Love Actually/The Family Stone yuletide romantic refuse, casting Cameron Diaz and Jude Law as lovers fucking away the hours inside a Thomas Kincaid painting while Diaz's frumpy house-swap buddy, played by Kate Winslet, finds meaning in Santa Monica by propping up a fossil (Eli Wallach) and falling for a James Horner-esque composer of horrible soundtracks (Jack Black). Parliament on the Thames is featured as prominently as the Pacific Coast Highway to underscore either how vacuous the filmmakers are or how stupid they think the audience is while Hans Zimmer's soul-sucking, teddy bears-humping score saps away the last hints of credibility anyone has after participating in this gingerbread death march. If the opening voiceover narration by Winslet's lovelorn Iris isn't warning enough, consider that the narrative crutch used by Diaz's emetic movie trailer-editor Amanda is a series of fake movie trailers about Amanda's romantic imbroglios.

See, high-maintenance Barbie bitch Amanda meets her match in a man who seems a lothario but, wait for it, is in fact a loving family man with a pair of doe-eyed moppets Meyers uses in exactly the same way she does a little dog. (The real magic of Diaz's performance is that if you close your eyes, you can distinguish her from neither the whining of the dog nor the keening of the toddlers.) Seeking escape in the aftermath of a break-up with her good-for-nothing boy-chick (Edward Burns, of course), she heads to Google™ on her VAIO™ laptop and, like all retarded people do in retarded movies like this, proceeds to recite aloud everything she does and everything she reads. Meanwhile, her counterpart across the pond, Iris (Winslet), fed up with pining for her evil boss (Rufus Sewell--reaching his nadir at last as the British Edward Burns), agrees to exchange domiciles on the principle that exhausted, derivative crap such as The Holiday will appear less so with an infantile high concept. Jack Black (50% eyebrows, 50% gut) makes for the worst kind of love interest in that he's both physically unattractive and obnoxious, even turned down to a low simmer as he is here. That said, a scene in Blockbuster™ where he does his Tenacious D™ shtick to movie themes is, by that time, no more upsetting than a dinner party of the damned that accidentally recalls the card game from Sunset Blvd., an entire subplot that has dinosaur-Jew Tuesdays with Morrie pathos scrawled all over it, and a two-second cameo by the once-promising Jena Malone as some girl her Cold Mountain co-star Jude Law is about to screw.

Between the constant product placement, the incessant telephone/Blackberry communications, the recurring glimpses of Jonathan Franzen's The Corrections (bizarre in and of itself but especially in a film full of illiterates), and an extended bit where Black's movie score aficionado doesn't know that "Arthur's Theme" was already composed by Christopher Cross for what is quite possibly the prototype for this kind of bullshit, The Holiday manages to be somehow worse than an Ephron sisters movie in that a fake trailer seen herein for a fake movie starring Lindsay Lohan and James Franco is something I felt I'd rather be sitting through. It's made by people so dumb they really think that references to The Lady Eve and His Girl Friday will augment their project for its imaginary "discriminating" audience (let me break this to you gently: no one who respects film is voluntarily viewing The Holiday) while simultaneously mystifying the "broader" audience with a depth of movie knowledge. Even giving it the benefit of the doubt, The Holiday is the product of condescending census-takers who have dedicatedly watered down their script in order to avoid offending the people they hope will naturally be drawn to jellied tripe like this. It manufactures uplift it doesn't deserve for inhuman ciphers shoehorned into situations so unlikely that any sad souls who identify with the "ugly" one and empathize with the "pretty" one (and you should've flipped the casting of Winslet and Diaz there, Meyers) will have a brief, nasty reality check. In a year already sparse in terms of great films, credit The Holiday for at least upholding the annual tradition of a dark horse sucking at the vein of seasonal warmth. Originally published: December 13, 2006.