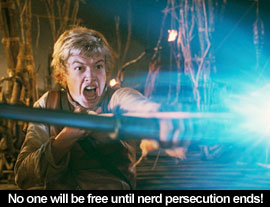 by Walter Chaw Fears that veteran F/X man Stefen Fangmeier's directorial debut Eragon, a feature-length adaptation of a fifteen-year-old trying on Anne McCaffrey's jodhpurs, would be the sequel to Dragonheart nobody wanted prove unwarranted, as Eragon is actually the sequel to BloodRayne that nobody wanted. It's ugly as sin, with the much-vaunted dragon at its centre (voiced by Rachel Weisz), designed by skilled craftspeople from both Peter Jackson's WETA workshop and Industrial Light and Magic, looking fatally inorganic to its environment. Not helping matters, the titular rider (Edward Speleers) resembles a younger, equally rubbery David Lee Roth and sports the acting chops of the same. Eragon is the towheaded farmboy who heeds a call to glory to save Sienna Guillory's beautiful Princess Arya ("Help me Eragon, you're my only hope") while gaining a mysterious old hermit mentor (Jeremy Irons--the poor sod should've learned his lesson with Dungeons & Dragons) who dies during a daring raid on the Death Star--er, on the castle keep of Darth Vader, er, King Galbatorix (John Malkovich). Alas, this Luke Skywalker also has an Uncle Owen (Uncle Garrow (Alun Armstrong)), and his Darth Vader has a henchman (Robert Carlyle) who at one point kills an underling general and declares the second-in-command "promoted." Eragon is a rip-off and a bad one, a carbon copy made on one of those old mimeograph machines: washed out, juvenile (even weighed against the not-exactly-mature example of Star Wars), and nigh unbearable for anyone so much as cursorily familiar with genre fare.

The sets are amateurish and the performances all the more so. Although it's tempting to be glib and say that Malkovich is the only person alive capable of delivering a line like "My missing stone causes me pain. Do not prolong my suffering," the truth is that no one can deliver that line; every syllable of dialogue in this misbegotten disaster is unspeakable. Luckily, what's expected of the cast is not acting, but reacting--mainly to a dragon phantom that spends most of its time looking wise--and wondering whether Eragon is more like Dungeons & Dragons or some gay kid playing with a He-Man action figure. The battles are stultifying at best, retarded at worst, and examples in any case of the poor stuntwork and non-choreography that typifies Uwe Boll's aggressive failures. With Star Wars the best picture that Eragon could hope to be compared to, also note glimpses of the male-bonding phallus-fight flirtation of Peter Hyams's crazy-bad The Musketeer (another film in which a lofty talent roster (Stephen Rea, Tim Roth) plays second fiddle to a chunk of wax in tights) and the inevitable comparisons to Jackson's Tolkein adaptations.

There's no sense of grand epic scope or ambition in Eragon, though--the whole thing feels like a children's pageant you endure in a neighbour's backyard one afternoon. Having never read the books (it's a trilogy, I guess, and the end of this one sets the stage for the inevitable sequel), I don't know if they're also as crappy, but far from inspiring me to pick them up, the picture has inspired me to stare at a blank wall for a few hours in the hope that Djimon Hounsou in extensions and an oddly-fey breast plate will fade from memory. Stupid, sexy Hounsou. Eragon is godawful by every measure, if not really dispiriting in the way that a lot of cash-grabs are: you don't get a sense they were trying to make a bad movie inasmuch as this was absolutely the best they could do. (It's an object of pity more than one of derision.) It's possible that children familiar with the book will be happy to fill in the narrative gaps and vacuous characterizations, but it's hard for me to believe there's another audience for the picture. While the presence of Carlyle, Malkovich, and Irons would at least seem to point to some camp pleasure in the margins, take this as fair warning that there's nothing remotely pleasurable about any single moment of Eragon. Better to rent the theatrical cut of Star Wars while you still can and call it a day. Originally published: December 13, 2006.