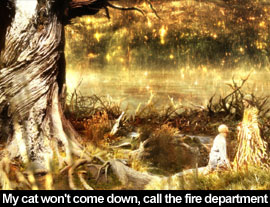 by Walter Chaw As deeply emotional and damnably frustrating as any work of pure individual vision must be, Darren Aronofsky's long-gestating The Fountain is officially devastating from about thirty-minutes in and buoyed by its singular vision for the remainder. A film that defines the fatigued term "ambitious," it's the story of Man's need to transcend the physical, to defeat mortality, to address the divine that takes the form of what the director has called "science-fiction for the new millennium." Is it arrogant to seek to redefine an entire genre? No doubt--but it's that exact genus of hubris under the microscope in The Fountain, with its three interwoven storylines concerning the courage to explore new worlds armed and shielded only (and enough) by dogged, ragged faith, and so Aronofsky's arrogance becomes, only as it should be, the connective fibre that binds his film together. The Fountain is philosophy, posing questions about the nature of art, of communication, of the truly big questions of existence. And because it's good philosophy, it doesn't seek to answer the mysteries of our intellectual life, but rather offers as the only humanist answer another mystery: love. It's oblique to the point of opaque for long stretches of its "future" passage (involving the voyage to a nebula wrapped around a dying star in what appears to be a bubble housing a hilltop and a tree) and verges on the brink of camp in "past" segments set during the Age of Discovery and the Spanish Inquisition, yet it finds its core--its thematic and emotional anchor--in the "present" with a research scientist's race against his wife's voracious cancer.

The heroes of all three timelines are explorers played by Hugh Jackman, while Rachel Weisz embodies his inamoratas--and throughout, there's a low hum of grief that plays as familiar and low as a power line arcing overhead. The promise of death is grim as The Fountain opens with Conquistador Tomas on the verge of being disembowelled by a Mayan warrior as he comes into the presence of the Biblical Tree of Life--and transcendent in the end as astronaut (Major?) Tom merges an idea of Buddhist Zen with the cycles of suggested reincarnation that pull the picture through its survey of a thousand years of human yearning. It's more than a yarn about coming back, though--it's self-consciously the only story that Man has ever told Himself: the struggle, the journey, and the peace that comes with accepting that some truths surpass understanding. The Sanskrit word "shanti," invoked by T.S. Eliot for the coda to his "Wasteland" (and, as it happens, by Alfonso Cuarón's upcoming Children of Men, another accomplished 2006 sci-fi dealing with similar themes) is the articulation of that idea, and it feels as though Aronofsky means to surpass understanding in the final minutes of his film, opening the screen like Bosch's (like Dante's) multifoliate rose of the afterlife and challenging the audience to articulate what has been something like automatic writing.

The Fountain is about structures and patterns (within and without)--about love and loss and ambition and cost. It's impossible not to see in it something of the tale of its torturous creation (first as a Brad Pitt vehicle, then, years later, reborn with a budget-halved and a promising career stalled), though it's more fruitful to find in it a universal tale of the thirst for knowledge leading to the benevolent-in-hindsight denial of our right to literal immortality. A love scene in a bathtub is as intimate as the brush of a queen's hand on her champion's brow (accompanied with the promise that she will be his Eve upon his return from Eden) as a phantom's touch projected from the only living thing to another in the middle of an unimaginable gulf. For every moment I could only understand as an intention, there are commensurate moments that sing with sublimity; you leave with the feeling of having seen something that is at once inscrutable and inspirational. At the bottom, The Fountain is as elementary and as labyrinthine as a love story--as simple and as ineffable as a passage over water diseased with stars. Of all the things that it is, The Fountain is most a singular, ferociously-shepherded vision that, for all its production delays, for all its concessions to censors and producers, possesses a uniqueness and that quality of strangeness that marks great art. It's the product of the fever of ambition and its expression at any personal cost. Originally published: November 22, 2006.