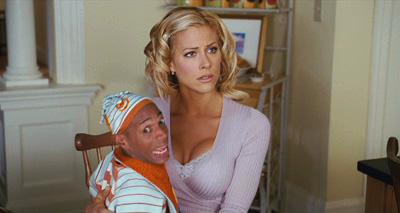 by Walter Chaw An adult male the size of a baby masquerades as a toddler in order to retrieve a diamond he's stolen and secreted in the purse of a young suburban wife (Kerry Washington) who happens to be contemplating starting a family. This sets the stage for man-baby mistaken for baby-baby jokes, man-baby resenting being mistaken for baby-baby jokes, man-baby trying to suck tits, man-baby raping his adopted mother, and getting-pissed-on gags. Meanwhile, a crotchety old man character (John Witherspoon) suspects foul play but, as he represents the other demographic no one listens to (besides black people), no one listens to him. That's it. Gut the Wayans machine's latest, Little Man, and all that slops out is a Möbius strip of high-concept sketch-comedy garbage that isn't really objectionable (save for the happy rape and the infantilization of a grown man and all that) in any way while actually managing to know itself as owing a debt to Baby Buggy Bunny en route to offering a few nightmarish, surreal images. Marlon and, I think, Shawn are the key instigators of this one, with Keenen (I bet) the man behind the flat, uninvolved camera set-ups and pacing. On the scale of such things, it's not as bad as Son of the Mask, Are We There Yet?, or Problem Child, though it's vastly inferior to Marci X.

The worst thing I can say about the Wayans' body of work is that, for the most part, it dedicatedly avoids offending anyone of any race or creed--to make a film about a pair of black FBI agents masquerading as the Hilton sisters takes a special kind of genius for appeasement and assimilation. The much-publicized supremacy of the Wayans family's entertainment empire strikes me as a direct product of how easily they're embraced by the white culture as black people who don't threaten them with dangerous observations on racism, homophobia, and misogyny. Keenen, et al are a throwback, is what I'm saying, peppering their flicks with little mini-uplift vignettes, backhands to communal bruised targets (gays, women), and a vision of African-American culture that's completely rounded, often laughable, and vanilla. What's most remarkable about Little Man is when pint-sized felon Calvin (Marlon Wayans, why not) experiences his suburban domestication, it points to all the stereotypical ills of urban youth (broken family, poverty, lack of education, criminality) as salvagable by the magic bullet of a rambling ranch house, Amana appliances, and birthday parties with live entertainment. Hooray! To help this tiny hint of ugliness go down, and before it devolves into a cartoon complete with spring sound effects and a Dave Sheridan cameo, Little Man slathers itself in scatology, crotch-punching, hilarious elder/child abuse, and a brutal ration of unearned sentiment.

THE DVD
Sony delivers this bouncing bundle of joy to home video in a 1.88:1 anamorphic widescreen transfer that, despite a solarized quality to the image, is largely without complaint, even though every frame announces itself as rudimentary filmmaking from the point-and-shoot home movie school. Not a bad criticism to observe that Little Man is exactly only as sophisticated as that from stem to stern. The DD 5.1 audio adequately renders a mix that largely squanders the soundstage by confining the mayhem to the front channels. Shawn, Marlon, and Keenen record a commentary track that has the siblings cracking up and making broad observations, all while demonstrating their limited ability to improvise and articulate. Just the idea that there's set-up and pay-off in this thing is exhibit one of the sad delusion attendant in 99% of artist commentary tracks. Featurettes-wise, "Big Comedy: The Making Of" (15 mins.) intersperses talk about inspiration with a few B-roll and F/X shots and the luminous Washington straining that vital credibility muscle extolling the virtues of the Wayans; "From the Ground Up" (15 mins.) explores the crappy/creepy visual effects; and "Linden's World" (11 mins.) offers minor insight into the life of miniature child Linden Porco, the body-actor of the Calvin character. Major points explored therein: he's stubborn, full of energy, and determined. Condescending? You bet. "Method of Madness" (3 mins.) is a short (HA! I should get a job with the Wayans!) positing that Marlon actually had himself shrunk to the microscopic in order to get into the head of his character. Pathetic? You bet.

A slew of deleted/extended scenes (28 mins.) are entirely unfunny in exactly the same way as the rest of the film, marking each elision as inexplicable if welcome. Why anyone would want to watch extended versions of Tracy Morgan doing his ghetto-tard and getting bitch-slapped by a CGI-chimera is beyond me. What's sort of interesting are a few unfinished gags where the CGI face is actually more ineptly pasted on than in the finished product. Trailers for The Pursuit of Happyness [sic], Click, and Talladega Nights start up upon insertion while a menu in the special features section provides access to the Blu-Ray teaser plus trailers for Benchwarmers, The DaVinci Code, Gridiron Gang, Crossover, Monty Python and the Holy Grail, Casino Royale, Ghost Rider, Stomp the Yard, The Pink Panther, and, of course, White Chicks. The Casino Royale trailer, by the way, is the good one. Originally published: November 6, 2006.