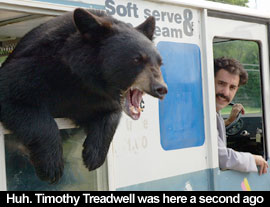 For the rest of what are most-often described as "cringe-inducing" moments, consider that although the targets in the picture are relatively soft (the kinds of provincial bumpkins Borat! skewers are fairly common the world over, after all), the audience finds itself identifying with the dupes and the prudes, the rednecks and the retards. Borat is an astonishing meta-text because it has its cake and eats it, too: we laugh because we recognize that there's something horrific about a group of rodeo-goers agreeing en masse that Bush Jr. should drink the blood of every Iraqi man, woman, and child, as well as something impolite about pointing it out. The connection between the cultural mores of the millennial United States and those of Victorian England emerge in the margins of Borat when it's not busy shooting fish in a barrel. It seems that the only value left treasured in this country is civility, and once the lights come up on our beloved alien's Kool-Aid acid test, the odd realization dawns that we might be stuck in the quagmire in which we're stuck because the best intended were too deadened to affect any sort of meaningful change in time to matter. The assholes win since they're assholes and the rest of us are just cowed and appalled enough to turn away.

That willingness to ignore the rape and pillaging of our best intentions (and the best intentions of our founding fathers) tells us everything we need to know about the longevity and success of the MPAA's rating system, which takes identical works and weighs them according to the Goody Brown school of moral censorship. It's not that I think a ratings system is misguided in theory, it's that there's something essentially unAmerican about the way this system operates under a cloak of mystery and misdirection. The members aren't named (though This Film is Not Yet Rated unmasks them), the appeals process is secretive and presided over by a member of the clergy, and this collection of soccer moms and other sanctimonious prigs actually gathers up the gumption to tell someone like Atom Egoyan how he should edit his films. Precedent isn't allowed as an argument and the reasons for a harsh rating can be as mysterious and capricious as "it just doesn't feel right"--while the old saw that you can show all the violence you want so long as you don't show a female orgasm is brought to the mat and wrestled with for a while.

What bothers me about Kirby Dick's documentary This Film is Not Yet Rated is a bit with that asshole Michael Tucker, director of Gunner Palace, who rants that his film shouldn't have initially received an R rating: I found myself, unsurprisingly, disagreeing with everything he said. Ratings matter--but the process should be transparent. There shouldn't exist secret prisons and torture sanctioned by the American government and there shouldn't exist a board of hooded censors deciding which films get distribution and ad space and which get relegated to instant forgetfulness. It's not the fact of it that galls, in other words, it's the Gestapo tactics that offend. That being said, This Film is Not Yet Rated aims for obvious targets, provides a questionable service, and is ultimately a picture without either an audience or a point, as folks who care won't learn anything and folks who don't, can't. Originally published: November 3, 2006.