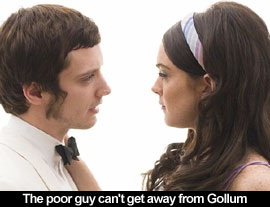 Just the idea of Bobby stinks of intense stupidity--of that taint of rich, intellectually infantile dolts dreaming up some sensitive, cardigan-wearing premise wherein a sainted icon's last day of life can be told through the eyes and mouths of "average" people. The great irony being that these champions of the average man represent said average man with such broad, clichéd, clumsy devices that they're every bit as condescending as the neo-conservative villains the picture wants so very much to vilify. When the conservative Right calls Hollywood a cesspool of shallow thinking left-wing wingnuts, this is what they're talking about. You can imagine Estevez and his aging yuppie fuckwit pals toking up and deciding that it'd be great to portray Bobby Kennedy's assassination through the eyes of lifeless workshop zombies representing the spectrum of some dimly-understood social strata affected by His martyrdom. Fresh-faced Latino everyman Freddy Rodriguez (cast as such here and in Harsh Times) provides the soul of the piece, buying a ticket to a Dodgers game for his father and himself in a holy rite that predicts his own martyrdom alongside the sainted Hyannis Portian--but Bobby reduces his sacrifice to the twin boons of passing his golden dockets to a sage, soothsaying chef (Laurence Fishburne, of course) and, later, his rosary to the fallen Catholic Himself. Latinos, as the film points out in a hilarious scene over mammy's berry cobbler, are the "new nigger," but closer to the truth that, between this and Richard Linklater's low-rent crotch punch Fast Food Nation (wherein Rodriguez, who was played by Michael Pena in Crash, is played by Wilmer Valderamma), Latinos (Mexicans) are the new Native Americans: noble savages entrusted with the full burden of conscience and outrage in these United States.

Other targets of Fast Food Nation, a fictionalized adaptation of Eric Schlosser's non-fiction exposé on the evil practices of the American retail infrastructure incorporated, include puppy mills, underage drinking, the very idea of Wal-Mart, minimum wage, economic caste systems, drugs, immigration, and, shoehorned in there somewhere, the cruel indignities of high-volume meat processing. Footage of the actual slaughter and butchering of doe-eyed cattle follows fast behind a sad analogy made between said cattle and all of docile America, suggesting that Linklater wants to parallel meat led to the slaughter with Americans led to mass-consumerism. As social satires go, it's somewhere in the neighbourhood of those late-night college bull sessions spent in a haze of marijuana and a hard-on for that girl who smells like rose oil and belongs to every activist organization on campus. (Who of course is going home with that callow asshole Emilio Estevez no matter how convincingly you pretend to give a shit about glaciers and owls.) By the end of its scattershot outrage, the only clear message is the condescending delivery of the factoid that cows die before they're turned into hamburgers. You're led to the uncomfortable, outrageous conclusion that the animals' deaths are more exploited (and rendered senseless) by Fast Food Nation itself than they are by the restaurants and meat packers the film does its best to condemn.

There are no strong statements in Fast Food Nation, just bumper stickers. It's a shame, because the subject of our literally and figuratively eating shit to maintain a certain lifestyle deserves to find articulation from mouthpieces more articulate than Linklater, Linklater favourite son Ethan Hawke, Bruce Willis, and Kris Kristofferson (performing the same function as Sam Elliot in the ultimately-as-useless but at least wry Thank You For Smoking), oozing onto the screen and slinking off to the beat of Linklater's patronizing compositions and interpolated cross-cutting of burger exec Don (Greg Kinnear) watching porn in his posh hotel room and a dozen Mexican nationals sharing a motor-inn bunk while waiting to perform their ten-dollar-an-hour dream jobs. Simply elaborating on the complexity of wicked fast food franchises offering naturalized Mexicans the chance to own a business and, perhaps, advance within the corporate structure while raping (again literally, with a plant super (Bobby Cannavale) putting the wood to his helpless charges) their own kind in the production-side would have instantly transformed Fast Food Nation into a thoughtful examination of the impossibility of our industrialized situation instead of an inchoate screed delivered by idiots to like-minded idiots.

What Bobby and Fast Food Nation share (besides the roundelay structure, the star-filled cast, the mindless liberal ranting made instantly quaint by our most recent Congressional elections--see also: Crash) is an intensely distasteful taint of superiority. That feeling that these people believe they're teaching anybody anything; that they're making an important film, nutritionally-rich with messages people like Roger Ebert will subsequently champion as such. It's not about art here, it's about instruction presumed to be long in coming--and while the far Right in this country believes (and not without profit) that its slavering base is comprised of backwards mental defectives, one of the charming attributes of the suffocatingly-correct far Left is that it didn't. No opportunity to explain itself is left trusted to audience intelligence; no awkward analogy left without instant clarification for those who might be having a little trouble understanding that the late '60s were a divided time (just like today, get it?) or that other people have to kill and prepare our meat because we'd rather pay them to do so than do it ourselves. Both roads lead to the conclusion inescapable that we as a culture are corrupt, bloated, materialistic, self-serving, and mean--points made with the reductivism and divisiveness these folks would quickly find in others and points made meaningless because they're illustrated with little intelligence and temperance. Not merely bad art, but bad politics, rhetoric, and thinking, too, Bobby and Fast Food Nation are born of the same punditry that most the United States has rejected: victims, both, of a rising tide towards the middle and an end, if one is hopeful, of the cheap hate-mongering and moron-baiting engaged in by either side of the culture war.