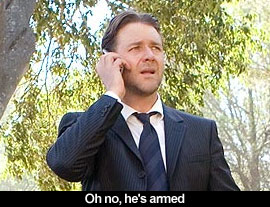 by Walter Chaw The Fighting Temptations, The Family Man--the list of sappy redemption flicks about terrible assholes is as long and lamentable as Ridley Scott's interminable A Good Year. Masquerading as a man-opause version of Under the Tuscan Sun, it is instead an incredibly cynical play for exactly the kind of audience Scott and Russell Crowe don't reach and, apparently, shouldn't bother trying to seduce. Imagine a light, frothy romantic comedy written by Dostoevsky and directed by David Lean: every pratfall registers like a cattle stampede, every delightful romantic misunderstanding like a nuclear disarmament talk. Meanwhile, all around it, golden-drenched landscape shots of Provence play the part of the grinning idiot, dancing like crazy to distract the potentially-duped. (Scott at his best works in palettes drained of warmth and heat. Even the sunny Thelma & Louise plays like twenty miles of rough road compared to A Good Year's pretty postcards and stultifying stereotypes.) With the whole mess paying off in the most unlikely and irritating sequence of happy endings in a film not directed by Garry Marshall (or his Limey equivalent, Richard Curtis), the choices are either that you believe Scott and Crowe to have lost their minds or that A Good Year is smug and strident for the very reason that its creators are supercilious jackasses long since detached from any notion of the possible. Moreover, the picture demonstrates a marked disdain for those poor sods who aren't millionaire stockbrokers or possessed of dead uncles with a sprawling villa to will to their heirs.

Said man-of-privilege Max Skinner (Crowe) gets a soul by mack'ing a hot local (Marion Cotillard) in a calendar panorama. Flashbacks to Max's bucolic childhood on the knee of his late uncle (Albert Finney) try pretty hard to humanize Max yet are more successful in pissing off anyone in the audience hoping their lives won't be bled through their eyeholes with a cash-baited hook. Max represents the modern fantasy of the emasculated male seeking redemption from a life of earning reams of money through discovering the value of rosebuds and gathering them while he might. It's the Oedipal detective story where the quarry is the hidden self; stories like this are at their heart puerile and indistinct, all the more so when the resolution is happy instead of a tragedy of regression and arrest. It's unfair to say that A Good Year is a failure at everything because the hard truth is that A Good Year--an excuse to visit a nice part of the world on someone else's dime--is every bit the misanthropic, remote bit of genre hijacking it intends to be. On a scale of scandal, it's not up there with Enron, I guess, but add it up and the money being siphoned off by people who know that they're making market-engineered bullshit for the almost-exclusive joy and admiration of their agents, bankers, and accountants is actually pretty damned scandalous. One thing to produce bad art with good intentions, another thing altogether to knowingly manufacture a broken product using someone else's blueprints for the express purpose of jilting old people and lonely women out of their money.

Look closely at David Ayer's L.A. story Harsh Times and you'll see a similar story of a man emasculated by the world who finds his actual self in the arms of a beautiful woman in a foreign country. But Ayer's has hero Jim (the ubiquitous Christian Bale) pull a gun on his pretty señorita (Tammy Trull, bound for stardom) after she makes the bad mistake of telling him she's pregnant and, worse, expressing hopes for a future with him. A former Army Ranger with a bad habit of getting fucked up, being a bad influence on his buddy Mike (Freddy Rodríguez), and having flashbacks to his own coming-of-age killing "hajis" indiscriminately and brutally in some vague Middle Eastern battleground, Jim is clearly insane and, as played by Bale, barely able to mask his fear and anxiety with a swig of liquor and sudden bursts of violence. Like Michael Mann's recent urban anatomizations Collateral and Miami Vice, Harsh Times peels away the layers of civilization we use to create a palimpsest of our simian natures. The cycle of action-reaction, culminating in an ending here that speaks of rough grace and what can only be a brief sanctuary, is punctuated with a poetic but authentic sense of how men talk each other into and out of things, of the dual Freudian temper of the masculine perception of women, and of how it's all just about roving tribes of apes intersecting one another to no good consequence.

Harsh Times is overblown melodrama. Bale's performance is ridiculous and sublime in the same moment while Ayer's screenplay and direction are hyperbolic to the point of genuine hysteria. It is in its way as much of a soap opera as A Good Year, as much the fable of man pinioned squirming on the end of a point. Still, at the heart of the piece is the reality that men can be really stupid, pumped full of sperm and vinegar, and retarded to the point of incoherence when goaded by one another into honouring imaginary codes and arbitrary rules of conduct. It's noir rewritten as chaos and decay, with the man looking for structure in the wasteland, an illiterate psychopath only really qualified to go into law enforcement. Too reductive to say that Harsh Times is just another Training Day for Ayer--better to identify the piece as a cartoon about what masculinity looks like in the first few years of the new millennium: unmoored and anxious at home, enraged and indiscriminately murderous abroad, and dreaming of quiet somewhere golden and impossibly far away. Originally published: November 10, 2006.