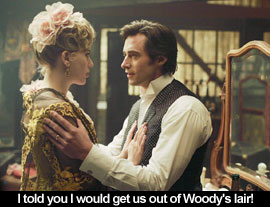 by Walter Chaw It's possible to say that Christopher Nolan's perplexing chimera of a film, The Prestige, has something on its mind about not only the nasty, zero-sum game of vengeance but also the belief that if you cut one head off a malevolent beast it will, hydra-like, sprout another. It's a costume drama that feels like the world's darkest, dour-est, most inappropriate thriller serial, placing a series of increasingly complicated and unpleasant revenge-scenarios in chronological order and reminding of, if anything, just how bad Nolan's Memento makes you feel. The Prestige shares a heart of darkness, after all, with that film: a belief that men are essentially callow opportunists and liars who will misuse the people in their lives in order to maintain an illusion of command, however tenuous, over entropy. The manipulation of illusion is arguably the auteur mark of Nolan, who played with the idea of the manipulation of fear as a weapon in Batman Begins, the practical purpose of dream sleep in his remake of Insomnia, and of course of identity as fluid, ephemeral, and dangerously malleable in Memento and Following. Matching this director with a strange, campy film about turn-of-the-century magicians engaged in mortal combat makes a lot of sense.

Angier (Hugh Jackman) and Borden (Christian Bale) are aspiring magicians as the film opens--apprentices, along with Angier's wife Julia (Piper Perabo), in some hack's tired stage act. When Julia dies, Borden is blamed, and Angier begins a campaign to bring Borden to some hazily-defined idea of Old Testament justice. His weapons are humiliation and professional one-upmanship (and guns and hatchets and booby-trapped boxes and stolen cushions); when Borden begins to respond in kind, the fallout before the last act's disquieting resolutions involves Angier's girl Olivia (Scarlett Johansson, testing my faith with a terrible accent) in addition to Borden's wife Sarah (an exceptional Rebecca Hall) and daughter Jess (Samantha Mahurin). It's hard to watch--and Nolan takes pains to confuse our allegiances in ways that suggest a very British class tension (Borden and ace engineer Cutter (Michael Caine) share a Cockney brogue while Angier, a Yank, is cut from different cloth), a certain nationalism, and, in the figure of Nikolai Tesla (David Bowie) at play mad-scientist-like in a mythical Colorado Springs, a clearly delineated duel between magic and the notion that technology before its time is a kind of witchcraft.

Long stretches in fact threaten to turn The Prestige into a Grand Guignol melodrama not unlike David Cronenberg's extraordinary version of The Fly. Tesla's declaration that a machinery he designs for Angier needs a different kind of material (a cat, as it happens, instead of Cronenberg's unfortunate baboon) for proper testing, in particular, inspires a thrill of dread at the midway point. But The Prestige seems more interested in prestige as we currently define it, falling back at moments of consummation on its extraordinarily dedicated cast's careful characterizations as opposed to the full potential of the madness that its first hour establishes in earnest. Often campy, the movie isn't, until its end, campy enough, turning its final sting into more a confirmation of the sobriety of its build than the release of revulsion that I suspect was the intention. Still, the picture is one I rooted for, that I wanted desperately to work just a little better. Tesla at war with Edison's gang of hired goons in a wintry Overlook wonderland is a wondrous fantasia; a story told through twin diaries and a voiceover narration by consummate artist Caine shouldn't work as well as it does (and yet doesn't quite work as well as it might). The aggregate affect of The Prestige is that you can't believe what you're seeing, yet you wish that its most fascinating wickednesses were allowed more room to fester. What's left is a handsomely appointed exercise in filmmaking and performance and a lingering aftertaste that creates no little excitement for Nolan's upcoming Batman sequel The Dark Knight, even as it lodges itself as not much more than a (perhaps shockingly) bitter little pill. Originally published: October 25, 2006.