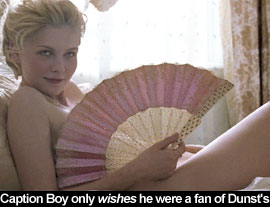 The moment that vulnerability turns to defensiveness--when Marie declares that she would never suggest the starving proletariat eat cake--is the same moment Marie Antoinette loses its hustle and flow. Best left a confection of surfaces that climaxes during a shoe-frenzy montage following the rival birth of a sister-in-law's male heir, the picture has as its strength the ability to find common ground in the plight of teen girl-dom eternal and to see spending sprees and personal shoppers as an extension of some subsumed coital frustration. Versailles is a high-school battleground complete with favourite teachers, cruel principals, dreamy boys, meddling mothers, best friends to cry with, and outcast unfortunates (Asia Argento, finding her dream role as the floozy mistress of Louis XV (Rip Torn)) to humiliate. Marie's is a life of masked costume balls as well as, in a delirious picture's most delirious moments, gambling, playing stupid parlour games, and staying up to watch the sunrise, drunk and drunk on the romance of sleep deprivation and youth at its terminus. You can see the little girl lost in these reckless moments--they're like the karaoke montage from Lost in Translation. It's fun and it's mortal. But Coppola isn't content to let that delirium ride through to its known conclusion, giving her teen-queen alter ego the burden of existential grief before giving her the edge of the guillotine blade. Empathy eventually wanes for this party-girl martyr.

The hero of Terry Gilliam's Alice in Wonderland by way of Andrew Wyeth (and Flannery O'Connor) is a little girl lost of another sort. The daughter of twin junkie caricatures Noah (Jeff Bridges, cranking The Dude up to "11") and Queen Gunhilda (Jennifer Tilly, doing Nancy Spugnen), Jeliza Rose (Jodelle Ferland) is left to fend for herself in a burnt autumn landscape alive with fireflies and overturned schoolbuses and patrolled by mental defectives (Brendan Fletcher) and Red Queens (Sally Crooks). Jeliza whiles away her lonely hours providing voices for disembodied dolls' heads and imagining white rabbits and mad tea parties; meanwhile, her father's rotting corpse is embalmed and tanned to sit at the head of a family reserve. There are elements in Tideland of Gilliam's aborted The Man Who Killed Don Quixote (the equation of a train that slices through the Grant Wood-side with a mighty beast to be slain its most complex image of transportation, arrest, and romantic madness), especially in the character of a hero who is heroic only in her dreams, making a heaven of a her hell. Elements of Fear and Loathing in Las Vegas surface, too, in its canny deployment of magical realism and, in truth, its long stretches of unwatchability.

It's southern gothic--a literal train wreck of a film that relies entirely on mood and the performance of a little girl miraculously occupying every frame of the film. Except for its excessive canted angles and camera movements, it's the least cluttered of Gilliam's films--and even those times where the picture seems prepared to delve into necro- and pedophilia speak to a child's perspective on death and love. It's almost a pastoral, coloured of course by a feeling of pervasive dread. Tideland is a terrifying picture because there's a real sense that there's no law in it that would discourage Gilliam from venting his spleen and carefully-tended garden of neurosis all over little Jeliza Rose. And so he does. A diary of pain and a chronicle of the armour of mythology an imaginative mind expels to salve it away, it's a film so personal, so vulnerable, that it becomes Gilliam's own emotional history of rejection and isolation. Originally published: October 20, 2006.