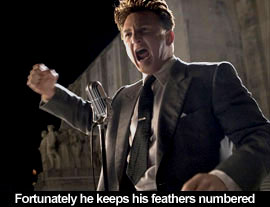 by Walter Chaw SPOILER WARNING IN EFFECT. Ask most wags and they'll tell you that Sean Penn is the best actor of his generation; for a performance or two (consider that in Dead Man Walking, he goes the distance without the use of his hands), I'd be inclined to agree, but look at the way writer-director Steven Zaillian and, especially, composer James Horner, treat Penn in the long-delayed All the King's Men--and marvel at how little they think of their leading man. The second adaptation of Robert Penn Warren's 1946 Pulitzer Prize-winning novel about a populist-leaning stump-thumper modeled after Huey Long, the film garnered attention first for its sterling cast and Tiffany pedigree, then for its sudden disappearance from last year's Oscar slate, only to appear now, without fanfare (save a gala screening at last week's TIFF), in the middle of what's traditionally a dumping ground for dead weight. And every time Penn delivers an allegedly rousing speech to a gaggle of hicks, proposing to nail the entrenched fat cats in the Big Easy's beleaguered senate to a rail, Horner's tiresome score endeavours to drown him out in a flood of sugared plastic emotion. Still, at least this sloppy brass orgy has a pulse, as opposed to Horner's "mournful theme," i.e., the one that accompanies the retarded voiceover narration of journalist Jack Burden (Jude Law), which sounds a lot like the piano exit music from the old "Incredible Hulk" TV show. If you believe your actors are capable of conveying emotion and nuance, you don't shoot them in sexy angles and luxury car commercial colour schemes while trying to drown them out in spasmodic torrents of empty, manipulative noise.

The story Willie Stark (Penn) going from a hick with no prospects to Governor of Louisiana is told through the soporific filter of Burden's association with the man as, initially, a bemused beat reporter and, finally, a leashed muckraker and media bulldog. His last task to dig up some dirt on Stark's enemy (and, as it happens, Burden's adoptive/maybe-real father), Judge Irwin (Anthony Hopkins), Burden all along is burdened (get it?)--and, by extension, so are we--by the spectre of one night spent with his long, lost love Anne (Kate Winslet). This matters because Stark is courting Anne's brother Andrew (Mark Ruffalo), hoping he'll lend his name to a new medical facility Stark is itching to build and, we presume, graft from--though the film's machinations are so Byzantine and confused that it's flat impossible to give much of a shit one way or another what happens to anyone in the picture. In a project that relies on the Greek-ness of Stark's rise from a grassroots-loving Mr. Smith to an entrenched politico lining his pockets and hiring gunmen as his drivers, it would have helped for Stark to appear to be genuine before gradually becoming corrupted by his hard-won power.

As it stands, there's not a moment that holds any bit of interest or taint of bigger truth, as All the King's Men trundles along its self-important, fatally-misguided way. It fails as political allegory, fails in truth in providing any kind of revelation. The performances run the gamut from Rhode Island Red (Penn) to Hopkins again trying to pass as a Yank and succeeding mostly in demonstrating that he's horribly limited and more than content to phone it in. It's unbelievably boring and ineffably alien, and when it comes time for Stark to meet his historically-mandated end, Zaillian, the screenwriter of Schindler's List, resorts to that film's black-and-white-into-red pretension. (Believe it or not, he even has the chutzpah left over to shove in a scene of blacks and hicks dropping flowers on Stark's memorial slab.) For how high it aspires, for how badly it wants to be taken as prestigious (badly enough to ask its trio of Brit A-listers to try on a Louisiana brogue with variously appalling results--none, however, as appalling as James Gandolfini's Tony Soprano-cum-Paul Prudhomme), All the King's Men is the frontrunner for, if nothing else, at least one end of year honour: So far, it's the worst movie I've seen all year. Originally published: September 22, 2006.