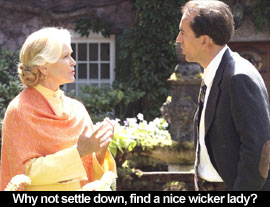 by Walter Chaw You mark off certain literary flourishes in Neil LaBute's remake of Robin Hardy's classic The Wicker Man, and then you can't help but note that beneath the pagan matriarchy that is its villain and the hangdog cop (Nicolas Cage) that is its dullard hero, the film is just the auteur's latest unnecessarily reductive gender deconstruction. It's another major disappointment from the man who put humanity on the spit in In the Company of Men and--to a lesser, if no less affecting, degree--Your Friends and Neighbors. This redux hates women and, more, it hates femininity--typical LaBute, you could fairly offer, especially after Possession and The Shape of Things; The Wicker Man demonstrates again that LaBute is one of the brightest, most well-read American directors working--and that he's become incapable of focusing his smarts on a target other than the cruel and essentially alien nature of women. Hitchcock's films are arguably as obsessed, but his "wrong men" were hardly free of complicity in the construction of their own downfalls. Fatal to the production, then, is the introduction of an unsullied male hero--a literal martyr this time instead of the figurative types of LaBute's last couple pictures: a man of action (no milquetoast intellectuals here) struggling against a rising tide of castrating, hippie harpies.

Two full moonscapes vs. two orange sunrises (the fullness of the feminine vs. the right reason of the masculine) separate this girl vs. guy bout into neat, equally-spaced rounds. The battle is between chthonic mystery and ratiocination, thus it's a fertility cult that keeps men are on leashes pit against sheriff Edward Malus ("You gonna go for detective?" a co-worker asks Mr. Wonderful), who journeys to lush, remote Summerisle in Puget Sound in search of a missing girl at the beck of his estranged fiancée (winsome, beautiful Kate Beahan). Officer Malus is named after a genus of apple dependant on pollinating insects, making his allergy to honeybees the kind of little joke LaBute enjoys while serving the dual function--after the nod to the original film's virginal protagonist--of introducing Summerisle's thriving apicultural industry. What else would a goddess cult use as their chief source of sustenance and income but a product produced by a queen-led society? (And who else would they victimize but this drone of a man?) Malus's intrusion into the self-described "colony" is met with seriocomic hostility and provincialism; he's doomed to be the only person in any theatre who doesn't realize that his phallo-centric weapons (gun, money, reason) are useless against the wet, enveloping chaos of the islanders.

This would be fine if Malus's idea of order were constantly usurped by the "Key West" of the women--and the original film's establishment of the thorny divide between Christianity and Paganism strikes a resounding chord in that pursuit. But rather than a Wallace Stevens poem, LaBute references William Blake. In a classroom scene that threatens at any moment to become chilling in a way the rest of the film is not, LaBute includes a part of the opening "Argument" from Blake's astonishing "The Marriage of Heaven and Hell":

Once meek, and in a perilous path,
The just man kept his course along
The vale of death.
Roses are planted where thorns grow.
And on the barren heath
Sing the honey bees.

Blake continues with a series of contraries ("Without Contraries is no progression. Attraction and Repulsion, Reason and Energy, Love and Hate, are necessary to Human existence"), declaring his thesis to be that "Good is the passive that obeys Reason. Evil is the active springing from Energy. Good is Heaven. Evil is Hell." It also happens to be The Wicker Man's thesis, which is all well and good save that Blake's extremes are complicated by his affinity for this "Evil" and, later in the same piece, his disdain for this passive "Good." Heaven for Blake is ironic, making the Heaven of Malus's dedication to reason (and love and attraction, should we follow this argument) the malefactor, and the Hell of Summerisle's mad, procreative Energy the hero.

Yet LaBute takes Blake at face value, turning Malus into the forbidden fruit sampled by the Eves of this Eden and closing on a particularly vile epilogue that believes it's making hay out of a literalization of the concept of the femme fatale. The Wicker Man is Romanticism without melancholy, handily transforming it into something that feels like a man of straw rather than of wicker, erected to illustrate a point about original sin and the tactics men and women employ to wallow in it. The only irony left in The Wicker Man is that LaBute's head, his reason, seems at terminal odds with his carnality--the tantalizing suggestion being that if a successful marriage were ever engineered to join this artist's personal Heaven and Hell, these late cinematic offspring might finally be as vigorous and rich as his firstborn.