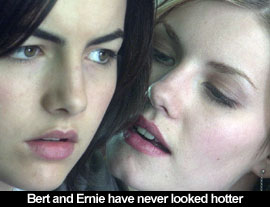 by Walter Chaw Laden (leaden?) with melo-tragedy, Jamie Babbit's The Quiet is a burlesque of high school and incest, and though I don't doubt that there's a great movie in the intersection of the two, this ain't it. The film stars Elisha Cuthbert as the wounded "Heather," Nina, whose reputation as the perfect girl (read: the head cheerleader) is stained by a home life dominated by a zombie mom Olivia (Edie Falco) and an all-too-loving pedophile nice guy dad Paul (Martin Donovan). It wanders into the mind listlessly a time or two that Nina's backstory is identical to something the crazed Christian Slater character from Heathers would manufacture to justify the "suicide" of some teenage girl he's just murdered. The only way to really up the ante in The Quiet is through the introduction of deaf-mute orphan Dot (Camilla Belle), taken in by Paul and Olivia to act as the shadow/doppelgänger to our damaged-goods protagonist--and sure enough. But Dot can play Beethoven's "Appassionata" and "Moonlight" as the situation demands, and she provides treacly narration throughout in her piping, irritating lilt. She even goes so far as to attract chronic masturbator Connor (Shawn Ashmore) away from Nina's cartoon of a queen bitch pal Michelle (Katy Mixon).

Search hard for satire and you'll discover ham-fisted solemnity instead. I miss Donovan's collaborations with Hal Hartley; every indie credible project in which he finds himself (though, honestly, I don't know if I'm more horrified that he's in Agent Cody Banks or The United States of Leland) only widens the gap between what a gifted artist with no budget can accomplish and the sincere "message" movie that passes for Sundance-certified nowadays. The question with heat has to do with the nature of The Quiet's message, anyway--I mean, surely it can't be a searing indictment against fathers banging their daughters and mothers medicating themselves into oblivion, can it? More likely, The Quiet--in title and, ostensibly, in title character--is a hopelessly sincere metaphor for the pain of societal and personal repression. Enough so that it's not unfair to wonder whether Dot began life as a psychotic split from the good ship Nina, or if the script was originated by a high-schooler during a particularly intense hormonal episode.

It's not a fairytale and it's not a fable. Moreover, it's not recognizably anything of real value at all. The only thing the film succeeds at is the unfortunate feat of creating a work of prurience whereby twenty-three-year-old Cuthbert in a cheerleading uniform and less becomes an object of true distraction. The Quiet produces the disquieting effect of being naturally interested in seeing a grown woman pretending to be a high-school cheerleader in various states of sexual compromise. Though Cronenberg made some hay with this sort of thing in the contrasting sexual fantasies that bookend the exposition of A History of Violence, Babbit, dipping her toe into the same psychosexual pool, just doesn't have the water wings to make it float. But what ultimately sinks The Quiet is that it's ridiculous. Not that such a thing could never happen, but that these words, these people, that character, create a perfect storm of overheated improbabilities. It's the world's most inappropriate Harlequin romance novel: a heavy-breather of a potboiler for Judy Blume's audience of babysitters and old men in long coats. Originally published: August 25, 2006.