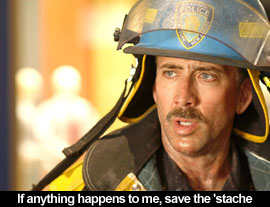 by Walter Chaw I laughed a little during Little Miss Sunshine, a piffle of a movie that boils down to that Blind Melon music video where the chubby girl in a bumblebee outfit finds joy at the end of three minutes of kicking ant piles by dancing in a field of misfits also wearing bumblebee outfits. It's a smarter, less-angry version of Transamerica while featuring the same number of depressed gay people and Harold & Maude-esque teenage boys; it's got the Wes Anderson stamp of approval for its coterie of sage oddballs, deadpan surrogates, and family decompositions; it has a stellar cast doing extremely predictable work at a stellar level; and it comes with the Sundance stamp of approval predestined for it because Little Miss Sunshine is a summary of every independent film since "dysfunction" became a hot-key button on critics' keyboards.

It's no wonder that the film is the new indie sensation because, in its way, Little Miss Sunshine is the Scream of its genre. If you were to bring a checklist, you'd tick off every quirky character box, from the foul-talking senior citizen (Alan Arkin) through to the reptilian father (Greg Kinnear), the wistful daughter (Abigail Breslin), the suicidal gay uncle (a winningly reserved Steve Carrell as the world's premier Proust scholar), the mop-topped, Nietzsche-reading teen too smart for this world (Paul Dano), and the tough-talking, big-loving, long-suffering mom (Toni Collette). It's a road trip movie that ends in the "Big Competition," layering in a disappointment for each of the main characters. Dad's 9-step program to self-empowerment doesn't get the book greenlight he's been promised; Gramps learns the real cost of snorting heroin and reading roadside porn; teen's elaborate plan to undertake a vow of silence until his acceptance into the Air Force Academy hits a roadblock; and suicidal gay uncle touches us all, but in a welcome way. Targets include insensitive assholes who tell their young daughters they're fat and former beauty-pageant participants who pimp out their toddlers in hooker-wear for the express purpose of crippling them with self-esteem and performance issues for the rest of their trailer-bound lives. The ultimate message is that you should make lemonade and blood is thicker than water.

Saving grace for Little Miss Sunshine is that, despite its essential triteness, barnside targets, and a phenomenally misguided ending, its parts are more than the effect of its whole, with Dano's smart, soul-sick suburban philosopher (a giant, hand-sketched portrait of Nietzsche hangs on a bedsheet in his room) providing a Greek Chorus that's free, somehow, of rancour or judgment. The film walks that line and walks it well: you're not often left with the impression that it's hanging its characters out to dry for the sake of a joke at their expense. The weight of the world piles on this collection of pathological losers, and Little Miss Sunshine admirably decides against adding to it with our derision and condescension. I do wish that it didn't seem so inconsequential when all's said and done, because, in truth, everyone does such a nice job (Breslin, in particular, is fast becoming a reason to see a film by herself) with what they're given that I felt kind of badly that they weren't given something less threadbare and obvious.

The same feeling troubled me following Oliver Stone's static, workmanlike retelling of the true rescue of two Port Authority policemen trapped in the ruins of the Twin Towers. Afraid of stepping on toes and stung, I have to think, by the reception that greeted Stone's hilarious rummage sale Alexander, World Trade Center is Stone at his most well-behaved. One senses the conspiracy maniac champing at the bit in the stray shot across the bow at how we're going to avenge this blow against our country (by taking down a Middle Eastern nation because its despot once tried to kill our current leader's daddy, apparently), or in recycled footage of Bush Jr. jetting across the country, pausing long enough at the stray landing strip to deliver robot platitudes and promises of vengeance--yet Stone resists politicizing the events of 9/11 by presenting what can most delicately be described as an entirely unexceptional film about completely familiar events. Nicolas Cage is twenty-one year vet McLoughlin while Crash-saint Michael Pena is rookie Jimeno; Maria Bello and Maggie Gyllenhaal, respectively, are their wives, and the events of the day play out in the style of an Irwin Allen disaster movie. McLoughlin and Jimeno hustle through the early chaos of lower Manhattan on that fateful morning, glimpse flashes of something or another momentous happening, demonstrate courage and resolve, hear resounding thuds that we might presume to be bodies falling to Earth, and then get buried in a series of theatre-rattling cave-ins and collapses.

Fairly gripping, Stone's foxhole instinct pairs well with this story, what with its militaristic uniform roll call and camaraderie between men under extreme duress. Once the buildings collapse, however, World Trade Center becomes a long time in the dark with actors pinned beneath tons of faux-rubble and the standard guilt about things not said to their loved ones before the sky fell. It's a carpe diem film, in its way, with Stone providing a few quiet flashbacks to happier times, many of which involve McLoughlin beaming like an idiot over his children while his adoring wife looks on. Controversy is scrubbed from their lives (though it's suggested by Bello's wide-awake missus listening in silence to her husband going off to work) to the extent that no clear picture of who these men are emerges from the wreckage. What's left is a curiosity in Stone's career: a film that's afraid to suggest friction and that regards issues ripe for satire and examination (like the looney tunes Marine Staff Sgt. (Michael Shannon) who goes debris-diving at the advice of the Lord) with a straight, crowd-pleasing face.

For all his faults, Stone never much seemed to care what anyone else thought of his pictures before, making World Trade Center his most compromised-feeling picture as well as his most conventional. It's hard not to be apathetic towards a story with a pre-determined outcome (especially one that compacts Cage into a monosyllabic ball), and there's something un-serious about a film centered around two survivors of an event that claimed three-thousand lives. It's a READER'S DIGEST "Drama in Real Life" composite picture, its epiphanies minor and its execution pure movie-of-the-week. Maybe that's where Stone's buried his edge: in the idea that the reason we've turned 9/11 into an uplifting greeting card is that we've become too sissified as a nation of passive observers to be able to assimilate such an offense without an Oprah/Dr. Phil strategy of platitudes and soft-focus montages firmly in place. It's "always look on the bright side of life" as our new national slogan of mental illness and denial; at least Little Miss Sunshine knows it's about losers. Originally published: August 9, 2006.