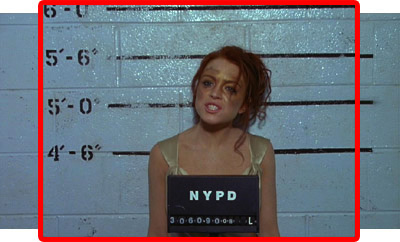 by Bill Chambers A movie as ill-conceived as the original Bring It On (yeah, let's root for the privileged white chicks against the...all-black inner-city cheerleading squad?), Donald Petrie's Just My Luck fatally hitches its wagon to the miniscule charms of Lindsay Lohan. The migraine begins to form as soon as Lohan makes her grand entrance as PR chick Ashley Albright, striding out into the pouring rain without an umbrella knowing full well that the weather will clear up to accommodate her. (It does.) After scraping his jaw off the sidewalk, her Stepin Fetchit of a doorman hails a taxi, and while climbing into it Ashley notices a five-dollar bill stuck to the bottom of her boot. Does this cosmically-pampered princess tip the doorman with it? LOL! She's admiring the creases in Lincoln's beard as the cab peels away. Later, Ashley will receive two barely-provoked, if wholly deserved, punches in the face from a jailed black woman, while a Suge Knight-type record company overlord (Faizon Love) will declare: "I used to be [an idealist and a purist]...but then I decided to become filthy rich." I'm as surprised as you are that D.W. Griffith didn't write the treatment for this thing.

But inciting darkie panic may be the least of Just My Luck's myriad offenses. Although Lohan has no comedic instincts and delivers every line of dialogue in that laryngitic monotone of hers, it's not merely her phantom appeal that gets her into trouble here. With her ubiquitous presence in the media for all manner of pop-tart transgressions, she simply brings too much baggage to the proceedings; at the risk of equating a stick of Disney jerky with a bona fide screen siren (or a steaming turd with a masterpiece like Cat on a Hot Tin Roof), this must be what it was like to watch Elizabeth Taylor movies back in the day. In Just My Luck, Ashley's lifelong lucky streak comes to a crashing halt when she kisses an accursed stranger, Jake (pod person Chris Pine), at a masquerade ball, thus passing her good fortune onto him and inheriting his bad in return. Yet because of Lohan's offscreen sense of entitlement (those tales of truancy that Morgan Creek founder James G. Robinson exposed have real half-lives), the early scenes ring insufferably true, while her subsequent string of Final Destination-style torments inspires nothing but schadenfreude. In other words, postmodernism insinuates itself through Lohan's casting, but both the actress and the movie go about their business with blissful ignorance.

Just My Luck whitewashes, for example, the uglier implications of its Cinderella allegory in pinballing Ashley around New York City in search of the man who infected her1 by having her taste-test each suspect. (She then scratches a lottery ticket to see whether her luck has returned.) While the filmmakers have skewed young by reducing the paraphernalia of adult sexuality to mistletoe, they've contradictorily equated kissing with unprotected sex and promiscuity. (What is Ashley's predicament but a fairytale simile for venereal disease?) Taking this into account with Lohan's coquettish reputation, a moment where Ashley complains that one of the potential culprits bit her tongue registers as particularly skeezy: she's French'ing them?! While we're at it, why doesn't she swap fates as well as spit with any of these other guys? I guess that's a rhetorical question, since I've essentially just said that the movie is sorely lacking in foresight. 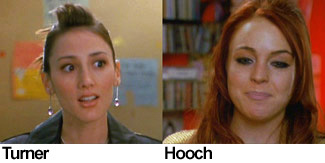 There are a few actresses in Lohan's age bracket who could've made Ashley's self-centeredness a little more innocuous, a little less soulless--Just My Luck's own Bree Turner, for instance. (Like Rachel McAdams and Alison Pill before her, the unspeakably cute Turner renders Lohan an even more inexplicable sex object simply by being in her orbit (see above A/B comparison).) Conversely, if there were a female equivalent to Bill Murray out there to endow Ashley with a puckish swagger, it might've at least transformed that section of the film where she's unbearably lucky into a genuine guilty pleasure--there are few greater vicarious thrills than watching old-school Murray reign supreme over us unsuspecting mortals--as opposed to an aggravating reminder of Lohan's unearned, unappreciated cachet. But, of course, the script is so shallow as to be irredeemable. Fitting that Sarah Jessica Parker is invoked at some point (Ashley receives her dry-cleaning by mistake and, without compunction, wears it instead of returning it), since Just My Luck is to "Sex and the City" as Brownies are to the Girl Scouts.2 One of the screenwriters actually worked on "Sex and the City" and it shows, not only in the amoral veneration of Ashley's "That Girl" smugness, but also in the scrupulous annotation of her footwear.

As for Jake: A struggling music producer repping four hobbits collectively known as McFly3, he's saintly before he inherits her luck and remains uncorrupted by the riches visited upon him thereafter. If anything, his newfound success only facilitates a latent desire to be charitable. Recognizing the newly-disaster-prone Ashley's breed of embarrassment--though not, curiously, her greasy, liver-spotted countenance--at a diner, he rescues her from a hairy situation, gets her his old job at the bowling alley, and basically invites her to convalesce from her reality-check at his tricked-out pad.4 (It's The Apartment for the T-Mobile generation.) To be perfectly reductive, affluence humbles Jake, whereas going back to square one turns Ashley into a barnacle. So what is the desired outcome of Ashley's predicament? Waiting for her to kiss Jake is a lot like waiting for Dracula to bite Mina Harker; wouldn't it make more sense to have Jake be the venal one?

After all, Just My Luck isn't interested in redeeming Ashley. Sure, she makes an overture ("You deserve my luck, you put it to better use than I ever did," she tells Jake), but as with any remotely human gesture on the aforementioned "Sex and the City", it registers as passive-aggressive bait--she's a narcissist fishing for compliments. I might add that after reclaiming her luck on a knee-jerk whim, Ashley ditches her patsy to go shopping and is wholly unsympathetic upon hearing that her friend's song has been dropped from McFly's set as a result of Jake's bad luck. (She's really kind of a sociopath.) I suppose that secularizing the film's high-concept hook would've helped: Because luck is explicitly shown to be a product of divine intervention rather than a state of mind, it leaves accountability out of the equation. But then, that's what attracted the starlet with the biggest...martyr complex in Hollywood to the project, isn't it? OMG! It's The Passion of the Lohan!

THE DVD
Fox ushers Just My Luck to DVD in a flipper containing 1.85:1 anamorphic widescreen and cropped fullscreen transfers on opposite sides of the platter. Though colours are sufficiently vibrant, edge-enhancement and compression artifacts compromise the overall integrity of the image. The 4:3 version meanwhile exhibits an abundance of grain, perhaps as a consequence of digital zooming. As an aside, this must be the nadir of cinematographer Dean Semler's illustrious career. Owing to the genre's limitations, the accompanying Dolby Digital 5.1 audio is unmemorable. A blessedly skimpy portion of supplementary material originates on the A side with three brief deleted scenes (one of which provides the requisite whiff of Yellow Peril) and "The Look of Luck" (3 mins.), a thoroughly useless featurette wherein co-screenwriter Amy B. Harris (misidentified as Amy B. Jones) opines that Lohan is "the quintessential modern girl." God help us. Rounding out the flipside and the disc proper, a 9-minute "McFly Behind the Scenes Featurette" documents the filming of the British band's climactic performance, during which director Petrie shamelessly toyed with real concertgoers to generate the reaction shots he needed. Originally published: August 21, 2006.

1. It took me a while to remember where I'd seen this before: Larry Clark's Kids! return

2. Star Wars for COSMO GIRL subscribers, "Sex and the City" has been sanitized for syndication, making it more virulent than it ever was. See, the T&A was always far less offensive than the superficiality of the show's central quartet, and now their materialistic, misanthropic doctrine has the potential to seduce a much broader audience. Having bought a white suit in sixth grade, circa the heyday of "Miami Vice", I don't doubt that it's pretty tempting for tweener girls to emulate Parker's dynamic Carrie Bradshaw. return

3. Although this is a kind of "origin story" for the real-life musicians, Lohan is probably not cloaked in as much fiction as they are. return

4. Isn't it a little, um, lucky that she runs into him again? And the bad that results from trying to extinguish a sparking hairdryer under a tap while it's still plugged in, or waxing a floor in stiletto heels, or pouring an entire box of soap into a washing machine has fuck-all to do with chance, for these are the actions of a spaz. When you get right down to it, Just My Luck is one mouse shy of becoming a reverse Flowers for Algernon. return