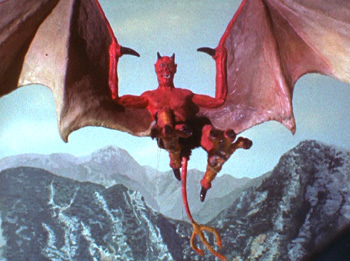 by Walter Chaw Four teens on a double-date venture into the hills around California in search of an old, dotty professor only to learn that the crazy old bat's unleashed the spawn of Hell with a book written by the devil. When producer Jack Harris bought The Equinox ...A Journey Into the Supernatural (hereafter The Equinox) and hired B-hack Jack Woods to partially rewrite and reshoot it three years after its completion, he would insert a new character in evil, unibrowed park ranger Asmodeus (Woods), thus imposing a weird element of pervy grope cinema while handily washing away in a wave of lowbrow mediocrity most of what makes The Equinox so exceptional. Comparing the two versions (the revamp's title streamlined to Equinox) is an example of the difference between gifted amateurs pursuing a passion and slick exploitation artists applying their own interpretations (this time the burgeoning drive-in market) of where they might grab the quickest buck. For The Equinox to endure as an underground classic despite its co-optation is something like The Magnificent Ambersons maintaining its masterpiece status despite the non-existence of Welles's original cut. It's quite a relief, in other words, that Dennis Muren's The Equinox has survived for comparison's sake.

The similarities between Sam Raimi's The Evil Dead and Muren's The Equinox are impossible to deny: from the low-budget Spam-in-a-cabin aesthetic (down to the quartet of student dimwits, the deliriously amateurish matching shots, the unearthing of the Necronomicon, the grandparent in the Jungian basement, and the stop-motion animation) to the eventual genre success of their respective creators, there's a synergy here, a brilliant kineticism that binds the pieces together as something less camp than camp veneration. (Indeed, The Evil Dead's makeup supervisor Tom Sullivan remarks on the commonalities and speaks in the Criterion DVD's insert of seeing Equinox at least twice on the drive-in circuit.) They're celebrations of genre and sharp rebukes to the type of cinephile who judges the temple of his experience too cramped and delicate to ever "stoop" to Ray Harryhausen or Italian zombie flicks; the arrival of Equinox in a lavish two-disc treatment courtesy The Criterion Collection is a long-in-coming shot across the proverbial bow.

Judged on its own, without Criterion's stamp of approval, the cult that's gathered around Equinox since its 1967 bow as The Equinox would be seen as lowbrow Philistines, but slot this baby in as #338 in a collection of films that, for the most part, wouldn't trip many controversy meters in regards to the "masterpiece" criteria and suddenly an entire school of film criticism--the school that actually has enough faith in film to describe sublimity outside of the irreproachable canon, and enough faith in itself to remark upon it when it's uncovered--is given a shot in the arm. Real and fulsome scholarship isn't found in the buffing of gold, after all, but in the refinement of ore that would appear worthless to the untrained or dispassionate.

That said, without casting aspersions on Criterion's discerning eye, it's not that difficult to see the genius driving The Equinox, a film shot in 16mm with a wind-up Bolex camera. Too in love with its own art to know that it's wearing its youth on its sleeve, it starts with an irrepressible energy and continues on through to the sort of mad invention that spawns a lap dissolve from the camera spinning to a spool revolving on a reel-to-reel taperecorder. At the root, what separates The Equinox from any number of films made under like circumstances is the same thing that distinguishes the passion and hustle of a gifted college basketball team from the relatively lackadaisical polish of the pros. Credit the creative nucleus, all still in their teens at the time of the film's creation: ILM wizard Muren; ace stop-motion animator Dave Allen; and matte artist Jim Danforth. Citing Willis O'Brien's King Kong, Don Siegel's Invasion of the Body Snatchers, and classic genre 'zine FAMOUS MONSTERS OF FILMLAND as their chief inspirations, the group began with the intent of mounting a zero-budget tribute to Harryhausen over the course of a long weekend and ended, as many of these projects do, with years of weekends, of editing in somebody's basement, and finally of a badly-conceived padding-out and re-configuration. What remains intact in the Harris/Woods version are a few weird camera angles, insane transitions, and brilliant in-camera tricks, miniatures, and surprisingly affecting stop-motion animation sequences.

With backstory as fulsome as The Equinox's, it's easy to gloss over or overstate the actual pleasures of the film itself. Objectively, the performances and script are exactly as amateurish as you'd expect, with long passages of robotic exposition dilating the spaces--sometimes interminably--between special effects sequences. It's not really possible to watch the film without feeling superior to it in a lot of ways, though I wonder if that feeling during its set-ups doesn't lend itself to greater surprise during its "money" shots. Knowing that sophisticated split-screen effects, front and rear-projection techniques, and professional-seeming mattes were employed by a group of kids fresh out of high school using the money an old man (Louis Clayton, Muren's grandfather, who cameos in the film) was saving for his grandson's college education adds another layer to the lull of condescension offered by its dialogue and acting. In a tangible sense, we're seduced, as we are by Raimi's The Evil Dead (and even by his Spider-Man films), into the faith--the sources and execution at times are so amateurish that when one of our quartet morphs into a red, winged demon that promptly pounces on his ex-mates, the feeling of admiration is genuine.

Better, the suggestion that the real enemy of these kids erupts from within--that some monster of the id that, once repressed, finds expression despite the best efforts of grandparents, professors, God, and chaste sweethearts--locates The Equinox with other 1960s films of tragic rebellion like Splendor in the Grass and Psycho. If our milkfed hero David (Edward Connell) could only get into the pants of girlfriend Susan (Barbara Hewitt), you suspect that The Equinox would be a ten-minute short. But without that carnal release, the picture sublimates into a rejection of an entire decade of social programming through genre: a predictor of not just The Evil Dead, but also the entire upheaval represented by Night of the Living Dead. It's a movement made graceful by The Equinox in its resurrection of time-honoured in-camera trickery and brilliant nuts-and-bolts can-do. Although that feeling of doom in The Equinox is a surprise, it shouldn't be. Looking at the partially re-shot, re-dubbed version of the picture, the demons of the piece are not so much metaphorical as they are recast into the bulls of 1950s "wild one" generational melodrama--the explanation that evil is from without tragically undermines the richest themes of 1960s cinema. The final cymbal crash of the redux's trailer (lovingly restored for this DVD) is the nonsensical "It begins where Rosemary's Baby left off"--nonsensical because it's stupid, and nonsensical because Rosemary's Baby wasn't about the devil. It's a common misconception.

THE DVD
The first platter in the Criterion package features both versions of the film in fullscreen--original aspect ratio transfers that are doubtless as good as they can possibly be. Looking at Equinox, it's easy to spot the added footage for the divergence in picture quality, of course, but also in the length of the sideburns on best pal Jim ("WKRP in Cincinnati"'s Frank Bonner, in his screen debut); a close listen also reveals a slightly better quality to the newer film's Dolby 1.0 mono audio, including the dubs that Harris/Wood inserted to allow a doctor early on to "explain" what's wrong with one of his patients. (See, the psychiatrist's explanation in Psycho wasn't offered in full seriousness. It's a common misconception.) Harris/Wood offer a film-length commentary that is lamentably low on self-awareness and high in that variety of disingenuous self-deprecation that actually makes you look like more of an asshole for attempting it. Listening to the pair talk about how they improved the film, allegedly lending it coherence by adding Wood himself as the antagonist, is a special kind of torture.

It's almost as bad as watching the ten-minute introduction by FAMOUS MONSTERS OF FILMLAND editor/creator Forrest J. Ackerman, who drops enough names in 600 seconds to make Oprah Winfrey blush. More credible is the indispensable track running beneath the 1967 version as Muren (who sounds a lot like my editor Bill), McGee, and Danforth discuss the picture's shortcomings and virtues. I was suitably amazed more than once by their gifts and by what sounds like the genuine version of the Wood/Harris self-deprecating humour. When Muren offers that the new version of the film didn't do the old one any favours, he justified--as if justification were needed--my own fanboy crush on him, harboured since his Tauntauns jogged across Hoth and his Vermithrax Pejorative punished virgins in the name of Paganism.

Disc Two contains a treasure-trove of information. "Monstrous Origins" reveals seven minutes of silent outtakes, such as a go-go pool party and the original discovery of the demon book in the woods. An all-text "About the Outtakes" serves the same self-explanatory function as the all-text "About the Taurus" that follows a two-minute "Taurus Test", which unearths an early version of the lizard-ape monster attack. An "Interview with Dennis Muren" (8 mins.) is a too-short chat with Muren that, laudably, resists going over the same old ground as the commentary track. The direct comparison here with the Taurus monster's death and a Star Wars one-sheet inspired in me the realization that the death of the Taurus is probably the granddaddy of the Rancor's defeat in Return of the Jedi. A "Cast Interview" (10 mins.) with Bonner, Hewitt, and James Duran (the actor playing a green giant in the film) is mostly fluff, but Hewitt's recollection of being intimidated and traumatized by Wood's ranger character molesting her on-camera without warning on the ahead of time is one of those things that makes me feel sick in a bad way.

A 1972 student film called Zorgon: The H-Bomb Beast from Hell (9 mins.), reuniting a few of the major players from The Equinox (plus a young Rick Baker), is a dreadful waste of time and only a minor curiosity, while a tribute to Dave Allen excavates a lovely (if trite and sort of poorly-written) stop-motion fairy tale called The Magic Treasure (19 mins.) and a neat Volkswagen 4-door 411 commercial (1 mins.) showcasing Allen's obsession with King Kong. Around a half-minute of "Test Footage" supplements the Volkswagen spot and an all-text tribute written by Duran about his late friend and colleague ("One from the Heart: Recollections of The Magic Treasure") accompanies The Magic Treasure. Meanwhile, Chris Endicott contributes a text rumination on the legacy of animators working for the Cascade ad agency, creators of stuff like the Pillsbury Doughboy, the Jolly Green Giant, Mrs. Butterworth, Swiss Miss, and Mr. Peanut. An extensive stills and advertising gallery is something I would normally skim or skip altogether, yet as I started perusing the printed materials (whole articles reproduced, title cards with extensive historical data offered as context), I found that an hour had passed with me enraptured. The abovementioned trailer and two radio spots round out the sterling presentation. Originally published: August 14, 2006.