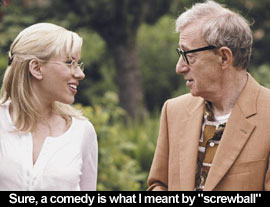 by Walter Chaw Woody Allen's stock had been falling when the surprising restraint and structure of the frankly-just-decent Match Point temporarily staunched a hemorrhage of appalling failures. Call Scoop a return to form, then, with Allen doing Allen again to rapidly-diminishing returns, spicing things up this time around with a teeny dose of post-modern self-deprecation that seems not so much thoughtful as pathetic. The Woodman plays a fast-talking, stammering, Catskills comedian calling himself "The Great Splendini" (for the "square haircuts," he Rickles) who, as Allen is wont to do nowadays, acts as the panderous mentor for a hot young couple. What's most shocking is that a puff of dust and cobwebs don't erupt from his mouth every time it creaks open to deliver another pun about Trollope/trollop and Ruebens/Rueben (the corned beef and sauerkraut variety). Otherwise, it's The More the Merrier ad infinitum: the old fart helping a couple of good-looking kids get their groove on--with the twist of a Jack the Ripper subplot woven awkwardly into the narrative. It's far easier to identify the Victorian rake as Allen himself, what with his vaguely pedophilic sleights-of-hand lurking in every frame. That's not necessarily bad if the film's about a Tom Ripley sociopath (à la Match Point), of course, but it's pretty bad when it's a piece of fluff starring his favorite new obsession.

Said obsession: Scarlett Johansson, perhaps the most gifted and voluptuous, old-fashioned siren this side of Monica Bellucci, shoehorned here into the role of mousy journalism student (cum dental hygienist) Sarah Parentsky and forced to jabber Allen's fossilized patter in a way barely resembling classic screwball. Katharine Hepburn and Rosalind Russell are namedropped, which is of course terribly unfortunate because Johansson, in appearance and function, is a lot more like Marilyn Monroe in Monkey Business than like Ginger Rogers in same. (If you believe for a second that sultry Johansson is up to the light comedic chops of Diane Keaton or Mia Farrow, you're either not paying attention or don't have a working pair; Allen, take note.) Woody doesn't miss the chance, however, to twice soak Johansson, head-to-toe, doubling his Match Point output of drenchings, so maybe there's lascivious method to his madness after all. For a guy who takes pains to mention Freud once or twice per comedy, Allen should think twice about regularly dunking women younger than his daughter/wife in his pictures.

Sarah is in Britain to interview a famous director, whom she promptly shags in the local vernacular while, simultaneously, veteran reporter Joe (the great Ian McShane) kicks the bucket, takes a ride on the Styx express, gets the scoop that aristocrat Peter Lyman (Hugh Jackman) might be strangling prostitutes, and swims back to the mortal plane to tell a journalist. Soon, Sarah and Splendini (a.k.a. Sid) are masquerading as daughter and father to infiltrate Peter's garden parties and gather "clues" with which to validate their supernaturally-acquired information. Don't ask me why. I lost interest a long time ago. Allen can't write jokes anymore and he's never been able to write thrillers, so Scoop ranks among this year's most poorly-written, terribly-plotted pictures. The editing is sad but I'm guessing there wasn't a lot to work with: scenes shot at the magic hour aren't imbued with ineffable light but rather murky and shot through with grain. If it doesn't bother you that Allen hasn't taken much care with the technical aspects of the film, it might bother you that the key to the mystery is found not once, but twice (maybe thrice) in exactly the same hidey-hole, thus making the heroes idiot-naïfs and its villain a cast-iron moron. Or, maybe it'll irk you that the only thing Allen and Johansson port from the screwball tradition is desperation, leaving grace, timing, wit, and chemistry behind in a deflated pile.

Though Johansson is flat awful in this picture, I blame the arrogance of Allen's screenplay: she's so conspicuously wrong for this film that the fact of her casting becomes the one consistently diverting thing throughout. Consider that the only audience Allen's writing his alleged comedies for anymore he's already outlived or disenfranchised--any tittering in the audience is more than likely born of pity and incredulity. That Jackman emerges unscathed should cement his position as heir to Cary Grant's romantic comedy crown, because if this giant piece of shit (and Brett Ratner) can't make him look bad, nothing can. (Ditto McShane (doing his best with the indignities of Allen's kitchen sink spirituality), whose legacy is already cemented by his incomparable run in HBO's "Deadwood.") Scoop is painful. It's about five steps slow and in the wrong gear besides, every punchline flat, every moment with Allen and Johansson abrasive and embarrassing. But when the film at last mercifully squeezes off its anemic trickle, it at least has the decency not to linger long in the mind. Originally published: July 28, 2006.

The film is lightweight but a pleasure to watch. Not sure how to reconcile a murder mystery with light comedy, but Hollywood has done that since "The Thin Man." (Well, probably even before that. A long time, anyway.)