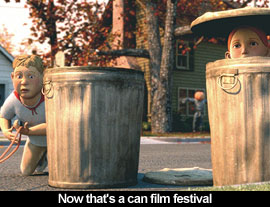 by Walter Chaw There's a lightness to the heroes of Monster House, as well as a certain callous insouciance in the way the film handles itself as a metaphor for puberty, but the effects for the titular monster and the care with which it sketches the human monster living inside it make the picture fascinating. When it's humming, above and below, the contraption identifies the malady of adolescence as loneliness, as becoming an outcast caste of one ("This is why we sit by ourselves at lunch"), if in mind only. It knows the sudden, emboldening rush of recognizing a girl's charms, and it sees in friendship the bonds and courage that time hasn't yet had the chance to disdain. None of this is surprising, particularly, especially since its executive producers are Robert Zemeckis and Steven Spielberg--who, between them, have fashioned some of our finest monuments to the cult of childhood. But then Monster House throws a curveball and makes its bad guys...tragic. And not just tragic but unbearably tragic--tragic enough that they become ennobled through their tragedy; by the end of the film, with its surprising declaration of "freedom," what could have been a trite affirmation of the ironic swap of the fears of childhood for the anxieties of the teenage years is transformed into a more ecumenical discussion about how life is sacrifice and love is sometimes unrequited, and about loyalty to causes in which we believe and the people in whom we invest ourselves.

It plays especially like a Ray Bradbury story (or like Stephen King's It or Dan Simmons's Summer of Night), a tale from a carnival in the October Country of the house on the block that's home to the crazy old guy who keeps the kites that stray into his yard. Our boy DJ (Michael Musso) and his portly pal Chowder (Sam Lerner) have an encounter with said crazy old guy, Nebbercracker (Steve Buscemi), who, in the picture's most surprising moments, develops a backstory and manifests a wife (Kathleen Turner) encased in concrete in a caged tomb sealed with a heart-shaped padlock. Dark stuff (Jungian, too), with the house/monster's innards a jumble of skeletal ductwork and pilfered toys and its maw a swirl of peristaltic planks. (After the Sarlacc throat of Pirates of the Caribbean: Dead Man's Chest's Kraken, the curious synchronicity of vagina dentatas swallowing heroes whole announces something like a new variety of femme fatale in 2006.) As for real women, there's a teenage babysitter whose personality is authentically that of a teenage girl (Maggie Gyllenhaal, fantastic) and an ally (Spencer Locke) given the chance to show some stones before being reduced to the kiss-dispenser and object of desire.

That carelessness with the relationships between its central trio--dorky hero, fat goofball, girlfriend--is Monster House's weakness, and we find ourselves straining to see the secondary characters (including a Renaissance Fair loser who plays video games in convenience stores). A pair of slapstick cops don't offer much to the authority figure sweepstakes, while DJ's parents (Fred Willard and Catherine O'Hara) are essentially absent, meaning that the references to the inability of the adults to comprehend the enormity of the kids' peril feel perfunctory and slight. There are a lot of missed opportunities in the picture, most of them falling on the one side. Visually it's awesome, though, the conclusion especially impressive and frightening (the film as a whole is surprisingly scary, even with a placating curtain call)--and though the characters are motion-captured using the same technology Zemeckis employed for The Polar Express, the design itself is pleasantly stylized. But when all's said and done, you wish the film had been about Nebbercracker and his girl, because no one is interested anymore in this thing about the skinny kid who gets the girl and the sloppy comic sidekick along for the ride. Including the filmmakers. Originally published: July 21, 2006.