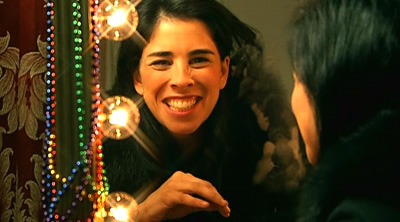 by Walter Chaw It starts off on the wrong foot and never recovers, this first showcase for the brilliant Sarah Silverman to strut her aggressively, pointedly offensive stuff. Something about the deadpan seriousness of her delivery sells jokes about being raped by her doctor ("A very bittersweet experience for a Jewish girl"), about the "alleged" Holocaust, about how the best time to have a baby is "when you're a black teenager," or about how she'll always remember 9/11 as the day she discovered how many calories were in a soy chai latte. And that you're never meant to know with absolute certainty if she's aware exactly how horrible are the things she's saying could be part of the schtick.

But what separates Silverman from many a shock artist is that there's an incredible amount of wisdom embedded in her rants--a genuine sympathy for gender difference and pressures ("I don't care if you think I'm a racist, I just hope you think I'm slim"), a conversance with the taboo of bodily functions ("My asshole is purely decorative...I tell people I was shot"), and an understanding of the offenses committed on both sides of the culture wars. The joke that famously got her in trouble on "Conan O'Brien", not retold in the film, is that in order to get out of jury duty she wrote "I hate chinks" on her summons. Fearing that it made her look racist, she amended it to read "I love chinks, and who doesn't?" One of the very few classic jokes about paternalism vs. bigotry in the popular conversation, it's among the smartest bits of writing in any medium on the issue of race since Fassbinder.

Unfortunately, Sarah Silverman: Jesus is Magic, a concert film executed in roughly the same manner as Comedy Central's unwatchable "Pulp Comics" series, never finds its pace and, consequently, never allows Silverman to be anything more than a pretty girl saying naughty things. The jokes are the same, but the timing is ineffably thrown, enough so that the only barb left in the thing is the suggestion that Silverman is an insufferable narcissist--though even that's defused by grinning asides. Consider the last shot of the film proper (there's an extended credits sequence that still doesn't make the film's 72-minute running time seem like feature-length), wherein Silverman soul kisses her reflection in a mirror for an eternity before cracking up and flashing her pearlies at the camera. See? It's all a joke! And the joke's on Silverman! Isn't she a good sport? Yet protesting her innocence defuses her subtext, doesn't it? In this mad desire to not be taken seriously, suddenly Silverman comes across as ignorant and run-of-the-mill crass. It might be in that shift in paradigm that her jokes are suddenly toothless, replaced by uncomfortable silences and bursts of nervous laughter.

Already lame, the movie gets lamer with a series of conceptual "music video" vignettes that find Silverman performing a few of her novelty songs in different costumes and in literal environments. However good the writing, the execution is god-awful; a post-credits rimshot of an impossibly awkward understudy bombing, hard, with Silverman's material is a too-close commentary on exactly the same things that went wrong with the body of the picture. Jesus is Magic is really too bad, both because I know that Silverman is better than this and because this thing is awful enough that it may preclude another chance for her to prove it. Relegated to smirking cameos in crap like Rent and School of Rock, Silverman might be doomed to life as a cult hero and a mainstream flame-out (especially if her upcoming cable show fails to showcase her scatological smarts). Then again, when you can somehow make Margaret Cho's concert movies look like Pryor on the Sunset Strip, maybe that's what you deserve. Originally publishded: November 11, 2005.

THE DVD
by Bill Chambers  Visual Entertainment presents Sarah Silverman: Jesus is Magic on DVD in a 1.78:1 anamorphic widescreen transfer. The film was shot on digital video and looks to have bypassed celluloid on the way to disc; saturation is vivid and most of the artifacts--hot whites, edge haloes--are obviously native to the source. Par for the concert-film course, the Dolby Digital 5.1 audio is clear and ambient but sounds simultaneously bombastic and shrill during the musical interludes, which is most certainly the nature of the songs themselves. Meanwhile, a feature-length yakker pairing Sarah Silverman with her director Liam Lynch is a sure-fire candidate for THE ONION A.V. CLUB's "Commentary Tracks of the Damned." Here, Lynch struggles to say something articulate, and Silverman's stony silence throughout much of their "dialogue" suggests the kind of embarrassment that comes from being caught in public with an outcast to whom you've become acclimatized in private. She's so much smarter than Lynch that you're kind of pulling for him, but then he says something along the lines of "You have, like, the most awesome subtleties," and you just want to stuff him in the nearest locker.

Most of the movie's edginess passes without comment, though Lynch admits his attraction to the project stemmed from a shallow desire to shock his, like, friends and, like, family. But at least we now know why the film's vignettes aren't funny: because Lynch, like, thinks everything is funny. Working with actors for the first time, he's a kid in a candy store with zero sense of discretion. Also on board, an interminable fly-on-the-wall making-of (36 mins.), some of whose footage found its way into the closing credits of Jesus is Magic. Like the movie itself, it's rudderless and narcissistic, and somehow laughing at Silverman's racist epithets from this privileged behind-the-scenes vantage point makes us an unwitting accessory. (The boyish Lynch, for what it's worth, isn't fooling anyone with his bevy of tattoos.) The Christmas-themed video for Silverman's "Give the Jew Toys," a 6-minute excerpt from The Aristocrats featuring Silverman, and the trailers for Jesus is Magic and The Aristocrats round out the disc. Originally published: June 12, 2006.